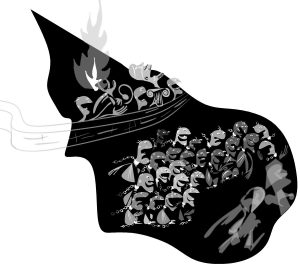 In contemporary analytic philosophy the word ‘exists’ has a very limited meaning: the things which exist are, more or less, the referents of our referential language. If I say ‘over there is a skyscraper’ then I take there to be such things as skyscrapers. And I take my sentence to pick-out, in all that is, that which is a skyscraper (ie. that my sentence refers to a skyscraper). This kind of existence does not presuppose any global nature to ‘Being as such’, nor does it connote any global understanding of what makes such existence possible. To say ‘there are skyscrapers’ is to say there are things of the skyscraper kind, but it is not to settle larger metaphysical questions about whether skyscrapers are ‘dream-skyscrapers’ or ‘just-skyscrapers’ (to distinguish between the case where we are in a dream or not).

This first-order existential language then is metaphysical in the sense that it provides the explanandum for metaphysics: is it that which is to be explained. The vast majority of metaphysical systems (varied enough to include Plato, Hume, Hegel, Heidegger, Quine, etc.) thus pay special attention to referential language or ‘first-order existential language’ as I have described it. The key questions about our ‘world-talk’ are: what makes such talk possible? What is the nature of the things it entails? How does our world-talk refer to the world? Or more generally, what is the relationship between world-talk and the world? Throughout the history of metaphysics then, philosophers have been motivated to provide a metaphysical framework in which to situate talk of this kind.

The key opening gambit in metaphysics here is in Plato (of course) whose parable of the cave begins by framing the duality (there being two) of world and world-talk as a dualism (consisting of two parts). For Plato, life is very much like being trapped in a cinema only seeing images of the world rather than the world itself. We’re to suppose it’s possible to leave the cinema itself, to ‘visit reality’ and to be amazed and astonished that we ever thought movies were ‘the real thing’.

It’s first important to note that this parable outlines a second-order framework for analysing first-order language. It says that language of the kind ‘there is a flower’ should be read as referring to movie-flowers (shadows) not Real flowers (forms). So there is two sense of Real here, the first order sense: there are, of course, flowers. And the second order sense, but these flowers aren’t Real flowers. This notion of ‘Real’ then, of there being a second-order real, can create a lot of confusion. Plato’s Flowers are merely real, but not really Real.

Claims of the kind ‘the table before me, and all tables, are just illusions’ should be decomposed into two kinds of claim then: 1. there are tables 2. all the things which are tables are illusions. Thus, for example, old scepticisms should be understood as a position which buys into a dualism of the Real and wishes to deprive many or all objects of Reality in the second-order kind: objects could be dreams, matrix-code, or anything else.

However contemporary scepticisms in analytic philosophy are usually presented as anti-realisms which deny the first order kind of reality (they don’t care to, or don’t presuppose a Really real and merely real). So an anti-realism about, say, electrons isnt saying ‘yes there are electrons, but like everything else, they are shadows on the wall’ it’s saying, ‘no there are no electrons; electron just refers to a piece of mathematics’.

It seems plausible initially, at least, that we should be satisfied with first-order reality – so where do second-order notions of Real come from? It is my claim here that they arise due to a confusion in first-order talk (and I think, must necessarily arise this way). Sometimes language refers: ‘over there is a cat on the mat’ is referring if there’s a cat on the mat – if I say it now however, sat in a chair in a room with no cat, such a statement is not referring. There is no cat (and indeed, no mat). So we have a duality in our world-talk, there is talk that ends up being referential and talk that ends up being non-referential. This duality I believe has become metaphysically deified: that the possibility of non-referential world-talk is elevated to the level of an unReality of world-talk all together. Those instances where we do not find “what our words tell us to look for” are contrasted to those instances where we do find “what our words tell us to look for” and this contrast is unduly given grand status as a split in the world itself rather than as a liability of language and world-talk.

Let’s focus this problem: how could a contrast between Real and unReal (eg. Appearance) ever even be formulated? All we ever have is first-order talk: when we’re given examples of Appearances these very examples are set within the language in which Reality is contrasted. The question ‘could everything be a mirage?’ can be immediately answered: no. A mirage is something which is set in contrast to something that isn’t a mirage, to be able to ask the question presupposes that some world-talk refers to mirages and some world talk doesn’t: Appearance and Reality are in reality as just the conditions refers and does-not-refer. Appearance is that situation where you point to something and make a mistake, lie or pretend (eg. ‘there is no beer in the fridge’), you use language about the world that does not refer to it. Reality is that situation where you use referential language (‘there is beer in the fridge’) and it does refer. There are no examples to give ‘outside of’ first-order talk to evidence a second-order notion of Real.

Notice here that ‘mistake, lie, pretend’ are epistemological terms: they are about whether we know that our language refers. When I walk into a bathroom, just before I get into my filled bathtub, I believe that the water I’ve been running is hot: I think, in effect, ‘the water should be hot enough now’, but I might be wrong – the water heating system might be broken. Thus this duality concerning language is actually an epistemic duality: we are sometimes wrong in how we describe the world and we do not know, ahead of time when that will be. We may have correct beliefs (knowledge) but we don’t also know when we know (our belief that our beliefs are correct isn’t always correct). Sometimes our language refers, sometimes we’re right. Sometimes our language does not refer, sometimes we’re wrong.

Thus there is something deeply suspect when we’re asked to transpose these conditions into metaphysical divisions or dualism. We can phrase this suspicion as a question to Kant: Kant, you claim there is a noumenal and a phenomenal: a metaphysical split between what Really is and what really is, between what our words can never refer to - what we can never talk about - and what we we always talk about – but where is this split? If we assume Kant is right and we’re stick in the phenomenal (the cave) then how ever could we discriminate between phenomenal and noumenal? Where in the cave is the noumenal? It is nowhere. It is a presupposition that can never be evidenced. Kant transposes the dualism of reference and non-reference into a dualism of phenomena and noumena.

If we’re in the cave we cannot justify it’s the cave (rather than the sunlight) so why even presuppose it? Thus we should say that are no Appearances in the sense dualism supposes, second-order appearance. It can appear that there’s beer in the fridge, and I might be wrong. But the fridge itself does not Appear – nor is it Real. So what are ‘appearances’, if not ghostly objects floating on top of the noumena? Let’s take the classic example of an appearance: the case where a stick appears bent because it is in a glass of water. Notice here everything is, globally, exactly how it should be – the way the world is, the layout of stuff we’re referring to with our language, is correct: how else could we have discovered refraction, if upon further investigation we found an Appearance of bentness and not refraction!

Appearance enters when we interpret the world, produce world-tallk - appearance is in the form of the proposition ‘the stick is bent’ – we take the situation to be one of bentness but we’re wrong, it’s one of refraction. We then contrast refraction and bentness and call one ‘Real’ and the other ‘Appearance’ but this isnt evidence of a dualism but a duality – our language doesn’t always refer. The bent stick isnt a lens which gets us outside reality and into Reality to see that there is Real and Appearance. The world is always exactly as it should be, it never Appears to be. Appearance is a feature of our descriptions of the world.

Interpretation of the world, production of world-talk, is the act of describing what there is (correctly or incorrectly). If we are inside a cave then world-talk is a description of what there is in a first-order sense only – it might be that outside the cave our first-order objects end up being something else ( ‘interpreting inside a cave’ might be called phenomenology). However if we realise that it doesn’t even make sense to presuppose this dualism, to presuppose we’re in a cave, then first-order interpretation is the final interpretation (‘interpreting in the sunlight’ might be called hermeneutics). There is no ‘Real’ to speculate about and thus no science of appearance to suffer – our world-talk is talk of the world simpliciter.

Michael Burgess participates in and organizes several philosophical groups in the UK and has recently completed graduate work in physics. He is presently writing on issues in metametaphysics with a view to graduate study in this area, and has written and presented on a variety of other topics: from academic articles on Leibnizian historical interpretation to machine learning in a quantum computing context.

Illustration by John Holbo at examinedlife.typepad.com.