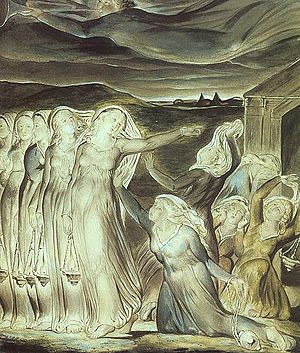 Andreas has reminded me of my challenge on the parables episode for folks to give us your most innovative/bizarre interpretations of The Ten Virgins parable.

Here it is copied from Wikipedia:

Then the Kingdom of Heaven will be like ten virgins, who took their lamps, and went out to meet the bridegroom. Five of them were foolish, and five were wise. Those who were foolish, when they took their lamps, took no oil with them, but the wise took oil in their vessels with their lamps. Now while the bridegroom delayed, they all slumbered and slept. But at midnight there was a cry, "Behold! The bridegroom is coming! Come out to meet him!" Then all those virgins arose, and trimmed their lamps. The foolish said to the wise, "Give us some of your oil, for our lamps are going out." But the wise answered, saying, "What if there isn't enough for us and you? You go rather to those who sell, and buy for yourselves." While they went away to buy, the bridegroom came, and those who were ready went in with him to the marriage feast, and the door was shut. Afterward the other virgins also came, saying, "Lord, Lord, open to us." But he answered, "Most certainly I tell you, I don't know you." Watch therefore, for you don't know the day nor the hour in which the Son of Man is coming.

Clearly the story here is about improper tooth brushing technique. Now you have to keep in mind that in the olden days, what with all the people getting smashed in the face by things and bad oral hygiene in general, it was about average for people to have only 10 teeth, such that if you had more than that, you were considered a heretic and "encouraged" to donate your some of your "extra" teeth to the military for use in fashioning arrowheads. Ignorance of these basic historical facts has left many unable to properly interpret this parable.

What still speaks to today's society is that often people brushing their teeth will just lightly rub the front teeth, forgetting to reach the brush into their mouths to reach the molars and even the back of the incisors. The brusher fails to "oil" the back teeth (the term "oil" is a dead giveaway if you understand that ancient brushers employed petroleum, routinely referred to in the scriptures as "black gold" or "Texas tea"), and so when the "bridegroom" comes (this referring to The Doctor, who with his strange blue box can be seen throughout history, albeit often with a glamour to distort historical records of him, though in this case his presence in Jesus's time is clearly indicated by the lack of a Doctor Who episode about Jesus that would settle the "historical Jesus" questions once and for all... Clearly the Doctor's presence has only been revealed by the modern historical record in less controversial settings such as when he discovered the moon to actually be a giant hatching egg), then he will "not know," i.e. not want to smell, those back teeth, since they are decayed and smelly. Don't just wait for gingivitis! Be prepared, says Jesus! Sound advice, and it's good that Jesus used the parable presentation so that everyone could understand, except of course only those in the know get to understand, as was Jesus's intention.

While my account above clearly leaves no room for other interpretations, I encourage one and all to reply to this post on partiallyexaminedlife.com with your take on the matter. The one with the objectively best interpretation will gain the Kingdom of Heaven.