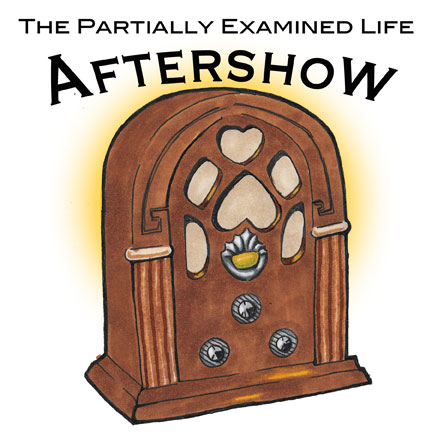 Back on March 22, host Stephen West was joined by Wes, Michael Burgess, Ken Presting (calling in from the center of a vacuum cleaner, apparently), and (after 15 min or so) Law Ware reflect further on whether hermeneutics can really give us a reading of the Bible that gives us modern folks something that's not morally backward or otherwise crazy.

This last Sunday, April 19. Stephen was AWOL, and so I jumped in (immediately after recording for three hours on Schopenhauer... I'll post about that soon) to host and more or less turned over the reigns to Michael Burgess, who wrestled with the Parables with Ken Presting (with much improved audio over the previous after show, though the first 5 minutes or so from him are rough on the ears), joined eventually Nik Burlew. I know the SNAFU in getting started on time caused some folks who planned to come to miss it, and we apologize.

So jump on over to the Free Stuff for Citizens page, click on "Not School & Aftershow Discussions," and add these two discussions to your PEL intake. Not a Citizen yet? Get on board!

What? You think Burgess is a British swashbuckling genius and want him to take over as host for the next ones? Anything's possible. Be on the look out for a wandering Stephen! Is he living under that bridge? We don't know!

Puzzled why there are only men here, or only people who are WRONG? Why, fill the lack with your own presence when next we do one of these! (To Be Announced)