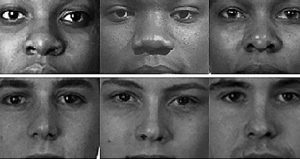 If you haven’t seen it, there is a scene in Curb Your Enthusiasm when Larry David is casually walking across a parking lot having just parked his car. An African-American man walks past him in the same direction as Larry’s vehicle. Larry suddenly turns and clicks the button on his remote keyless system, locking his car doors with a swift electronic bleep that breaks the silence like a well-timed punch line. The man turns and glowers. “Think I’m gonna steal your car?” he challenges. “No . . . it’s not you”, Larry awkwardly bumbles, “it’s not a race thing”.

Whether Larry’s choice of moment to lock his vehicle was merely inopportune or whether he was really being racist is left to our imagination. What is interesting is the peculiar comic potential in this moment. If Larry’s locking his car door was a manifestation of a subconscious prejudice, then it’s almost as if we don’t know whether to protest or to laugh at him for his bad luck.

This inherent tension in our reactions brings up an interesting philosophical question – one that is taken up by philosopher Neil Levy in a couple of postings this month (here and here) on The Brains Blog. Science shows that though a person accused of discrimination may sincerely deny harboring any kind of prejudice, their choices and actions may have been modulated by ‘implicit biases’ operating below the level of their conscious intention. Are people morally responsible, and so legitimate objects of blame, for discrimination resulting from their implicit biases?

Levy argues that, on any plausible version of the most widely held forms of compatibilism about moral responsibility, we are not morally responsible for actions resulting from our implicit attitudes. In his blog post, he focuses on what he calls "control-based" theories. On control-based accounts, whether a person is morally responsible for some action is a matter of whether they possess the right kind of control over their performance of it.

Levy dedicates considerable space to articulating exactly what is the right kind of control, but the general conclusion is that this is what is crucially missing in the types of cases in question. When an employer chooses a worse qualified male candidate for a job role over a better qualified female candidate, due to implicit sexist attitudes biasing the selection process, she does not have the sort of control over her acting discriminatorily necessary for her to be responsible for it.

This is only the gist of a much more detailed and complex argument. Rather than wading into the fine details, I’ll just make some general remarks about Levy’s overall approach.

One thing that strikes me as interesting about the type of cases Levy is concerned with – cases where a person behaves discriminatively due to implicit biases - is that they are instances of what the philosophers Thomas Nagel and Bernard Williams referred to, in two classic papers from the 70s*, as "moral luck." Moral luck occurs when a person can legitimately be treated as the object of moral assessment despite the fact that what she is being assessed for is partly due to factors beyond her control. As Nagel points out, moral luck can enter into our moral assessments in a variety of different ways. Of particular relevance here is what Nagel calls "constitutive luck," or luck in the traits and dispositions that make us up, and "circumstantial luck," which is luck in the circumstances that we find ourselves in.

Take an example. Suppose a police officer fatally shoots someone in a situation that the officer perceived to be volatile and dangerous. At the time the officer sincerely believed her actions to be appropriate and proportionate to the threat posed. However, she is confronted with evidence that retrospectively forces her to realize that in fact she acted with disproportionate aggression. Her judgment of the situation was skewed by implicit biases about the victim’s race.

In certain respects, the officer’s actions were due to factors beyond her control. Her implicit biases are the product of conditioning by an environment that was, to a considerable extent, not of her choosing. Equally, that she found herself in a situation that made manifest those implicit attitudes in such a drastic way can also be attributed partly to factors beyond her control. Nonetheless, we would still expect someone in her position to feel a terrible form of regret over her actions.

In his paper on the topic, Williams talks about "agent-regret." Agent regret is different from what he calls "bystander regret," – the regret that someone with a spectator’s perspective might feel about some event - in that it is constituted by the subject’s first-person thought that it would have been much better had she chosen or acted otherwise. Agent-regret is also distinctive in the ways it is expressed. For example, it might include a desire to compensate a person for the harm they were done. Speaking of a lorry driver who, through no fault of his own, hits and kills a child, Williams writes, “we feel sorry for the driver, but that sentiment co-exists with, indeed presupposes, that there is something special about his relation to this happening, something which cannot merely be eliminated by the consideration that it was not his fault."

In a section of his later work, Shame and Necessity

, where Williams is discussing Oedipus’s discovery, in Sophocles’ Oedipus Rex, that he has unwittingly killed his father and married his mother, Williams explains this special relation between the agent and the event thus – “in the story of one's life there is an authority exercised by what one has done, and not merely by what one has intentionally done."

Returning to the example of the officer, while we can acknowledge the tragedy of what happened, we would also expect her to experience profound agent-regret over what she did. Such an attitude cannot, and should not, be alleviated, cancelled out, or swept aside as irrational in light of the sorts of considerations adduced by Levy. Were the officer to merely feel a bystander’s regret because she was persuaded that she lacked the correct sort of control necessary to make her morally responsible for what happened, we would probably think that something was badly wrong.

One of the things that Williams thought to be especially important about examples of moral luck is that they show that there is something seriously out of sync between what he called the "peculiar institution" of modern morality and human moral psychology. That institution is founded on a related cluster of concepts – voluntariness, intention, control, blame and blameworthiness, amongst others – which it is the object of a great deal of contemporary moral philosophy to analyze and define. The consequence is that, for all its rigor and ingenuity, a great deal of contemporary moral philosophy does not really resonate with us on a personal and psychological level. It simply does not speak to the reality and particularity of our inner ethical lives.

(available as a PDF here), and the Nagel article appears in the 1979 collection Mortal Questions. A video of a lecture summarizing Nagel's article is available here and here.

Gil Percival is the producer of UK philosophy/comedy podcast, The Philosofa.