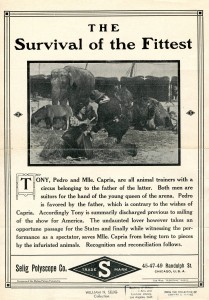 “I came to the conclusion that selection was the principle of change from the study of domesticated productions; and then, reading Malthus, I saw at once how to apply this principle.” – Charles Darwin

“It seems that Malthus legitimized the idea of a law of struggle, impressed Darwin with the intensity of struggle, and provided a convenient natural mechanism for the changes which Darwin was studying in the selection of domesticated varieties. It gave Darwin the analogy he needed to move from artificial to natural selection, and this was the essential step in his reasoning: indefinite variation and natural selection could produce new species.” – Robert Young

Robert M. Young (1935 – ) is an American-British Marxist, psychologist, and historian of science who is best known for his contextualist approach to the history of evolution, an early instance of what would later be called standpoint theory. In a series of essays written between 1969 and 1973, he argued that scientific theories, like all other products of the human mind, arise out of a specific social context. For this reason theories necessarily incorporate the values and concerns of the people who create them, and can only be understood as an expression of their personality and concerns, which are themselves expressions of their specific historical context. Therefore, if we want to understand evolution (he argued), we need to understand the history of Victorian England.

In order to do this, we need to look at England a generation or two before Darwin published Origin of Species (1859). During the 1790s France was convulsed by revolution, the leaders of which were confident that philosophy had revealed the laws of government. They believed that a perfect society could be created on earth. But in the midst of wars, conspiracies, and repeated frustrations, they turned against each other, and a Terror killed tens of thousands of Frenchmen. Later, French armies led by Napoleon overran most of the continent, leaving Britain virtually alone. In the midst of this war against left-leaning France, Great Britain defined itself as a conservative power. One Briton, Thomas Malthus, wrote an Essay on Population (1798) which undertook to show why French-style plans for “the improvement of mankind” were doomed to failure. His argument was that if the state instituted living-wage laws, workers would get married sooner and have larger families. As a result, there would be even more workers in the next generation, and so more people who would have to be paid an artificial wage. But as the real value of their labor plunged, the net drain on the economy would increase. After a few generations, the population growth would become unsustainable, leading to a population crash (or “Malthusian catastrophe”) in which nature would forcibly correct the misguided policy of the reformers.

Great Britain rapidly industrialized during the first decades of the 19th century. As workers began to organize in order to press for better working conditions and higher wages, employers sought arguments that could be used to keep wages low. Malthus’ arguments were extremely useful for this purpose, and for generations Britain’s conservatives recast it as “the Iron Law of Wages.” Charles Darwin was descended from wealth on both sides, and, like most people from his background, he was impressed by Malthus’ ideas. He took a copy of Malthus’ essay with him on his voyage, and recorded in his autobiography that he had his insight after reading Malthus’ essay. As Robert Young pointed out, his theory has many other connections to his time and place. Darwin’s emphasis on the importance of competition has some obvious parallels to the laissez faire industrialism of Victorian England. Just as every business owner competes for scarce resources and strives to bring the best product to market in order to secure them, every species has to compete for scarce food and mating opportunities, and over the generations tends to produce the adaptations best suited to survival. And, just as failed businesses go under and are replaced, failed species go extinct and are replaced by more fit competitors. Indeed, Origin is steeped in the language of not only laissez faire, but also imperialism. The full title of the book is On the Origin of Species by Means of Natural Selection, or the Preservation of Favored Races in the Struggle for Life. At a time when European states had conquered about 4/5th of the earth’s surface, no educated reader could possibly doubt which races had been “favored” in the “struggle for life.”

According to Robert Young, the natural thing for people living under a capitalist system is to see the free market as a reflection of natural law. This is how it was in fact interpreted by theorists such as Herbert Spencer and Francis Galton, who, like Darwin, took it for granted that laissez faire capitalism was the best form of production. However, there are reasons to think that causation actually runs in the other direction. It’s a truism that people often see what they want to see, and the fact that all of us are products of the same type of society as Darwin doesn’t help matters. We have, in other words, a built in bias to see things his way, and this has been powerfully reinforced by Darwin’s addition to the modern pantheon of “great men of science.”

Darwin, a white, male, sexist, imperialist millionaire, was in every way a member of the elite. So it is perhaps unsurprising that he liked to think of nature in terms of competition. After all, competition had worked out very well for him, and this explanation had the pleasant byproduct of transforming his success from an accident of birth to scientifically proven superiority of inheritance. When other biologists took a look at Origins, many of them concluded that while competition in nature was real enough, Darwin had overstressed it. Most of Darwin’s observations took place on the South American coast, where competition is indeed fierce in the densely-packed rain forests. In other environments, such as the frozen plains of Siberia, animals often work together, because the chief danger to their survival does not come from one another, but from a hostile environment. Indeed, as Peter Kropotkin pointed out in Mutual Aid (1902), cooperation, not competition, characterizes much of what goes on in nature – such as symbiosis, social organization of insects like ants and termites, and, indeed, human society. In general the most successful species on the planet are not loners living in ruthless cutthroat competition with one another. They cooperate because groups are often more effective than individuals. That we tend to think of nature as “red in tooth and claw” is, on this reading, a byproduct of the ruthless laissez faire business ethos of Victorian England, not a product of nature itself (which few of us have any prolonged experience with, and so are not really in a position to evaluate.)

A consequence of this view of Darwinism is that "social Darwinism" is not a narrow-minded misapplication of legitimate biology to politics and society. Rather, "Darwinism is Social" (stress in the original title) - that is to say, it is a legitimate application of Darwin's ideas to society. On this view, Malthus' writings were political in the first place. Darwin applied them to nature, and then his contemporaries applied them back to politics. Because the idea of natural selection was political from the beginning, it of course had political implications. The output and the input were essentially the same, only the output was tremendously magnified, because the opinions of Thomas Malthus had been transformed into *scientific facts,* from which dissent could not possibly be rational. This transformation (carried out by prominent social Darwinists such as Herbert Spencer, Ernst Haeckel, and T.H. Huxley) allowed conservative politicians to plausibly claim that they were merely applying the laws of nature to society by setting up laissez faire economic regimes and pursuing imperialist wars abroad. In politics as in nature (they could say) might makes right, and success is its own vindication. This view became unfashionable during the first and second world wars because of its association with German militarism. The war transformed "legitimate science" into "a crude misapplication of Darwin to society," which is the status it retains today. Its role in American and British imperialism and laissez faire was either forgotten or repudiated, and applications of biology to politics were disallowed. However, as the generation that remembers the war and its atrocities is passing, Herbert Spencer, Ernst Haeckel, and other Social Darwinists are being rehabilitated by conservatives in a renewed effort to claim the legitimation of science for laissez faire and imperialist policies.

According to Robert Young, the view that ideology and science can be separated was and is a fiction - people do not stop having political opinions when they put on lab coats and look through their microscopes. Try as they might to be objective, they can never quite succeed. A different political system would have (and in fact did) produce different theories of nature. Needless to say, such a contentious view has not gone unchallenged, and the issue is further confused by Robert Young's explicit Marxist commitments. However, his work remains a landmark (for better or for worse) within the field of Darwin history, and is a prime example of the "externalist" approach to history of science, which stresses connections between context, theorist, and theory.

Daniel Halverson is a graduate student studying the history of Science, Technology, and Society in nineteenth-century Germany. He is also a regular contributor to the PEL Facebook page.