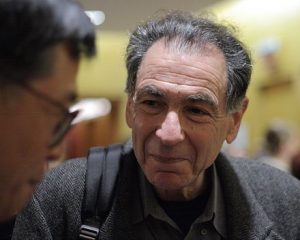 "Quantum mechanics broke the mold of the previous framework, classical mechanics, by establishing that the predictions of science are necessarily probabilistic." - Brian Greene

Paul Forman (1937 - ) is a German-American historian of physics and curator at the National Museum of American History. In a series of papers written in the early 70's, he argued that quantum mechanics emerged from an "antirational" Weimar culture, and that much of its weirdness can be attributed to that "antirationalism."

Before World War I German science in general, and physics in particular, was seen as an instrument of national prestige and power. A country with great scientists was cutting edge, modern, and worthy of respect. And in fact during the war German scientists made discoveries (such as artificial nitrate fertilizer and, of course, poison gas) that contributed to the war effort.

Because German science held such a prominent place in the prewar culture, and had contributed so powerfully to it, it could not escape the fallout when the war ended in disaster. German physicists, the argument goes, needed a way to reestablish their prestige, and this meant repudiating their prewar past in order to make room for an up-to-date theory that would not be tarnished by earlier failures. Nothing had been so characteristic of that past as Newtonian mechanics, which had always been somewhat suspect in Germany as a product of British materialism. The British were supposed to be a "nation of shopkeepers," and their science a dead, artificial, way of looking at the world. The obsession with dissecting, analyzing, and classifying was felt to rob life and the universe of their intrinsic majesty. German literature and philosophy had long stressed the importance of a holistic, intuitive view of life that could explain its mysteries without damaging or dissecting it. After the war a new mania for a romantic "life philosophy," which rejected the mechanical and mechanistic attitudes of the British in favor of an experience-based, intuitive holism became fashionable. The new attitude was "don't question, don't look for purposes—be what you are, and find fulfillment in that." As Nietzsche put it, "love your fate." On this understanding a physicist did not study the universe in order to find a more efficient way of making widgets or for any other crudely instrumental purpose (like the British physicists), but as a form of self-fulfillment. In other words, because he was a physicist. His activities required no other purpose or explanation, and this was felt to be a healthier attitude toward life.

The postwar disillusionment gave physicists a powerful motivation to reinvent their theories as a German product in order to differentiate themselves from the British (who had just starved several hundred thousand German civilians with a naval blockade and imposed a ruinous peace at Versailles) and from the failures of wartime Germany. The new model, developed in the mid-20's, incorporated the values of a good "life philosophy" by rejecting causality as the principle explanatory mechanism. Instead, Erwin Schrodinger, Max Planck, Werner Heisenberg, and others, created a new approach to subatomic physics which made probability the essential explanation. On this view, events at the subatomic level do not occur for any particular reason—sometimes a particle decays, sometimes it doesn't. Sometimes an electron is here, sometimes it's there. There's no reason for this—there are only probabilities. Similarly, an electron is neither a particle nor a wave until it is observed, but at that moment it becomes one or the other; a cat left in a box for a week is neither alive or dead, but becomes alive or dead when the box is opened. Subatomic particles, like German physicists, simply do what they do. What matters is not why they do it, but how.

This new approach reestablished the prestige of (some) German scientists by bringing German physics into line with the Germans' conception of themselves as an especially spiritual people. Parallels between the weird acausality of quantum mechanics and the more general culture of Europe just before and after the war are perhaps not difficult to find. In these same decades Freud was undermining the idea of man as a rational and self-determined agent, while Virginia Woolf and James Joyce were abandoning the objective and neutral observer view point in literature, and Picasso and Mies were offering fragmented and disorienting perspectives in visual art. Einstein, who resisted quantum mechanics all his life, had played his part in the cultural transformation by dethroning Newton. While he thought he had saved absolutes from a subjectivist tide (he once proposed calling his theory invariance theory), the world disagreed, and turned relativity into a celebration of subjectivity. Even in mathematics. L.E.J. Brouwer was creating a new approach which rejected a classic tenant of logic, the principle of the excluded middle. In the first decades of the 20th century, the Newtonian order, focused as it was on linear causality in a rational universe, was being fatally undermined by a new mood which emphasized the importance of difference, perspective, and irrationality. While it might be tempting to come to Newton's defense on this count, we would do well to remember that much of our own perspective has been shaped by that transformation. It is not easy to convey the force with which narrow 19th-century ideas of nation, class, race, and gender were believed in by, and imposed, upon, the people of that time. Relativity and quantum mechanics both have real predictive superiority over Newtonian mechanics, and that is an irreducible part of the reason why they replaced it.

Viewed in this light, quantum mechanics is a human product, and cannot be understood apart from the values and motivations of the men who created it. What actually goes on at the subatomic level is unknown and unknowable—what we can know is whether or not our theories yield usable and predictive results. It is not inconsistent to say that a human creation can yield predictive results—we do not have to make a choice between "opinion" and "fact"—only between "useful" and "less useful." Historians of science continue to debate "The Forman thesis" almost fifty years after its original publication. It remains a classic of the sociological approach to the history of science.

Daniel Halverson is a graduate student studying the history of Science, Technology, and Society in Nineteenth century Germany. He is also a regular contributor to the PEL facebook page.