Three years ago, philosopher Thomas Nagel published a book called Mind and Cosmos, for which he was immediately pilloried by mainstream intellectuals, and which The Guardian called the most despised science book of 2012. Psychologist Steven Pinker was among the intellectual coterie to criticize the work, taking to Twitter to lament "the shoddy reasoning of a once-great thinker." Nagel made several controversial claims in his 2012 book, including the claim that if natural selection cannot account for curious features of the universe such as consciousness, moral values, and the human capacity for rational inquiry, then there must be some other mechanism that allows for these capacities, some hidden laws or forces that move in the direction for an improved moral and cognitive capacity. He dubs his perspective natural teleology.

Natural teleology (NT), the view that nature unfolds in a certain direction, is not widely accepted explicitly, but it is possible to discern a tendency toward this conviction among mainstream intellectuals. Most often, the view held by these intellectuals is that that the current time in which we live is the best of all periods and that our planet will be even more hospitable to conscious beings like ourselves in the future, thanks to our increased rational and moral capacities. NT is exemplified in any number of major works, including The Expanding Circle (1981), The Moral Landscape (2010), The Rational Optimist (2010), The Better Angels of Our Nature (2011), and The Moral Arc (2015). Rather than believe God's invisible hand is guiding the universe, proponents of NT think that when we crunch the numbers, we find that human beings are becoming more intelligent and more moral all the time.

Immediately, there arise questions of value and of fact regarding the NT worldview, as well as certain logical questions about what implications to draw. Regarding the latter, suppose it is the case that intellectual capacity, as measured by IQ or the equivalent, is increasing. (As far as we know, this is correct, and is a phenomenon known as the Flynn Effect.) Does it follow that our faculty for abstract reasoning will make the world any more livable? And since abstract reasoning is different than concrete reasoning (think of the difference between reasoning about an immediate situation as opposed to a hypothetical situation), it is conceivable that our intelligence will make us overconfident about the intuitions we already have about the world.

The intellectuals who profess NT presume themselves to have already won on questions of fact. Pinker's work The Better Angels of Our Nature, endorsed by Facebook founder Mark Zuckerberg and Microsoft CEO and philanthropist Bill Gates, was perhaps the most instrumental in making NT as a worldview palatable. The book establishes—through a series of quite impressive charts and graphs, and a litany of data—that, slice it any way you like, violence just looks to be declining. The trend seems to hold across millennia, centuries, and even down to the decade. Yet not long after the 2010 publication of his work, Pinker was accused of manipulating the data. Some of the contrary evidence has come out but has not been seriously addressed.

Take this graph of Pinker's, for example, which purports to show the per capita decline in violence over the second half of the 20th century. The long-term trend is apparent: large spikes in the 40s and 50s followed by ever smaller spikes down to our current century. 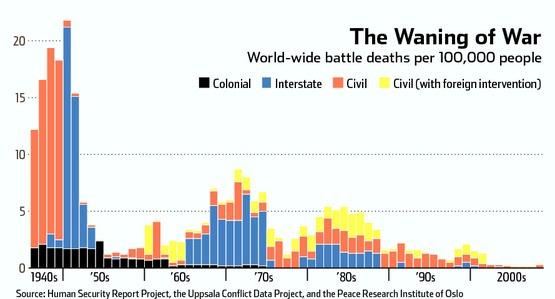 Erik Kain in Forbes, however, found that the data set looks considerably different when we exclude the bloody early 40s, that is, minus the five armed conflicts that occurred the first decade of the second half of the 20th century. 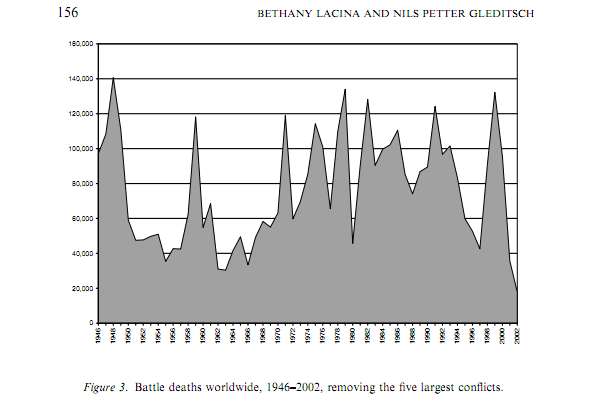 Now, what had previously looked like a signal of significant decline in violence looks an awful lot like noise. Kain goes on to show that Pinker's focus on per capita deaths attributed to war and armed conflict ignores the fact that the number of armed conflicts in the world has actually been increasing, even if the number of deaths per capita has been decreasing. 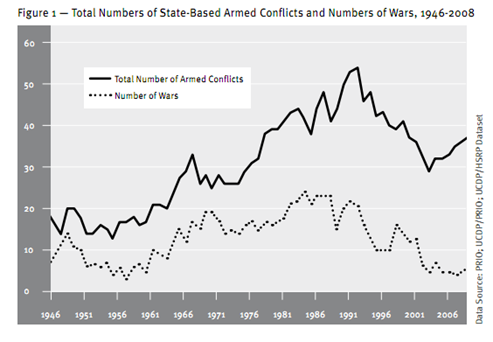 We can return to questions of logic, asking whether something equivalent to the Flynn Effect exists for morality (whether we now have an increased moral capacity), and if so, if it follows that this capacity has actually led to an overall decline in violence and harm to other people in the real world. This has yet to be borne out. What is true is that the number of deaths per capita has decreased. However, if we assume, with anthropologist Brian Ferguson, that war and violence are fundamentally means by which elites (and in our world, state powers), gain control over material and social resources, there cannot be any other conclusion than that war and violence from pervasive political and economic powers have increased as scientific and technological innovations have provided more efficient means to control resources. That elites have not been able to kill larger numbers of people in the process because populations have grown so large, or because it's not necessary in order to gain access to world resources, is sort of a happy accident.

Turning to questions of value: Even if we all agreed with the data and assumed that these proponents of NT have relied upon appropriate metrics, it would still remain an open question as to whether we ought to accept the status quo that has brought about such great and wonderful changes in science, technology, and moral respect, or if we should actively push against it. The NT intellectuals are equivocal on this point. On the one hand, they have to acknowledge that several of the changes to our intellectual and moral culture have been brought about by pressing against prevailing norms with rational inquiry and social democracy. These independent thinkers, nonviolent resistors, women suffragists, African American civil rights protesters, and others, some of whom we call heroes, are all responsible for bringing about the rights we enjoy today. This much has to be granted by the NT intellectuals.

On the other hand, the NT intellectuals would prefer a moratorium on some of these moral issues. Glancing at Pinker's Twitter feed, for example, there is a link that reads, "Stop obsessing about inequality. It's actually decreasing around the world." And this is in spite of the fact that if you read the article Pinker retweets, its author Marian Tupy, a senior policy analyst for the Cato Institute, actually acknowledges that in America, "the income gap between the top 1 percent and the rest has grown." Yet he, and one assumes Pinker also, would prefer you look at the bigger picture, as though a decrease in income inequality worldwide should be enough to comfort a poor American living in a country with widening inequality. Standing with Pinker is the author Michael Shermer, who has just written The Moral Arc (which he regards as a kind of sequel to Pinker's book), and who has written of what he calls the pervasive myths of income inequality. Shermer assures us in a recent article that the "American Dream of Income Equality Still Lives." The data show otherwise.

The new tool of the mainstream intellectuals is data-mining that reinforces the way things already are while privileging the many ways in which people have worked to make things the way they are. This is a natural teleology that views Nature's arc as bent toward truth and justice, without a god overseeing any of it. The belief in NT functions to justify the status quo, and is no less silly (or perhaps more so) than the argument of 18th century philosopher Gottfried Leibniz, who believed that our world is, in spite of all apparent evil, the best of all possible worlds. Not even Thomas Nagel, whose natural teleology intellectuals like Pinker and Shermer inadvertently ape, believes that the direction of the universe tends toward goodness. Nagel wrote in Mind and Cosmos that since "the emergence of value is the emergence of both good and evil, it is not a candidate for a purely benign teleological explanation: a tendency toward the good. In fact, no teleological principle tending toward the production of a single outcome seems suitable." Perhaps it would have been better if mainstream intellectuals spent less time excoriating Nagel and more time minding that they not make similar mistakes, or worse.

Billie Pritchett is a writer and English lecturer with interests in moral and political philosophy, philosophy of social science, and phenomenology. He maintains his own blog called si hoc legere scis… and is on Twitter via @b_pritchett.