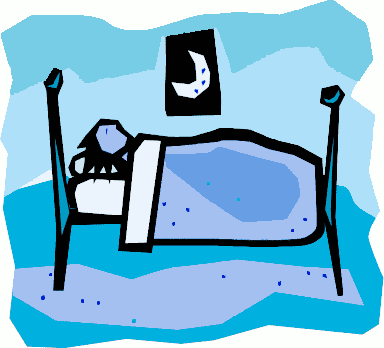 Listen to "Sleep." Also, listen to the solo version from Spanish Armada (1993).

This is a love-turning-to-stoicism song, written and recorded originally for my first solo album in the summer of 1993, with an easy-but-impressive-sounding finger-picking style that I had just figured out at the time. It's got some of my better lyrics and a good dose of sincerity, and is one of my favorite tunes from that album, such that I put it at the end of our sleepy Husserl episode.

I had the idea maybe nine months later to use a different guitar-strumming style (which I'd used on other recent tunes), give it a beat, and turn it into a bouncy, harmony-driven Crowded House sort of thing, so I recorded a demo with guitar and 3 vocals that I liked enough that I stuck it as-is on my 1997 album of weird-sounding stuff, Black Jelly Beans and Smokes (here's that version). I never had a band that was harmony-inclined enough to learn that arrangement (and the original arrangement was too mellow for a band), so it never actually got the Crowded House treatment, but what with us doing Freud on dreams, well, I don't have any other songs so appropriate to the topic, so this was a natural choice to revive. In addition to the obvious (i.e., sleep), there's some Freudian weirdness here: the whole idea of "I sleep for you," when I was not in this case sleeping with the love object in question but merely in longing. A symbolic dedication (perpetual sacrifice) of the self in place of libidinous release? Something like that.

Rather than simply do a new recording that would have to recreate some nice gestures whose original flavors I rather like (I'm not sure I can sing that high at this point anyway; it would certainly sound very different), I opted to record new drum, bass, 12-string lead guitar, and keyboard tracks right over the existing Black Jelly Beans recording. Though I located the 4-track tape source and was prepared to remix it (as I did recently with "Green Song" and "Samuel"), that seemed too much effort, and I'm frankly used to hearing the voices mixed the way they are and didn't want to re-think that, even though I could have then applied pitch correction to each voice, corrected some places where the vocal rhythms aren't quite together, and (most importantly) fix some rhythmic spazziness in the guitar.

Here's what excited me about doing this (apart from my finding that version really hypnotic with building tension): I've been playing drums constantly for the last few months (historically, not the instrument I've been most competent at) and was looking for an excuse to record them. Since this song was recorded without a click track, and gets really pretty spazzy toward the end with a massive speed-up, it was a challenge to record a part, and really the same challenge that I posed to my poor drummer Steve back then, when I would record the first part of a song like that and give it to him with the expectation of being able to match it. Luckily, I now have digital editing, which allowed me to tweak my performance to be somewhat more in line with said guitar "in post," as they say, even though it sure would have been nice to just tweak the guitar instead (which I could not do much of w/o also moving the vocals, which would sound weird, though I did this anyway in a few small places). In any case I was able to match the speed-up with my actual performance, and what you hear here is just two drum takes spliced together. The other instruments were added quickly, with me using my old method of writing and recording a phrase at a time, or in the case of the keyboard, one measure or even one chord at a time.

So, here's yet another song that I've now finished, which I wasn't aware actually needed finishing, as a number of my projects over the last years have involved remixing/remastering/resinging old tunes, or completing half-written ones, as well as finalizing half-recorded ones. As an overall status update: My three albums with New People are all shiny, mastered, and available on Spotify/iTunes/etc., but none of my solo stuff and other band stuff is. I've got all the MayTricks albums on my website (early 90s), along with Black Jelly Beans and my two band albums from Austin (late 90s: here and here). I've nearly completed The Sinking and the Aftermath now (an album begun and mostly recorded in 2000; you can hear the completed songs here), and likewise only have a few songs yet to finish for the Madison Lint album (early 2000s) (those songs are here). Also in the 90s, I started a solo album to be called The Cheese Stands Alone where I'd play all the instruments, and though there are still several tracks intended for that album that I haven't recorded at all, I now have enough new recordings to complete both that album and an entirely new solo album where I'll put the fancier, band-sounding tracks that currently grace the top of my songs page.

So that's four albums that need cover art (any artists out there want to help?), and preferably some professional mastering (at around $20 a song), and a couple more besides those that I'd like to pay CDBaby to put on iTunes/Spotify/Amazon/etc., (which costs, last time I checked, $50 including a UPC code). Given that I have no band members to split these costs with (most expensively, I'd also like to actually have a few of the tunes for the new album professionally mixed, which for our New People albums cost about $200 per song), I'm thinking of running a Kickstarter campaign this summer to see if I can raise the funds to do some or all of this. If you'd like to chip in, you needn't wait; there's a Donate button at the top of my songs page. 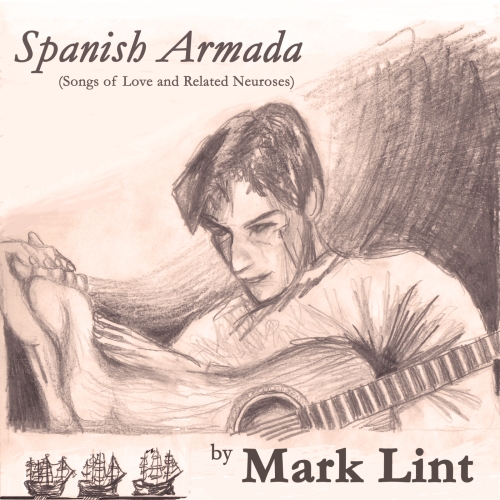 The album left out of the recap above is the one that "Sleep" originally appeared on: Spanish Armada (Songs of Love and Related Neuroses) (released 1993, between MayTricks albums). This album has not been all that well represented on the podcast due to its age (i.e., comparatively poor recording quality) and its being a largely a stark guitar-and-vocal affair, but I was very proud of it at the time, and it's a very personal document that deserves at least as much as my other poorly recorded, early-90s albums to be made available in full. Last night I finally got around to scanning and Photoshopping the original art (by a friend of mine named Geoff Rowland: a pencil sketch based on an actual photograph of me with my guitar and a girl's foot, though you can see he took some anatomical liberties here) into a new album cover (this had only previously been released on cassette, with art that could be photo-copied... not fancy color-copied, but grimy regular photo-copied at Kinko's on cardstock at 10 cents or so per page).

What prevents me from re-releasing that album is the capacity for sonic improvement. Back in 2012, I accessed one the original stereo DAT tracks (meaning I recorded straight to digital audio tapes, not grimy 4-track tapes, so the source files should theoretically be immaculate, but I think I still used my 4-track as a pre-amp, meaning I plugged my cheap microphones into a cheap device to raise their volume high enough to be recorded and then recorded that to a pristine, hiss-free source) for one of these songs, "Don't Forget Where You Are," and managed to process the guitar and vocal tracks separately and remix them with some nice, modern effects to create something that sounds reasonably good. Doing this with all 18 songs from that album would take some doing, and because only about half the album was recorded in that particular way (the album also featured some stark tunes like the one at the end of episode 7 that used more than two tracks), the end result might sound problematically inconsistent. So, as always happens in the face of something problematic, I procrastinate.

I apologize as usual for the overshare here, and realize that people wanting to read about Schopenhauer are not generally going to care about the details of my little musical non-career, but it's helpful for me to write this stuff down and invite those of you that might be interested to keep my company in my world of intermittent striving. (If any of you are musicians that are interested in contributing to remote recordings, drop me a line!) At this point, I've probably spent more time fretting about all my incomplete creations and wasted potential than actually creating/finishing things, but making my tunes into free riders on podcast episodes has provided some healthy directedness for this part of my life.