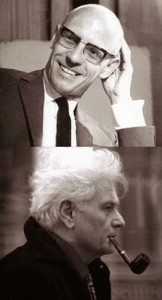 This is the first of a two-post series, the second can be found here.

It's probable that one could not find a weaker defense attorney for the cogito, or for what's called the Cartesian subject, than Jacques Derrida. The author of Of Grammatology, Derrida is known as the founder of deconstruction, a mode of critical analysis or hermeneutics that problematizes and complicates the act of reading and demonstrates how books cannot be reduced into comprehensible meanings, but rather can only provide us with “meanings” or “ideas.” (Derrida is infamous for his liberal deployment of quotation marks.) That said, in his book Writing and Difference, Derrida delivers a rather cogent interpretation of Descartes's Meditations on First Philosophy, an interpretation that remains faithful to something as suspect as Descartes's “intentions.” He does this in response to his mentor Michel Foucault, who, in his book Folie et Déraison: Histoire de la folie à l'âge classique, misinterprets Descartes and commits the fallacy of contextomy (quoting out of context, or quote mining).

All of this revolves around three pages that Foucault would later exclude from the abridged English translation of Folie et Déraison titled Madness and Civilization. Derrida responds to those three pages, which only returned to print in English in the posthumous 2006 translation entitled History of Madness. (A full account of this publishing history, provided by Alan Cook, is available at the end of this post.) What was at issue in these three pages was the role Descartes may or may not have played in the suppression of madness in western culture. It seems to me that the treatment Descartes receives was not only an error, but is symptomatic of an error in Foucault's project overall. Foucault's attempt to protect madness from the tyranny of reason, to pull off the impossible trick (as Derrida put it in Writing and Difference) of making “madness the subject of his book in every sense of the word,” required Foucault to posit an ontology so that the mad subject could neatly sidestep the usual epistemological problems that plagued the madman's reasonable counterpart. To put this more plainly, Foucault claimed that the mad have been cast out of the garden of reason and sent to a world quite apart from reason, which, as oppressive as it sounds, was actually a boon for the madman.

Here's the Foucault passage in question: 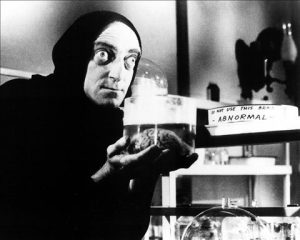 The evidence Foucault gives to justify this conclusion is this quote from Descartes's Meditations:

Foucault argues that Descartes's rejection of madness was not merely rhetorical, but was a perhaps unconscious philosophical position. Foucault claims that, for Descartes, the possibility of madness need not lead us to doubt our faculties as dreams do or as flaws in our sense organs do, because any claim to reason requires the philosopher to presuppose that he is in a superior position to those who are mad. This exclusion of the mad from consideration is, for Foucault, just another example of how modernity and humanism robs the world of the wisdom that people of earlier ages could find in madness. What's being excluded is a way of being in the world, a certain subjectivity of madness. And what's worse, from a philosopher's perspective, is that this presupposition of a total difference or separation between madness and reason is unjustified. But, as Derrida points out, Foucault is misreading Descartes, and badly. Derrida critiques Foucault in a chapter entitled “Cogito and Madness” from his book Writing and Difference:

Descartes has just said that all knowledge of sensory origin could deceive him. He pretends to put to himself the astonished objection of an imaginary nonphilosopher who is frightened by such audacity and says: no, not all sensory knowledge, for then you would be mad and it would be unreasonable to follow the example of madmen, to put forth the ideas of madmen. Descartes echoes this objection: since I am here, writing, and you understand me, I am not mad, nor are you, and we are all sane. The example of madness is therefore not indicative of the fragility of the sensory idea. So be it. Descartes acquiesces to this natural point of view, or rather he feigns to rest in this natural comfort in order better, more radically and more definitively, to unsettle himself from it and to discomfort his interlocutor.

To emphasize this again: Descartes wanted to doubt everything that could be doubted. He did this doubting in an effort to discover what, if anything, he would not be able to doubt. The goal was to find a reasonable and justified premise for a true and reasonable understanding of the world. Along the way, Descartes doubted many self-evident truths, among them that he had a body. In fact, what he demonstrated was that most of the then-current beliefs could be thought of as mad or unjustified, merely self-serving delusions. He demonstrated that what was taken to be reasonable was, in fact, mad. For instance, Descartes suggested that, while it seemed reasonable and not crazy, one can't be sure about what one is seeing or feeling because one might be dreaming.

In order for Foucault's argument that Descartes posited a sane subject and relegated madness to a lower level—one not worthy of philosophical investigation—to be proven out, we would have to claim that there is a significant difference between being forever in a dream and being mad, a difference between delusion and insanity. Madness becomes something other than a cognitive error in this reading. Madness is justified—not by means of an innate truth, but simply by default. That is, if there is a subjective position we can call mad that is not merely a subject that holds unjustified beliefs about the world, then this subject must hold beliefs that are justified by something other than reason. 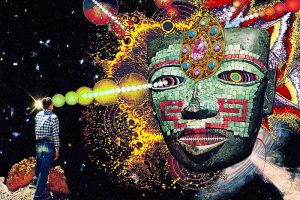 For Descartes, the possibility of always being in a dream, the misapprehension of the world, was madness, and his Meditations on First Philosophy included a process wherein he demonstrated how many of our common beliefs were, in fact, quite mad.

What Descartes ultimately claimed to discover was the reason that remained even if one posited that one was indeed completely mad. What Descartes found in his argument “I think therefore I am,” was a starting point that could not be undone and that applied in every context, even an insane one.

And it was Derrida, the master of deconstruction, who reaffirmed Descartes's original argument and insisted that Descartes be interpreted correctly.

. For 40 years, this is the only version available in English; it omits the discussion of the cogito.

—In 2006, the entirety of Histoire de la folie is finally translated into English as History of Madness

. It includes all the material that has appeared in either of the two French editions.