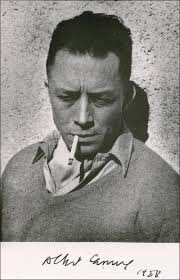 Albert Camus often gets lumped in with twentieth-century French existentialists, a crew known for its hardline atheistic membership. But Camus was something different, something much more blasphemous: an agnostic who wouldn’t revere God even if He did exist.

Camus’s primary concern with God centered on the notion of divine justice. Could an otherworldly justice redeem this world, justifying its suffering? Many answer in the affirmative, with the caveat that this higher justice does its redeeming in a way that lies beyond our comprehension. God’s ways are “mysterious.” The notion that a higher being enforces our values, albeit in a way we can’t understand, is profoundly comforting. And it makes it easier to see why we should be good, as it provides external validation for our values.

But this “mystery” business didn’t jive with Camus. A form of justice that he couldn’t understand didn’t have any meaning to him. If what we mean by human justice differs from divine justice, then divine justice isn’t justice, in our terms; it’s meaningless. Camus’s ability to understand something and the meaningfulness of that thing were inseparable. The suffering of the world, then, can’t be redeemed. Human values are not reflected either by the world or by the divine, and without something beyond-the-human reinforcing their validity, things get shaky: questions of whether we should care about anything or see any meaning in our own seemingly random values have a way of popping up, or, for some of us, forcing themselves down our throats.

Miserable, right? According to a Pew Research poll released last year, a slight majority of Americans think that belief in God is necessary for morality to exist; in 21 countries of the 39 surveyed, a sweeping majority answered in the affirmative. But Camus didn’t start acting like a dick because of his inability to revere God or believe in divine justice. He found something else to believe in—not in spite of his blasphemous agnosticism, I don’t think; rather, this position shaped his ethics.

Providing a clear picture of Camus’s ethics is difficult, because his style was more lyrical than rigorously systematic (which leads some philosophiles to claim that he wasn’t a philosopher, but those people can go home and make out with a picture of Kant), and he didn’t offer a list of specific rules to follow. I find it helpful to talk about the development of his ethics alongside Aristotle’s virtue ethics for some framing.

For Aristotle, beings are good at being the type of being they are when they live in a way that fulfills the function for which they are specially equipped. For humans, he decided that function is to act on our rational principle (which means doing boring stuff, like being moderate in all things). When we do that well, we achieve eudaimonia: a state of flourishing, being the best human beings we can be. It’s a life well lived, and it’s glorious.

In Camus’s writing—particularly, The Rebel and The Plague—we find a different “function” emerge (to put it in Aristotelian terms, which Camus did not): Human beings possess values—we have ideas of justice, dignity, and good that are profoundly important to us. We’re unnatural in that way, and this, more so than any “rational principle,” distinguishes the human from everything else. And, while being alone with our values can be a huge downer, it also points out what flourishing might look like for human beings: living in a way that upholds those values, not just because we can, but especially because we’re the only ones who can. Basically, if Jesus isn’t taking the wheel, that’s all the more reason for Carrie Underwood to get really good at steering and to do it all the time, especially when shit is hitting the fan. And just as people die when they don’t take the damned wheel, values die when we don’t uphold them.

We can color in with a bit more detail what Camus’s eudaimonic human being—the upholder of values—might look like. In The Rebel, he writes about an inherent sense of dignity human beings have, a line that is not acceptable to cross, a sense that our lives matter and that we have the right not to be oppressed. I think that, for Camus, behaving justly means acknowledging and respecting that line both in ourselves and others. That means not causing suffering, working against suffering, and just not being a dick in general. He calls for solidarity with our fellow men, which I think takes us a step further. For Camus, the value of human dignity outweighs any goals of religion, state, or cause; we’re more strongly bound to one another than we are to country or Good Word or ideal or other transcendent entity. As the beings that value, there is no overarching entity that is more valuable than the human. We end up crossing other people’s dignity lines when we place these other things on a pedestal and value them more than our fellow men.

Camus, the blasphemous agnostic, was a lover of human beings and defender of solidarity founded on inherent dignity. Camus had an ethics.

We don’t need to believe in God to believe in good. I have no doubt that Christian and other religious beliefs can inspire an ethics of love for human beings. But for many of us, those roads are closed. The connection between our ability to understand and our sense of meaningfulness is too strong. Without something to believe in, some of us despair; if the world is unjust and nothing redeems suffering, then our values are unsupported and our good deeds are mere drops in a bucket. Camus showed me, and doubtless many other little heretics out there, that we’re more than doers of small deeds in the face of a cold and heartless world that renders our actions pointless. Every act of upholding value imbues the world with a dimension that it would lack without that human rebellion against indifference. We’re carrying the fire. And, I hope to God, taking the wheel.