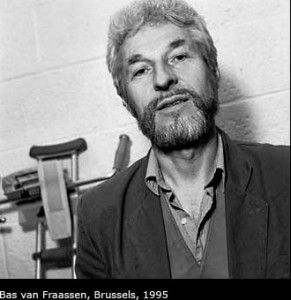 This post in the eleventh in a series on Science, Technology, and Society. The previous post in the series is here, and the following post is here. All posts in the series have previously appeared on the Partially Examined Life group page on Facebook.

"What we represent to ourselves behind experiences exists only in our understanding."

Bas van Fraassen (1941 - ) is a Dutch-American philosopher of science at Princeton University, famous for a unique form of scientific agnosticism called constructive empiricism, meant to steer a middle course between constructionism and realism.

The constructionist account of science emphasizes context at the expense of theory, while the realist account takes the opposite approach. For constructionists, a theory is a useful story about experience—that we have one theory and not another is the product of a historically contingent process. Just as three different people who witness the same event can tell three very different stories about it, three different societies can tell three different stories about experience. These stories can be very different, yet all offer an adequate account of the evidence. Therefore theories describe the context in which they were created at least as much as they do anything real about the universe. Because every theory emerged from some context and some dry of values, one cannot be separated from the other. For constructionists, they are invented, not discovered.

Realists, on the other hand, regard scientific theories as actual descriptions of actual reality, exclusive and contradictory to alternative models. Belief in their literal truth is the only possible outcome of a rational inquiry into their nature. Context does not create theories - theories are successful precisely when they transcend their context of creation in order to describe the universe as it really is. If the scientific revolution had occurred in Ming China instead of Bourbon Europe, we would still have the same laws of motion that Newton discovered, only they would not be called Newton's laws. Context is trivial, explanatory success profound. Theories are discovered, not invented.

In The Scientific Image

(1989), Bas van Fraassen offered a different approach. Perhaps surprisingly, he did so by reviving aspects of the positivist program. Philosophy of science should, he held, be regarded as the clarification of relationships between theory and observation, language and logic. A commitment to the utility of a theory does not, on van Fraassen's account, imply a commitment to its status as truth—only to its correspondence to observation. In other words, a successful theory should be regarded "empirically adequate," a more practical standard than "literal truth."

Knowledge stops with the unaided human senses. Objects or processes that cannot be directly observed, but only "detected" with instruments, cannot be empirically known, because the senses, as such, do not and cannot observe them. Rather, the instrument does, and the senses observe what the instrument observes. Inference to the best explanation is valid in the former case but not the latter. For instance, if you hear scratching in the walls, squealing and scurrying at night, and you notice your cheese has gone missing, you might reasonably infer the presence of a mouse. You can know it because, even if you haven't seen the mouse, you could in principle, and if you wait long enough you probably will. On the other hand, if you run a large hadron collider and detect subatomic debris consistent with the theory that calls for the existence of the Higgs boson, you cannot know that the boson actually exists, because you have not and cannot see it. What you can know is whether or not your theory is "empirically adequate."

Because many, if not most, of the things with which science has to deal cannot be directly observed, the central question of science is not "What is the truth about nature?" but "what counts as an empirically adequate explanation?" This in turn is largely a question of context. Rather than ask, like the constructionists, "Who created this theory, and for what purpose?" we should ask "Who is going to use this theory, and for what purpose?" In this respect, an explanation is like a tool: A good hammer is not much use for washing clothes, nor a washing machine for driving nails. Similarly, quantum mechanics is not a good explanation for time dilation, nor is relativity for the weak nuclear force.

Philosophically, the payoff for this view is that it allows the philosopher to handle scientific theories without committing himself to their literal truth, which can be undesirable for reasons we've already seen. Similarly, it makes room for constructionism and realism within the same framework. The cost is that it treats as uncertain the existence of some things, like the Higgs boson, about which scientists are reasonable certain, and for which we have good evidence. Science and philosophy of science are not entirely reconciled, but neither is van Fraassen engaged in a radical and far-reaching critique like the constructionists.