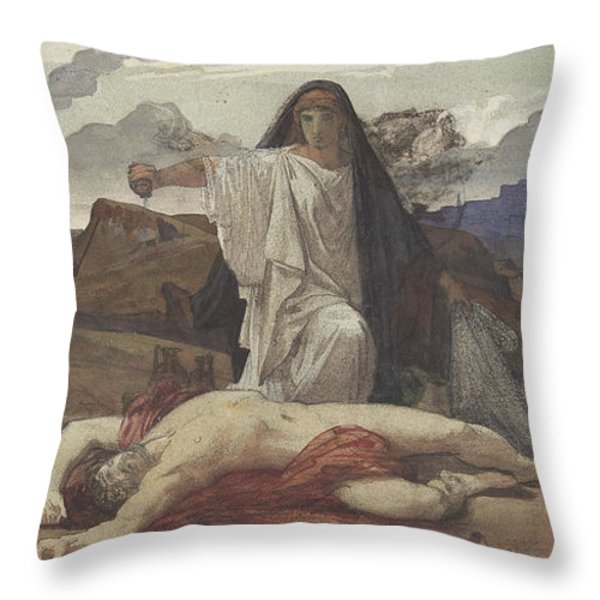 As with No Exit, I wanted to write a theme song for our little production here. Though it was my original intention to elaborate this as a disco/techno thing, it spun itself out as another folk dealie, and I ended up playing all the instruments myself.

I got to perform this live for a large family group right after writing it, and the song definitely benefited from my being able to tell a little of the story. Like most of my songs, this gives a one-sided (and in this case, anachronistic) take on the situation, and I'll admit that it was only in editing our audioplay today that I really took note of the line explaining why Antigone felt the need to twice ritually bury her brother, when she'd gotten away with it cleanly the first time:

SETH THE SENTRY: ...We went back and brushed the dust away from the body.
The flesh was soft by now, and stinking,
So we sat on a hill to windward and kept guard...

And then we looked, and there was Antigone!
I have seen a mother bird come back to a stripped nest, heard
Her crying bitterly a broken note or two
For the young ones stolen. Just so, when this girl
Found the bare corpse, and all her love’s work wasted,
She wept, and cried on heaven to damn the hands
That had done this thing.

So, there ya go. She had performed some makeshift burial rights, and was very distressed when someone brushes away her dirt. OK, so that's pretty morbid and perhaps a bit OCD, but not inexplicable. But given that this song is the voice of the chorus, one should not expect attention to detail, and they blame her for her choices even as they pity her for her fate. This is very much consistent with the play, and points to some deviance from the modern viewpoint whereby fate is supposed to be a deterministic notion that would rob one of moral responsibility. According to the ancient Greeks, you get doomed by inevitability but are blamed anyway.

Though such a crowd should not have much Freudian sophistication, the accusations of lasciviousness and cynicism often launched at Freudianism sure do apply to the crowd, as (in the song, not in the play, but yes, in this essay Wes dug up) they attribute a sexual/possessive motive to Creon. Though they're not so indelicate as to insinuate that Antigone has an unnatural thing for her dead brother, they definitely think it's weird to give up the love of real, tangible, live people (her sister and boyfriend/cousin) for either an abstract principle or a tie of loyalty that one might argue properly ends with death.

A common point of analysis in the literature, which surprisingly didn't come up at all in our discussion of the play, is feminism. Maybe that's because we seldom know what besides the obvious to say about it: Antigone and her sister should be in line for the throne but aren't, have no say in the law and how it's applied, are openly mocked for being insolent by their uncle (though that could be mostly ageist, as he spurs his son in the same manner and ultimately is convinced by old men). So, one could take Antigone as a martyr for women's self-determination, except that she's (at least nominally) fighting for gender-neutral ideals (obedience to divine law), and spurns her sister's attempt to sacrifice herself too after Antigone is convicted. If anything, Antigone is prideful, exerting herself, certainly not on behalf of all women. On the other hand, merely displaying such "manly" pride is subversive in itself, as is her use of what you might call passive resistance, though actually killing yourself within the hour after you've been put into a tomb with a few days' worth of food and apparently decent lighting doesn't sound very passive.

Anyway, it's another song with goofy lyrics that I grew to enjoy while recording it probably far more than it deserves. This was another milestone for me in competently performing drums, and one of my most confident lead guitar performances to date (albeit recorded one riff at a time). After recording the vocal and rhythm guitar, I got an opinion from a semi-famous one-time-major-label musician who advised me to de-emphasize the vocals by adding an instrumental opening and then layering my voice in a whisper with six different unison takes, all electronically tuned, which would have made it sound like a Beach Boys sort of techno Greek chorus. That probably would have been pretty damned cool, but much too time-consuming, though it did give me the idea for layering the background vocals on the choruses in the way I did (3 parts, each sung twice). That bit of feedback was least a more constructive reaction than simply coming out and saying "your voice is aesthetically unpleasant and bad for the environment; you should not sing," so I'm grateful.