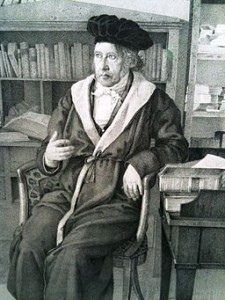 Mark W. Roche offers a convenient overview of Hegel's remarks on tragedy in his essay "Introduction to Hegel’s Theory of Tragedy." Listeners to the PEL episodes in which Antigone was read and discussed who wish to uncover more meaning from the play will benefit from his arrangement of Hegel's remarks on Greek tragedy and its context into a theoretical schema for interpreting the play. (The journal in which the essay appears, PhaenEx: Journal of Existential and Phenomenal Theory and Culture, is open access and as such is a convenient resource for anyone interested in exploring academic discussion of philosophical issues. Roche's paper is in a special edition dedicated to tragedy.)

Roche specifies four Hegelian questions audiences are to ask of any tragedy:

1) Which values have come into conflict?

2) Which positions are rooted in the past and which are harbingers of the future?

3) In what ways do individual characters embody the conflicting strands of history?

4) To what extent are forces beyond the hero’s intentions and passions shaping the events as they unfold? (Roche 14)

Listeners to the reading of Antigone and the subsequent discussions will note how the participants spontaneously asked these questions or ones very similar. In response to the question, "What does reading tragedy have to do with studying philosophy?" the answer might be, "So that one can practice being a philosopher of history in the manner of Hegel." And this answer would only be an implementation in practice of Aristotle's general principle that "poetry is something more scientific (philosophōteron) and serious (spoudaioteron) than history, because poetry tends to give general truths while history gives particular facts" (Aristot. Poet. 1451b, trans. Fyfe).

Hegel invites spectators to engage with texts in a way that the tragedies themselves, according to Aristotle, invite, and to bring a both zealous and serious curiosity to the fundamentally philosophical task of understanding the clashes between the characters and their outcomes.

Re: 1) Antigone values the family and Creon values the state, and they clash over which value is higher. (Roche 15)

Re: 4) Antigone fails to recognize that she is a citizen as well as a sister, and Creon fails to recognize that he is a father as well as a ruler (Roche 15). Applying Hegel's assessment of the characters to the events of the play, Antigone's passionate attachment to doing right by her brother can be seen as running counter to a more powerful force: the ill-fortune that hovers over Oedipus and the other descendants of Cadmus, which seems to dictate that no member of that family can do right by any other. Creon's insistence on separating rigorously the dead-to-be-honored from the dead-to-be-contemned runs afoul of other superhuman forces: the gods and the beings that serve as intermediaries between humanity and higher powers. The birds that serve as intermediaries between the Thebans and their gods cannot do their work because they are glutted with the polluting flesh of the unburied body of Polynices. Teiresias and the other augurs who read the birds' cries and their entrails to divine the future are being deprived of specimens suitable for their work. Hegel does not offer guides to Greek mythology, but a reader of the play looking for super-individual forces in the play's fictional world will have no problem finding them after imitating Hegel and searching for them.

As to the remaining two questions, Roche provides the means for inferring what might be sufficiently Hegelian answers:

Re: 3) One-sided characters who are incapable of seeing the greater whole or recognizing the presence of opposing values in themselves are fated to be overwhelmed by the totality of events as they unfold, for they are incapable of recognizing them (Roche 18). The clash between Antigone and Creon is not the product of a particular historical conflict at work in the city where the play was staged (Athens) or the city where the play is set (Thebes, the archaic city of myth and the actual contemporary rival of the Athenians). It is a clash that exemplifies a fundamental mechanism of the historical process. All one-sided views oppose the rational totality of history, and such limited particularities are fated to be overcome somehow. The particular will inevitably be transcended by the absolute realizing itself in the course of events, and another name for "transcendence" by which reason and the absolute push aside one-sided and stubborn particularities is "death" (Roche 12).

Re: 2)  It is hard to see how Antigone's passionate but narrow dedication to following tradition-ordained duties toward the dead could be a harbinger of a new cultural or political future for the Athenians who watched her die in pursuit of that end. It is equally hard to see how Athenians would see Creon's intention to found a state based on a royal dynasty, in which the king's edicts take precedence over all tradition, as anything but a regression. Employing the distinction Hegel makes between ancient and modern tragedy might help settle the question of which character is a harbinger of the future. Both the modern tragic character and the modern person find satisfaction in personal development and in achieving a subjective understanding of what the world means to them. The very ideas of a subjective satisfaction and an individualized, subject-centered concept of the world, was not part of the Greek world. The ancients identified completely with "the substantive powers and ideas that rule human life" (Roche 17). They lacked a philosophic perspective for understanding the historical origin of those powers and ideas, and to explain their persistence.

Creon's awareness of his own personal responsibility for the needless deaths around him is, perhaps, a faint harbinger of the kind of subjective and self-critical consciousness that Hegel sees as characteristic of modernity. Creon has a very rapid realization of how mistaken he has been, and makes a last-minute attempt to save both Antigone and his son, Haemon. Creon experiences a kind of personal development in that he recognizes all that he has done wrong. But are modern audiences to take this devastated ruler of a city—who has secured it against external threats and has purged it of the disruptive Antigone, but whose story is one of misery, regret, and defeated pride—as a harbinger of some kind of future for the Athenians? For the Greeks as a people? Are we moderns who listen to Antigone on a podcast somehow prefigured by Creon and what he undergoes?

There are limits to which any work of art can fit into the theoretical schema that is applied to it. And to its ability to answer the questions interpreters pose to it. Perhaps Hegel's convictions about historical conflict and progress are too far from the sense of time and change characteristic of the Greeks to tease out fully the meaning of their tragedies. Tragedies may be like other kinds of poetry, in that they possess a superiority to histories when it comes to teasing out truths that satisfy our philosophic zeal. But the kinds of truths that may be found in Antigone may not be the kinds of truths sought by a historically minded philosopher with a very particular view of both history and of philosophy's aims. Perhaps even Aristotle's philosophy is not capable of uncovering all the kinds of philosophic truth that a poetic text may hold, even a text as close to him in time as Sophocles's was.

Roche's essay presents Hegel's views on tragedy well enough for readers to apply the four Hegelian questions to Antigone or any other tragedy, and to learn thereby both the strengths and limitations of the Hegelian approach. And however inadequate a guide to Antigone Hegel may be, Roche's essay gives us the chance to follow Hegel as far as he may take us, and in doing so, helps us start our own journey toward Sophocles's tragedy.

Postscript: Interested listeners may wish to read a selection of excerpts from the texts cited by Roche that I prepared in advance of the June 28th Google Hangouts discussion. They give an indication of the extent to which Hegel's thinking on religion, history, and philosophy were bound up with Greek tragedy, the historical situation in which the plays were performed, and the contrast between modernity and the world of the tragedians.

Erik Weissengruber is a high school teacher in Toronto. He obtained his Ph.D. in Theatre History, Theory, and Literature from The University of Minnesota. There, he wrote a dissertation about playwright Howard Barker, whose "Theatre of Catastrophe" seeks to unsettle a contemporary culture too timid and falsely optimistic to represent the tragedies unfolding in it.

For more on Hegel, check out Episode 15: Hegel on History, and Episodes 35 and 36: Hegel on Self-Consciousness.