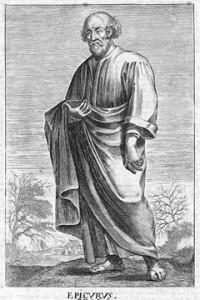 To pray is natural. –Epicurus

The plain dismissal of religion as barbaric, as primitive credulity, or as childish superstition—even if at times it exhibits all of the above symptoms, and even if its claims are ridiculous—impedes the acquisition of important insights into its varied nature and uses.

Why have most members of our species, for most of our history, been religious?

In the absence of direct evidence of the gods, some among the ancient Epicurean philosophers argued for their existence based on human nature. Polystratus, the third Scholarch (or head) of the Epicurean Garden in Athens, argued that we have anticipations of the gods (that is, we are psychologically pre-programmed to imagine them and to make them part of our reality.) I've argued elsewhere that, in contemporary terms, Polystratus's view is that this inherited instinct is a dispositional or relational property of human nature. This means that our religious instinct is triggered by certain things that exist in our environment or in our nature, just as a magnet reacts to iron, just as a moon orbits a planet, just as our bodies change at puberty and through time.

Furthermore, Epicurean masters teach that nature guides us through pleasure, so that the blissful activities that we see in the various religious traditions may be natural behavior meant to be didactic, a rehearsal for important and necessary skills. Might there be a relation between the play that social animals engage in to develop social and hunting skills and when man plays at religion, to develop social and psychological skills, perhaps growing better able to cope with difficulties?

From this perspective, nature may be giving humans useful knowledge that is both natural and necessary, via religious behavior, just as lion cubs at play learn important ambush, hunting and social skills; just as dogs and apes learn about their place in the hierarchy; just as baby chimps stretch and get their physical education, etc. Play behavior in general has a purpose: it’s not necessarily meant to be an idle waste of time. Crucial skills are frequently gained through it.

These behaviors involve bonding between the members of the social group, in addition to learning skills that help survival. It may be that the tendency to personify divine powers is a vestige of the social instinct, the same one by which infants recognize facial features from very early on; and it may also be the case that prayer and piety are ways to act out the needed social instinct for persons who are isolated or alone.

In a recent post on my blog, I discussed a papyrus where a man is saved from committing suicide by his ba, or double, a sort of guardian spirit that ancient Egyptians believed in. Let that be a case study on techniques for coping with stress in our evaluation of religion as a specialized type of natural play behavior that helps to develop coping skills, which may be required by our own nature and by our own psychological complexity.

In a series of articles at the Society of Epicurus website, I explored the Epicurean conception of piety, particularly as found in Philodemus's treatise "On Piety

." In that discussion, it became clear that Epicurean teachers believed that gods—if they do exist—do not need our worship, do not answer our prayers, and are imperturbable and in bliss, entirely oblivious to our existence. I concluded that piety is an act of self-expression and nothing more, that it’s part of our art of living, a way of articulating who we are in relation to life and its difficulties, to the virtues, to nature, to fate, etc. A naturalist understanding of religion as play that has been favored through natural selection reinforces this view.

(Humanist Press, 2014). An earlier version of this post appeared on his blog The Autarkist.