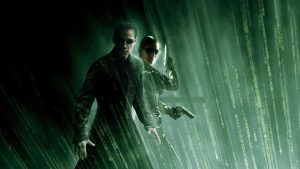 Technology is often thought of as a triumph of material realism (the concept that matter and the things made of matter exist in some fundamental ontological sense, independent of the observer). After all, it was the faith that matter has an objective existence governed by knowable rules that paved the way for the triumph of modern science and the technology that utilizes it.

Given that, it becomes a sharp irony that the advances of technology have also served to breathe new life into some of the oldest attacks on realism. For example, Descartes imagined that everything he experienced as "real life" might theoretically be illusions produced by a "malignant demon" powerful enough to deceive all of his senses simultaneously. This scenario was famously updated as the core conceit of the seminal movie The Matrix, in which a young man realizes his entire life is an illusion created not by a demon, but by a powerful, sentient computer.

It might be argued that this change is merely cosmetic, with a deceptive being from the realm of fantasy being replaced by one from science fiction. There is a key distinction however: Science fiction has the occasional habit of transmuting into science fact. In particular, advances toward the actual achievement of a Matrix-like virtual reality have progressed at a rapid pace, even in the relatively short 16 years since the movie's release. While full immersion in a wholly convincing environment is still presumably many years away, it is no longer outside the realm of likely possibility. After all, video games are already doing an eerily lifelike job of fooling the senses of sight and hearing, at least within the frame of the computer screen.

In perhaps the most notorious clash between realism and idealism (the concept that reality as we know it is fundamentally mentally created, or otherwise immaterial), eighteenth-century polymath Samuel Johnson "refuted" the arguments of Bishop Berkeley (a foremost exponent of the concept that the entire universe exists within the mind of God) by kicking a large rock. While somewhat philosophically shallow, this red-blooded affirmation of the self-apparent solidity of matter remains a favorite of those who consider idealism to be nothing more than fuzzy-headed nonsense. Yet could Johnson have evinced such faith in the evidence of his senses if he had first spent a day in a present-day virtual-reality lab, or even if he had first had the experience of spending hours enthralled by a modern, ultrarealistic video game? As our ability to convincingly simulate the world around us grows better and better, our warrant for believing in the ultimate reality of the world as we experience it must accordingly grow thinner and thinner. To put it another way, it was always possible that our world was simulated, but at one time this required belief in creatures, be they malign demons or sentient computers, that existed only in our most idle speculations. As we approach the ability to create a convincing virtual reality, however, then belief that our world might be simulated requires belief only in other creatures much like ourselves, and with little more than our current level of technology. It is this basic fact that underlies philosopher Nick Bostrom's well-known argument that there is a strong likelihood we are all living in a simulation created by (what in some deeper level of reality would be) our own descendants.

Perhaps even more alarming, however, than casting the entire nature of reality into doubt, modern computer gaming even breathes new life into one of the most persistent bugaboos of philosophy, the solipsistic fantasy. In its most extreme form, this is the notion that you are the only real person in the world, that all the other people you encounter are artificial constructs of some sort. They have the appearance of reality, but only the appearance.

Perhaps the most effective refutation of this hypothesis is that it makes no sense that an entire world, filled with people, would be constructed just for your own personal benefit. Why? And why should it take the shape that it does?

Its patent ludicrosity notwithstanding, there has long been one common realm of experience in which the solipsistic fantasy appears to be true, that being the "dream world." When you dream, you often encounter people, places, and things that seem, at the time, to have a convincing realness to them. Upon waking, however, it becomes clear that you were the only real person in that world, and that all the rest were figments of your imagination. To the dream world, we can now add an additional realm of experience that exemplifies solipsism, the single-player video game. As the player, you pilot a character through a universe that appears to have many other people just like you in it. All of the rest of them, however, are computer simulations, added to the game in the interest of verisimilitude. They exist solely for your benefit.

If simulations have become plausible explanations of the nature of reality, what about solipsistic simulations? Could the universe be a single-player video game, designed (perhaps) for entertainment? One seemingly compelling argument against this possibility is the amount of resources it would take to design a truly open-ended universe. Most games, after all, restrict the player to a fairly limited number of locations, actions, and interactions, because each one needs to be anticipated and programmed for. Common sense would seem to indicate that it would take a universe much larger than this one in order to effectively simulate our universe within it.

Even that objection, however, might not stand for long. The forthcoming computer game No Man's Sky is said to feature an algorithm that convincingly generates new environments "on demand." The game reportedly features 18 quintillion unique planets, a number so large as to be practically unimaginable. The catch, however, is that each planet is generated only as needed. It does not exist until you visit it. The practical effect is of an explorable environment of unlimited size, yet as created with a limited set of resources. This is a magic trick comparable to producing images of the Mandelbrot Set, an object of theoretically infinite variety and complexity. No finite set of calculations can actually capture the entire Mandelbrot Set, but it takes relatively few resources to view an endless array of high-resolution images of individual segments of the Mandelbrot Set. A finite viewing engine can thus offer an infinite variety of experiences (of the set). This raises the somewhat unsettling possibility that our universe could actually be a simulation located in a reality that is smaller and simpler than our own (a room-sized universe with a computer in it, for example).

Given that, it may be time for us to reach back to the idealists: not just Berkeley, whose concept that we all live in the mind of God no longer seems so far removed from everyday experience, but all the way back to Plato, who took as his central subject the crucial question of how to live a good life in an unreal universe. It is Plato, perhaps, who can offer us some perspective on questions such as "What are your moral responsibilities in a world where you might be a simulation within a simulation, or the avatar of some other-dimensional video game player?" and "How can you live a meaningful life in light of the possibility that your world might be a single-player video game... and that you might not be the player?"

Chris Sunami writes the blog The Pop Culture Philosopher, and is the author of several books, including the social justice–oriented Christian devotional Hero For Christ. He is married to artist April Sunami, and lives in Columbus, Ohio.