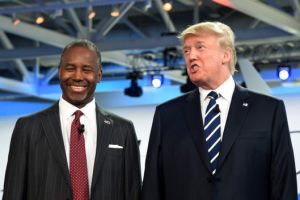 Two diametrically opposed factions in the Republican Id: the supporters of Sleepy McSleepums (aka Ben Carson), who is like a shot of morphine straight into the cerebellum. And the supporters of Donald Trump, who needs no alias because he is the most stimulating form of political snuff available without a prescription.

The former faction suffers from ataxia and dysphasia, for which the good neurosurgeon represents both ailment and cure. For normative clumsiness, he promises a form of political lassitude. He is a calming myelin sheath for the frayed nerves—and erratic impulses—of the GOP right-matter. By making them a bedtime story told in sleepy voice, he can reduce the chance that his dark political prophetics will keep you up at night.

The latter faction will wake you up in the morning. It’s not that it knows what it wants, precisely. But it does know generally that otherness must be expelled. This means not just a policy in favor of deporting and walling off illegal immigrants, but a representative whose arrogance is a way of making sure that no ego-deflating truths disembark on his own rocky shores, and functions by deporting words that give voice to every impulse that happens to come to his attention. Where Carson promises to insulate, to keep everything in, Trump promises to keep—and allow—everything out. Where Carson’s faction seems to want a containment system around the negative, Trump’s seems to desire a pure and indeterminate negativity that obliterates—er, trumps—everything in its path.

If you were to bring these factions together—if you were to fuse them—you would have created a monster that is too functional, too mobile, and too articulate to be political.