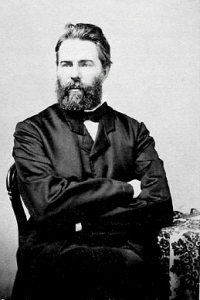 The author of a recent essay on Herman Melville’s first novel, Typee, labels the work a “hoax” and a “fraud” because Melville exaggerated or embellished various incidents of the story, which he based on actual events from his life at sea. The substance of the charge is very old news, dating back to the publication of the book. But what interests me is less the author’s timeworn complaints than his overwrought rhetoric. Why not employ a traditional, if less sensational, label? For, really, Typee is a standard work of “fiction grounded on fact,” or, better, “life spun into art.” Indeed, Melville based all but one of his works prior to Moby-Dick on his personal experiences. And even the exception, the wildly philosophical Mardi, is in a way a record of his personal intellectual experiences. The same is true of Moby-Dick, for Melville’s masterpiece may be read as an autobiographical account of his transformation from a philosophical “pondering man” into a free-spirited sage.

Moby-Dick is replete with references and allusions to Platonic philosophy, particularly to Plato’s Phaedo, which Melville had made a specific point of reading not long before beginning work on the novel. Like Moby-Dick, the Phaedo addresses many subjects at once, but as it is set in prison on the day that Socrates must drink his hemlock and die, it is foremost about the life and death of a philosopher. The opinions expressed in the work are extreme, and they revolve in particular around a total rejection of the living body: the body is the prison of the soul; the body and its desires are the cause of all evil; the body interferes with the pursuit of knowledge and virtue. For these and closely related reasons, the philosopher must purify himself by separating from the body as thoroughly as possible while alive, until death effects a literal and complete separation. The soul that has been properly purified by philosophy may even be liberated from the cycle of rebirth, in which case it will live forever after as a disembodied being among the gods. In his other works Plato consistently ranks the soul above the body, but in no other dialogue does he demean the body so entirely as he does in the Phaedo. Thus Ishmael warns all prudent ship-owners against enlisting any sailor “who offers to ship with the Phædon … in his head.” The problem, he says, is that a “sunken-eyed young Platonist” left alone at a “thought-engendering altitude” atop a mast-head will so withdraw from the corporeal world around him that he will spot no whales. The distracted Platonist may even, as Ishmael puts it later, fall into “Plato’s honey head, and sweetly” perish there.

This radical formulation of Platonism, which we may refer to as Phaedo-Platonism, exercised a powerful influence on the western philosophical and religious traditions. It comes out in the Neoplatonism of Plotinus, and of course in Christianity, too. Melville was nominally a Christian, but in his books as in his personal life he rarely let pass an opportunity to mock or criticize the faith. Typee was especially controversial for its rough handling of the Christian missionaries living and working among the Polynesian islanders. Moby-Dick carries on this tradition, and Melville even referred to the novel as a “wicked book” that he summoned with an “evil art.” In a letter to Hawthorne he identifies “the book’s motto (the secret one)” as “I do not baptize you in the name of the Father, the Son, and the Holy Spirit, but in the name of the devil.” To two young admirers who visited him in 1859, Melville insisted that “What little there [is] of meaning in the religions of present day had come down from Plato,” but despite his admiration for Plato, he expressed nonetheless his disgust with “Christendom in general and in particular.” Such sentiments infuse and color Moby-Dick, often implicitly but sometimes explicitly through Ahab’s mad rantings. Therefore one scholar has described the novel as an expression of “inverted Platonism.” The phrase is apt, not least because Friedrich Nietzsche once characterized his own thought in precisely these terms, and Moby-Dick is a proto-Nietzschean novel.

Although I have just mentioned Ahab, “a grand, ungodly … man” (to quote one of the owners of the Pequod), his lust to kill the “grand god” Moby Dick is not the Nietzschean element I have in mind. Ahab does not affirm his own life, but according to Nietzsche, the affirmation of life is a necessary condition of the superior individual’s great health. So obsessed is the monomaniacal Captain with his hatred of the white whale that he would sacrifice his own miserable self to strike the beast dead. Therefore, not Ahab, but the narrator Ishmael is the authentically Nietzschean Yes-sayer of Moby-Dick. Ahab is vanquished by the God he hates, but Ishmael survives the catastrophe to become the man who narrates Ahab’s dark fate with such sparkling insight and wit. Ishmael by his own admission was suicidal when he went to sea, but when later he tells of his adventures there, he is overflowing with vigorous life. The fact that he is able to tell the story that is Moby-Dick demonstrates his profound familiarity with those questions that Dostoevsky refers to as “accursed,” but his manner of telling demonstrates more: namely, that although as a pondering man he meditates deeply on the accursed questions, he does not regard them as accursed, which is to say that he does not suffer from them. Ishmael has attained a state of Nietzschean joyful wisdom, that wisdom which acknowledges the world-historical horror of the death of God while simultaneously identifying the event, to quote Nietzsche, as “the meaning of our cheerfulness.” The Nietzschean-Ishmaelean free spirit understands that following the death of God “our ships may venture out again,” and “the sea, our sea, lies open again.” Ishmael understands this because Melville understood it himself, and he came to this awareness a full three decades before Nietzsche announced God’s demise.

Nietzsche once called himself “the first perfect nihilist of Europe” who had, he added, “lived through the whole of nihilism, to the end, leaving it behind, outside himself.” One element of Nietzsche’s meaning here has to do with what we may call “existential nihilism,” the agitated depression of “nihilism as a psychological state,” under the influence of which “the world looks valueless.” Nietzsche left this existential aspect of nihilism behind by learning not only to accept but to celebrate its metaphysical aspect, namely the death of God, which amounts in brief to the loss of faith in cosmic meaning or purpose and divinely decreed values and ends. Melville had more difficulty with this. During the period when he wrote Moby-Dick, he was at the peak of his mental and physical health, which, combined with his liberated intellect, enabled him to attain to a state of joyful wisdom. But the precipitous decline of his career, coupled with various personal and financial hardships, laid him low. For years after the public failure of his masterpiece Melville suffered from the accursed questions, and although he later settled into a grim sort of resigned tranquility, he never recovered his youthful Ishmaelean exuberance. If in the end he died a sage, there was no longer any joy in his wisdom.

Philosophical artists and artistic philosophers, however they diverge respecting doctrinal matters, often bond beneath the surface in striving to render an ideal image of the sage. Plato, Melville, and Nietzsche were like this, each of them expressing his conception of wisdom through the mask of creative philosophy. Nietzsche insisted that “Every profound spirit needs a mask: even more, around every profound spirit a mask is growing continually.” His own uncanny literary persona was his mask, as Socrates was Plato’s, and Ishmael Melville’s. Were Plato, Melville, and Nietzsche therefore perpetrating a hoax on the public? Not at all, or rather only on those readers committed to believing in superficialities alone. Perhaps as inhabitants of a hyper-ideological intellectual climate we ourselves have come to this point, but for the sake of our collective intellectual life, for the sake of philosophy and, more, for the sake of wisdom, joyful wisdom, let us hope not. Melville loved “men who dive,” and he was a “thought-diver” himself. Let us try to dive with him, swimming out beyond the shallows to explore the depths of life and thought. The exercise may be less than fashionable today, but it is endlessly rewarding.

Mark Anderson is Associate Professor and Chair of the Department of Philosophy at Belmont University in Nashville, TN. He is the author of Moby-Dick as Philosophy: Plato – Melville – Nietzsche; Pure: Modernity, Philosophy, and the One; The Thinker-Artist (Sophia and Philosophia); and Plato and Nietzsche: Their Philosophical Art.