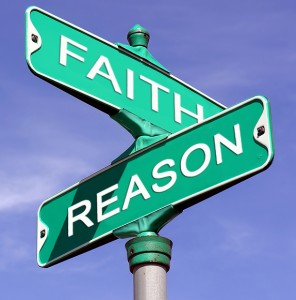 These were all published as the final chapter of the Oxford reader edited by Helm, Faith and Reason.

What is reasonableness, and is it compatible with religious faith, if we take "faith" to mean accepting a claim without evidence? Clearly, there are smart, thoughtful people on both sides of the issue, but why should that be, if one could glean correct opinions about religious matters from our shared experience of the world? Or if the evidence is insufficient either way, aren't there still some standards of reasonableness we can appeal to for what the wisest course of action to take is when we don't have sufficient evidence?

We start with Flew, who compares the situation to a court of law, where we presume innocence; likewise, we should presume atheism. Cahn tells us why believers don't care about proofs for the existence of God. Hanson thinks we would all accept as proof of God if He appeared before us publicly, which means we treat His existence as an empirical proposition and should't remain agnostic any more than we suspend judgment about never-observed physical phenomena like egg-laying bats. Westphall argues that original sin means that there is no "natural light of reason" that would allow us to objectively determine without revelation anything out religious matters.

In the second half, we focus on the critique of evidentialism in Basil Mitchell's “Faith and Criticism” (1994), Peter van Inwagen's "Clifford's Principle" (1994, from his "Quam Dilecta"), and Alvin Plantinga's “Is Belief in God Properly Basic?” (1981). We consider briefly how mysticism plays into the idea of private experience counting as evidence with William Alston's "Experience in Religious Belief" (1991), and then we consider whether you can will yourself to believe (or not) by considering "pragmatic faith" in Richard Swinburne's "The Voluntariness of Faith" (1981) and editor Paul Helm's strange rebuttal in "Faith and Merit" (1999).

For a breakdown of each of the twelve(!) readings that we covered, read the topic announcement.

End song: "Let Us Meet," a new recording of a tune written in 1994 by Mark Lint, setting a poem by Kim Casey (later Linsenmayer) to music.