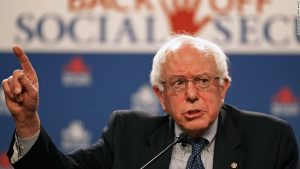 Ta-Nehisi Coates wants to know why Bernie Sanders is opposed to reparations for African Americans.

Sanders’ argument is that reparations are divisive and politically unfeasible, and that we ought to concentrate on socioeconomic policies that help African Americans by reducing poverty and unemployment and providing a free education. Coates has two counterarguments. The first is that Sanders’s socialist economic policies are just as politically unfeasible as reparations, so that political feasibility should be no obstacle for a radical like Sanders. His second is that typical Democratic socioeconomic “class first” policies “address black people not so much as a class specifically injured by white supremacy, but rather, as a group which magically suffers from disproportionate poverty”; and don’t tackle the continued effects of racism: for example, disparate employment rates among college graduates and “the fact that black men without criminal records have about the same shot at low-wage work as white men with them.” Reparations, he seems to imply, would address these problems.

Are these counterarguments reasonable?

Let’s start with Coates’s second counterargument. Part of the difficulty in assessing it is that he doesn’t—here or in his 2014 essay, The Case for Reparations—concretely define “reparations.” Perhaps they consist of a cash payout, perhaps a set of policies. Whatever the case, the value of reparations lies not in the payout or the policies. A payout would not materially address the problem of racism, and it would make little material difference in the lives of African Americans (there is no sum available that, divided among more than 40 million people, would be very meaningful to them in the long term). And the implementation of policies is consistent with the position of Sanders and the Democratic establishment (you can call such policies “reparations” if you like). In his 2014 essay, Coates acknowledges that the value of reparations is supposed to be primarily symbolic: they are meant to repay a national moral debt to African Americans. Above all, they—or the process of fighting for them—are meant to lead to a “national reckoning that would lead to a spiritual renewal”: a “full acceptance of our collective biography and its consequences,” “an airing of family secrets, a settling with old ghosts,” “a healing of the American psyche and the banishment of white guilt,” and a “revolution of American consciousness.”

In light of the purely symbolic function of reparations, it’s not hard to see why Sanders opposes them. As a socialist, he’s likely to believe that actual policies, not symbolic gestures, are the proper means for combating racism and improving the socioeconomic status of African Americans. He is also likely to believe that reparations, far from leading to a “revolution of American consciousness,” would alienate enough of the population that they would make implementing such policies much harder.

Which leads us back to Coates’s first counterargument. When Bernie Sanders says he doesn’t want to be “divisive,” he probably means in part that he wants to communicate to a large population of uneducated lower- and working-class whites that they are included in his tent. To win them over, he needs to convince them that his interest in the well-being of minorities does not come at the expense of his interest in their well-being. Above all, he needs to convince them that he is not trying to punish them.

Consequently, as a politician Sanders has much different goals than the left-leaning commentariat, which has made this demographic their scapegoat, with increasing vehemence during Obama's tenure. This demographic are referred to as the irredeemable bigots who, despite their socioeconomic status, are congenitally “privileged.” This talk is generally carried on by white people who actually are socioeconomically privileged: in one blow, they redeem themselves by confessing their collective white guilt, and redirect their fire to those white people who refuse to confess. Unfortunately, their target population is genuinely, materially insecure. Feeling guilty and renouncing their few advantages is not some symbolic game to them that they can play in their spare time, because they have nothing real to lose. They have a lot to lose, and that’s the way they’re going to behave. They are interested in themselves and their own futures, not in elevating their perceived moral status via the conspicuous ethical consumption of the plight of the marginalized. And importantly, they want to believe that their country, whatever its flaws, is fundamentally good rather than evil. They want to feel proud of their country, because identifying with its collective power is one of the compensations they get for material powerlessness.

There’s a dark side to all of this, of course, and Donald Trump’s popularity is a manifestation of it. At the same time, Trump’s demographic are well aware of the left-wing commentariat's contempt for them, and I think they are motivated in part by the idea that electing an offensive buffoon like Trump would be a delicious sort of revenge. Democratic politicians can respond to this circumstance with one of two approaches: they can, like the commentariat, write off this demographic as irredeemable bigots. Or they can try to persuade them. Bernie Sanders very clearly would like to persuade them: large numbers of them are actually registered Democrats. I also think he genuinely cares about the underclass, qua underclass. He’s willing to forgive it for being predominantly white, and he’s willing to forgive it its ignorance and parochialism. And that, I’m afraid, is why he is so irritating to the segment of the American left whose primary focus is not socioeconomic policy but punitive symbolic gestures around identity.

The function of a “national reckoning” is nominally to enlighten a population of ignoramuses. It is certainly not designed to further enlighten the large number of educated white Americans for whom holding the right views on racial issues is already a central part of their moral identity. For left-leaning white elites, a “national reckoning” would not be a renunciation but a feast of moralism that affirms everything they already believe. Its function would be to further establish a moral pathos of distance to all the ignorant white people who refuse to join them at their table: why do they refuse to eat the same cake?

The real function of a “national reckoning” is indeed to collect on moral debts. But I think the left has made clear it wants to collect them, in this case, by way of moral vengeance. The symbolic value of reparations to make a white underclass feel like bad people who live in a bad country, because their sentiments to the contrary are the only thing they have to lose. That’s something, in their insecurity, they will never do, and that is a strategy conscientiously designed to elicit their hate. This is not to say reckonings can’t be done in the spirit of reconciliation and forgiveness. It’s just very clear that this is not the spirit in which the left wants to conduct this particular reckoning. A “national reckoning” would not actually be a reckoning, but an amplified version of the same partisan battles that currently dominate our political discourse.

Coates sees Sanders as a “radical” like himself, whose views are just as self-consciously divisive and punitive. In this he misunderstands both Sanders and the American political scene. Reparations are enormously unpopular in the United States, while Sanders and his economic populism are—even if he can’t win in the end—quite popular. Absent the ressentiment of lower-class whites, they would be even more popular. Sanders actually can make inroads with the same demographic as Trump, and successful Democratic politicians always have. Sanders has also explicitly repudiated identity-based ressentiment of all stripes as a divisive distraction that allows plutocrats to maintain control. Where Sanders is focused on reparation (singular, as in atonement by way of repair)—on building “a nation in which we all stand together as one people”—Coates is at bottom focused on spiritual debt collection from a demographic that has nothing to give. Reparation (singular) includes reconciliation, and involves coming to see the interests of all as shared: it is highly ethical and highly practical. Reparations, far from changing the minds of the kind of people Sanders would like to persuade, would ensure that they continue to oppose socioeconomic policies that would benefit both themselves and African Americans. That is the potential cost of divisiveness, and that is why Sanders is right to oppose reparations.

It may sound like I’m advocating abandoning what is right because it seems politically difficult or unfeasible. In fact, I’m arguing that reparations—unlike socioeconomic policies—are not an effective means for accomplishing what is right, and they are not really intended to accomplish it. The successes of the civil rights and gay rights movements were predicated not on the punishment of political adversaries, but on an appeal to their conscience and humanity. In the case of reparations, divisiveness isn’t just their unfortunate byproduct: it is the punitive end that explains their symbolic value. If the goal is delivering a punishing salvo in the culture wars, reparations will be a very effective means. They will also be very effective at eliciting political reprisals. If the goal is improving the actual living conditions of actual human beings, then reparation—singular—is what is required.