Spring is in the air, the hydrangeas are in bloom and we're getting all topical with a seminar proposal on the US Presidential race.

Because according to Descartes, might not be real (at least in the part we're reading).

Not School May kicks off with Descartes Meditations on First Philosophy on May 15th with your humble author.

But what if you don't want any of that ethereal "Do I exist? Does Taylor Swift Exist? If so, do I have a shot?" stuff that we'll be dealing with and want to get into something so meta it's meta?

We're going topical!! Mary Ricci has proposed a look at the 2016 US Presidential race.  While some of you may think that once the Daily Show did this, it's pretty much "rapped" up (I'm not a player, I just pun a lot).  [And… hollaback to the inevitable "Ron Paul 2012!" commenters....] you can jump in with some thoughtful analysis based on position papers put forth by the candidates. 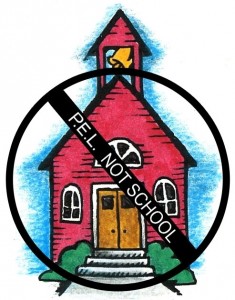 Now if you're thinking, "Brian, re: Presidential Election, I've seen this movie already and Coppola did a great job the first time, why the sequel?"  Well, you can just go straight to the source, because Apocalypse Now is one of the films being discussed in the "Film as Art" proposal.  Also, some guys named Fellini and Godard are on there, but I'm going to wait until Mr. Anthony C. Ferrante gets the credit he deserves to jump into that seminar… #sharknado.