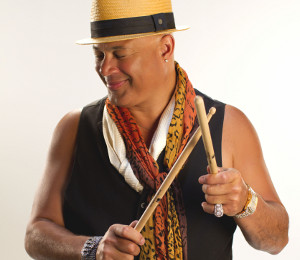 Narada started as a fusion drummer in the '70s (with Mahavishnu Orchestra, Jeff Beck, Weather Report, Santana, etc.) then released numerous solo albums and produced and wrote for artists like Whitney Houston, Mariah Carey, Aretha Franklin, and many more. He believes in working fast: creating a mood and getting the most out of it.

We discuss "Freedom" (written by Richie Havens) from Evolution

(1979, written with T.M. Stevens and Allee Willis), and the title track from Garden of Love Light

We also listen to "Billionaire on Soul Street," also from Evolution. The opening music is from "Freeway of Love" which Narada co-wrote and produced for Aretha Franklin's Who's Zoomin' Who?

(1975), and the outro music is from "How Will I Know?," which Narada produced and wrote the verses to for Whitney Houston

Listen to Narada tell about more of his experiences on the great Sodajerker on Songwriting podcast. You can watch Narada play drums and sing like James Brown back in 1980, or see this drum solo he did with the Mahavishnu Orchestra. Here's the extended version of "I Woulda Loved Ya." Watch Richie Havens improvise "Freedom" at Woodstock.

Narada talks about being influenced by Laura Nyro, and the bits of Yes and King Crimson he refers to are from "Roundabout" and (I think) "Epitaph," respectively.

Learn more about Narada at naradamichaelwalden.com.