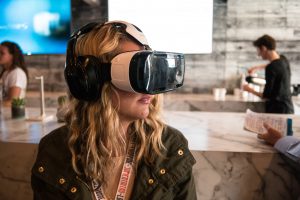 A friend of mine just got back from a conference on animal cruelty. Among scientific data and philosophical arguments against it, the audience was also offered a short "visit" to a factory farm, in virtual reality. From their comfortable seats in a Berlin University, using a phone-based VR headset, participants were transported into an exceptionally cruel environment, with the obvious aim of making them empathize with the suffering of the animals and help put an end to it. In his own words, the experience was life-changing, yet he also wishes he’d been warned of the psychological impact it would have on him. My friend left as a meat-eater and came back a vegan, but he’s now also carrying with him quite a traumatic experience, to which he didn’t fully consent.

This slightly A Clockwork Orange–esque scenario represents only one of the many ethical challenges posed by VR technology. In fact, there are so many issues around its use that philosopher Thomas K. Metzinger thinks we need a code of conduct to make sense of it.

Real Virtuality: A Code of Ethical Conduct is a fascinating paper that Metzinger co-authored with Michael Madary, which inventories a whole set of concerns surrounding VR, presents the science behind its impact on the human brain, and recommends prescriptions for avoiding possible risks—not only in terms of the ethical research of VR, but also for the (soon to be) day-to-day consumers of this technology.

As attested by my friend’s first-hand experience, virtual reality can be quite intense. Experiments such as the "virtual pit" prove the same thing: here, subjects were asked to walk on a (real, physical) beam crossing over a deep (virtual) pit. Increased heart rate and other physiological responses indicated a high level of stress and fear, showing the subjects were "really" scared, despite being perfectly aware of the "un-realness" of the experience. Apart from sensory inputs, what makes a VR experience more "real" is also social recognition. The more we are recognized by others (through their interacting with us, responding to our actions and emotional displays) as an existing person in a virtual environment, the more real the experience feels. Under what is called the Proteus Effect, people tend to behave in a way they think is expected from their avatar, or rather, in a way that is expected from the appearance of their avatar. In one experiment cited by Metzinger, subjects embodied in a taller avatar tended to negotiate more aggressively than those in a shorter avatar, and this way of being becomes more and more substantial as it is reinforced through social interaction.

But VR is not only immediately intense, it can also have long-lasting psychological impact. My friend hasn’t touched dairy since the conference, and there’s a whole set of fascinating tests that reported similar results. In one experiment recounted by Metzinger and Madary, subjects who embodied avatars looking like their future old selves tended to allocate more money for their retirements after leaving the virtual environment. Other experiments referenced in the article showcase the consequences VR experiences can have on one’s moral behavior—for instance, subjects who embodied a villain displayed slightly sadistic behavior after leaving the virtual world, whereas those lucky enough to fly through the city like Superman were likelier to show altruistic behavior. In one experiment, subjects inhabited a series of avatars with different skin colors and showed less racial bias afterward. VR use might even help counter racism, and perhaps other forms of discrimination.

The virtual environment (and hence our virtual, social selves and self-perceptions) can be quickly and easily modified, thus posing a higher risk of manipulation from political or commercial organizations. It’s easy to see how governments might wish to implement rehabilitation programs whereby offenders are made to empathize with their victims, the authors warn, but this brings about serious issues of consent and manipulation of (virtual) agency. Not only does our virtual agency and the actions we choose to take in our virtual world impact the real world, but the "life" inside the virtual reality itself is valuable, as we experience emotions "there" with the same validity and intensity as we do "here." As Metzinger writes, “Torture in a virtual environment is still torture. The fact that one’s suffering occurs while one is immersed in a virtual environment does not mitigate the suffering itself.” As a result, it might be a good idea to place restrictions on the way in which avatars can be used—although the practical implementation of such restrictions might be difficult (think of Internet piracy) and also they might veer toward censorship.

For a lot of us, debating the above might seem like a waste of time; after all, virtual reality is just for fun, it’s not and never will be as "real" as the reality we already have. This tendency to think of virtual reality as somehow lesser than normal reality is partly due to our conceptions of what "real" means, and partly because of our attachment to a certain kind of "authenticity" that our "normal" reality seems to give us. But what exactly means "normal," and can’t a virtual reality eventually become normal? As Metzinger and Madary point out:

Ultimately shallow or even largely meaningless social interactions (… think of today’s Facebook 'friendships and 'likes') are experienced as substantial by users [and] subsequently described as meaningful. A shallow form of social interaction could then become culturally assimilated and thereby 'normalized.'

As for "authenticity"—is this truly what we are attached to, or are we simply refusing to let go of the status quo? Many of you might be familiar with Robert Nozick’s "Experience Machine" thought experiment, where the philosopher concludes that few of us would choose to plug-in to the machine because “something matters to us in addition to experience” (Nozick, 1974, p. 42–45). But Metzinger and Madary ask the interesting question of whether now, with the astonishing technological advancements, that extra something could be seamlessly added to the experience. And what if, as in the counter-thought experiment proposed by De Brigard (2010)—we ask Nozick’s question in reverse: if this turns out to be the virtual reality, if you’re suddenly told that everything you thought was real is just a simulation and there’s a "real" reality out there—would you be willing to plug out?

The rest of Real Virtuality abounds with interesting philosophical questions and practical suggestions. The authors explore the consequences VR might have on our privacy, risky content such as violence or pornography, and its impact on our mental health with an in-depth analysis of mental health issues such as depersonalization and derealization disorder. Lengthy but flowy, the article is packed with much-needed research on VR and is worth a full read. With the famous Oculus Rift being bought by Facebook and released this year with Xbox controllers, and the Playstation VR set to be on the market at a very affordable price in October, it seems like VR will soon be an ordinary part of our lives. Despite our tendency to discredit virtual reality, both my (now vegan) friend’s experience and the work of Metzinger and Madary point in the same direction—if anything, we’re to treat VR with more seriousness and caution than we would our normal reality, and by no means less.

Ana Sandoiu is a writer, researcher & philosophy lover living in Brighton, UK. She also writes on her personal blog, On a Saturday Morning.