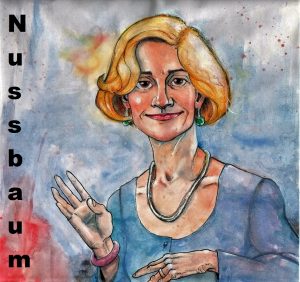 (2016). What role should we allow anger to play in our public life? Should systems of punishment be strictly impartial, or should they be retributive, i.e., expressive of public anger? Nussbaum thinks that anger necessarily involves the desire for payback, and that this is nearly always unhelpful. We should instead use anger (or rather, change it into "transition anger") to look toward the future and prevent future harm.

Whether in personal relationships, dealings with acquaintances, or in setting policy, anger as desire for payback tends only to further exacerbate bad situations. And "transactional forgiveness," i.e., debasing someone and making them jump through hoops before you accept an apology, is a historical relic that also just expresses hostility. But what about social justice—can anger help us focus on achieving that? Doesn't punishment need to express our collective anger against undesirable behaviors and those who perform them?

Martha is an engaging and provocative speaker, and Mark, Wes, and Dylan were happy to get to talk with her. After the interview, we three continued to talk to flesh out more parts of the book and elaborate our thoughts about what she had to say.

Wes thinks contra Martha (but with Aristotle) that ALL anger involves "down-ranking," but that this doesn't have to do just with your public status (what Martha is concerned with in describing some anger as involving this), but with any case where someone is disregarding something you care about, that you've identified as part of your circle of concern, i.e., part of yourself in a way.

Dylan, on the other hand, thinks that anger is better analyzed in the dynamic of the will to power, where you get mad because you're being thwarted in some way.

Mark brings up cases where we get mad at objects like your malfunctioning computer. Are those really just fringe cases where we're anthropomorphizing objects, or contra Martha, is it actually the case the anger does NOT necessarily involve an attribution of blame or desire for retribution?

Here's her Huffington Post article about sexual assault that she mentions.