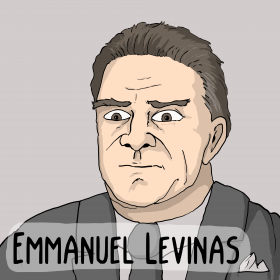 More Levinas, working this time through Time and the Other

What is it for a person to exist? What individuates one person from another, making us into selves instead of just part of the causal net of events? Why would someone possibly think that these are real, non-obvious questions that need to be addressed? Levinas gives us a phenomenological progression from the "there is," terrifyingly undifferentiated Being, to becoming an individual through "hypostasis," which is becoming an existent through a voyage out to the world and back to oneself. But this existing makes us solitary, not only in this weird ontological sense of being a distinct thing, but in a concrete, emotional sense. Overcoming this requires grasping the Other as a real Other, not as an object to fulfill our desires or get in our way. Really understanding this at our core takes some doing, and in the process, we gain a mature sense of time and of death, so, good for us!

This episode follows up on ep. 145, where we introduced some of these themes and gave Levinas's pitch for ethical responsibility.

End song: "Call on You" by Mark Lint from from the 1993 Mark Lint album Spanish Armada: Songs of Love and Related Neuroses. The song was written in 1987 when I was 16, so it's extra gooey!