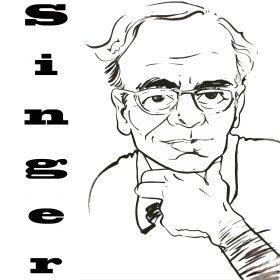 What do we owe the poor? Mark and Wes interview perhaps the world's most influential living philosopher for an hour, then the full PEL foursome discusses.

The focus is the newly reissued/repackaged 1971 essay "Famine, Affluence, and Morality," which argues that just as we would regard is as unethical to fail to save a drowning child because you don't want to ruin your expensive shoes, so it's unethical to let someone die of preventable illness or hunger when an expensive-shoe-level donation would save that life. The new publication includes supplementary essays, and Peter has spent much of the rest of his career elaborating and arguing for and preaching about the practical upshot of this essay, which is that our priorities in this consumerist society are very out of whack: We don't give nearly enough to charitable causes, and we don't judge our charitable giving by the standard of helping the most people in the most substantial ways.

Peter is well known as a utilitarian (we covered him briefly back in our ep. 9 where we discussed that ethical theory), and characterizes the key insight of the moral point of view as impartialism: no one individual's interests take precedence over anyone else's from the point of view of the universe. Don't play favorites. While there are certainly utilitarian advantages of everyone being responsible first and foremost for their own children, the lives of two stranger children will still outweigh the life of your single child, and certainly (and this is the conflict we actually face) fulfilling your child's taste for luxury is much less important than saving the lives of many stranger children.