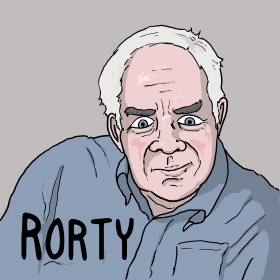 "The mind" seems to be an unavoidable part of our basic conceptual vocabulary, but Rorty thinks not, and he wants to use the history of philosophy as a kind of therapy to show that many of our seemingly insoluble problems like the relation between mind and body are a result of philosophical mistakes by Descartes, Locke, and Kant.

Our recent guest John Searle diagnosed the main mistake similarly: Instead of looking at knowledge as a matter of us being in direct contact with external things, Locke and his ilk erroneously thought that we can only ever know our own ideas. Rorty says this view of the mind as the thing closest to us, the only thing we can really know with certainty, came from Descartes, with only hints of it earlier in the tradition. Before that, people didn't think of the mind as an "inner realm" and mental elements like pains as particular things that don't seem to be of the same type as events in the physical world.

So the solution is not to deny that the mental exists like a behaviorist, or to insist that mental terms actually refer to brain states or that mental events and brain states are two aspects of the same underlying substance: Rather than bridge the "ontological gap" between mental and physical in this way, Rorty would rather we back up and reject the conceptual system that gives rise to this apparent problem in the first place.

Mark, Wes, and Dylan are joined by Stephen Metcalf of Slate's Culture Gabfest podcast, a former pupil of Rorty's. We plan to return to the book in ep. 155 to talk about Rorty's take on epistemology. If you're new to the philosophy of mind, we recommend you pick up our ep. 21, which gives a broad overview of the topic. I'd also recommend our ep. 55–56 on Wittgenstein, whose "private language" argument (and overall approach to philosophical problems as language games) is a key influence here.