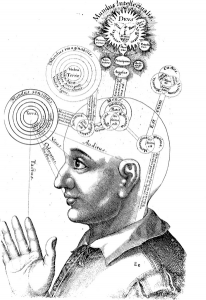 In 1998, philosophers Andy Clark and David Chalmers published what would become one of the most important papers in the contemporary philosophy of mind. They argued that the mind extends far beyond the boundaries of the skull and that our social and technological environments often play large roles in our everyday cognitive functions—so much so that:

To illustrate their point, Clark and Chalmers ask us to imagine two individuals, Otto and Inga, both of whom have been asked to meet a friend at the Museum of Modern Art. Inga recalls, having racked her brain, that the museum is on 53rd Street. She is confident in her belief and has no trouble making her way there. Otto, however, has Alzheimer’s disease, and must consult a notebook he keeps with him at all times (full of valuable information he has endorsed in the past, including the location of the museum), before he too can make his way to 53rd Street. In this example, the notebook can be said to play the same role for Otto that memory plays for Inga. The information in the notebook, argue Clark and Chalmers, “functions just like the information constituting an ordinary nonoccurrent belief—it just happens that this information lies beyond the skin."

In this hypothetical example, Otto relies on his notebook to such an extent that he and it constitute a coupled system that can be seen as a cognitive system in its own right. Fast-forward to the present: smart phones now fulfill a similar role for all of us. With us wherever we go, our smart phones store huge amounts of information—from our friends’ contact details to our memories, preserved as pictures—without which normal life would feel truly difficult. What’s more, we have constant access to the Internet—a repository of information and knowledge like no other. “Smart phones," argues Paul Smart of the University of Southampton, “now undoubtedly serve as part of the mechanistic substrate that realize human mental states and processes.”

If the Internet is "part of the basic package of cognitive resources we bring to bear on the everyday world," the websites we spend the most time on must be playing a proportionally large role in our everyday cognitive functions. According to one study, we spend almost 30 percent of our time online on Facebook and other social media platforms. But is our reliance on Facebook in any way comparable to Otto’s reliance on his notebook?

Not all of this information, though, is accurate.

Otto trusted the contents of his notebook because it was he who had included it at some point in the past. His occurrent belief that the gallery is on 53rd Street is justified because that information corresponds with reality. If it did not, he would not have written it down. Our mistake is placing a similar degree of trust in what we see on Facebook, which, although indicative of someone’s activities and beliefs, tends to only show half the picture.

It’s impossible, for example, to appreciate the ins and outs of someone’s political beliefs based on a single status they shared the morning after Brexit, but we feel as though we’re able to nonetheless, pigeonholing people off the back of scraps of evidence as a result. Neither can you gauge someone’s mental well-being from a photo in which they appear to be having a good time. When snapshots are taken to be entirely representative of the whole and we begin to think of people not as real, nuanced human beings but in terms of their online activity, our beliefs about those people will shift and change accordingly.

This can have serious ramifications. “Social media allows us to precisely quantify our social standing and to see that other people have more friends and followers than we do,” argues George Monbiot of the Guardian. When you’re constantly comparing your own imperfect life with the highly edited, Facebook-ready digital lives of your peers, it’s hardly surprising that many of us end up jealous or depressed. "When the Net absorbs a medium,” The Atlantic’s Nicholas Carr has written, “that medium is re-created in the Net's image,” and not always for the best.

Each major technological change brings with it a different psychology. Over 2,000 years ago Socrates worried that the advent of the written word would distort memory, rendering us “the hearers of many things but [able to] learn nothing … to have the show of wisdom without the reality.” His concerns proved to be unfounded, but the cognitive effects of social media, still a relatively young technology, are only now being felt.

A major survey into the health and well-being of young people published last month revealed that one in three teenage girls (who spend up to three hours a day on social media according to one CNN poll) suffers from depression or anxiety. Thirty-seven percent of respondents said they felt unhappy, worthless or unable to concentrate, up from 33 percent in 2005, the same year that Facebook launched. The UK Department for Education, which commissioned the report, cited the increased use of social media among the young as one of the possible causes for this alarming rise.

Properly acknowledging the status social media has within our cognitive systems and its propensity to influence our desires and beliefs could help medical professionals provide more informed advice for those suffering from their overuse of Facebook and other such sites.

“The extended mind,” argued Clark and Chalmers, “implies an extended self.” Once social media has become an integral part of your mental apparatus—a part of you—being told to spend less time online to escape the side effects is unhelpful advice. We’re all familiar with that feeling of mental incapacity—of isolation—that accompanies a prolonged break from Facebook; without it, we feel just as lost as Otto would deprived of his notebook.

The cognitive impacts of social media have been largely overlooked in part because much of the related research has focused on the effects it is having on cultural and political processes. But even these are still only beginning to be understood.

In the wake of Donald Trump’s election victory, Facebook was criticized for contributing to "filter bubbles" in which groups of like-minded people shared only news that they already agreed with, isolating themselves from any information that might challenge their preexisting beliefs.

Facebook algorithms show us what it thinks we would like to see but not perhaps what we need to see in order to have a balanced view of the big issues. What we’re left with is an Internet that acts more like a mirror, reflecting back our preferences and prejudices, than a window into the wider world.

It is under precisely these conditions that an external resource can be said to constitute part of the extended mind. Technology is at its best when it is barely noticeable, and so it is in Facebook’s interests to provide us with news that is "automatically endorsed, not subject to critical scrutiny and deemed as trustworthy as something retrieved from biological memory."

But the more bound up in ourselves we become, the harder it is to have any kind of dialogue with people of opposing views. The disconnect between normal people and "the elite" that played such a heavy role in Donald Trump’s victory and the Brexit vote is so palpable, argues Janan Ganesh, of The Financial Times, that there is now "an almost anthropological interest among journalists and politicians" in the people who eschewed their advice and chose to plunge headfirst into the unknown.

The incorporation of an external resource into our extended minds need not necessarily improve cognitive capabilities. In fact, the further your mind extends, the more vulnerable it becomes to the bias and other shortcomings of whatever resource (be it Facebook or anything else) constitutes "part of the material supervenience base for some of your beliefs and mental processes."

Six in ten of us now get our news from Facebook, yet we’re only just waking up to the impact its algorithms and filter bubbles are having on the political process. Attempts to improve the sites’ usability or "streamline our experience" will further blur the boundary between biology and technology, enhancing the influence Facebook has on our cognitive processes while necessarily obstructing our ability to recognize the unfolding of this very process.

“Facebook algorithms must have encoded in them a sense of public life, a sense of civic responsibility” argues Eli Pariser, founder of Upworthy. Until they do, our extended minds will continue to guide us in directions we may not like.

George Steer studied philosophy at the University of Bristol, and now freelances when he isn't gardening.