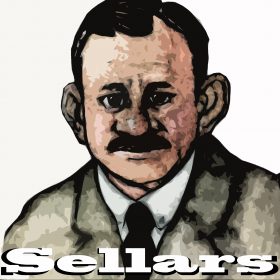 Is knowledge based on a "foundation," as Descartes, Locke, et al. thought? Sellars says no. Sixteenth-century empiricists thought that we have some indubitable perceptions: Even though I may not be absolutely sure that there's a red object in front of me, I can be sure that there seems to be such an object. The "red appearance" seems to be something I'm directly acquainted with, and maybe if I compare such experiences, I can come up with generalizations, and so eventually get to empirical science.

But what is it exactly that I'm aware of in such a case? If this kind of experience is really basic, really supposed to provide the basis of the rest of knowledge, then knowing it can't involve also knowing those other things, on pain of circularity. So what I'm aware of can't be the truth of a sentence, which would require that I have a lot of prior knowledge of language and of the logical space in which "red" sits relative to other colors, other adjectives, space and time, etc. So it must be a wordless kind of thing, much like a (non-color-blind) animal would have, or a baby.

That's the crux of Sellars's argument: Knowledge can't be foundationalist in this way at all. There are no basic, indubitable propositions that provide support for everything else. Instead, these propositions must come in packs: Just becoming linguistically competent means we've already accepted numerous claims, and though, yes, observation sentences provide support for generalizations, the generalizations (in a different way) provide us the ability to have individual, new experiences.

And note that while the argument was cast against empiricism, it works even more quickly against rationalism, i.e., the claim that there are basic truths of reason that ground everything else. Any "truth of reason," again, is obviously a proposition, a sentence, and to be even understood involves buying into a whole conceptual scheme. Even something as innocent as "A=A" means that you understand what identity is, as it occurs in real-world objects, and yet we understand that even if "red ball" and "red ball" both refer to the same object, we know that "red" does not equal "ball," so we understand predication, and language use, and the social system in which language use occurs.

Mark, Wes, and Dylan are joined by Lawrence "Dusty" Dallman, who claims that Sellars is the most important 20th-century American philosopher. So come discover with us this relatively under-read, fairly difficult gem of a thinker!

This was initiated due to Rorty's reliance on Sellars in the part of Philosophy and the Mirror of Nature that we'll be reading for ep. 155, but you may wish to listen to ep. 153 where we started Rorty before this. You may also wish to refresh on the epistemology that Sellars is reacting to, with our episodes 20 on Kant and 17 on Hume. Other newish takes on Kantianism that come up in the discussion are those by Kuhn and Peirce.

Buy the book (I recommend this version: Knowledge, Mind, and the Given : Reading Wilfrid Sellars's "Empiricism and the Philosophy of Mind," Including the Complete Text of Sellars's Essay

) or read the essay online.