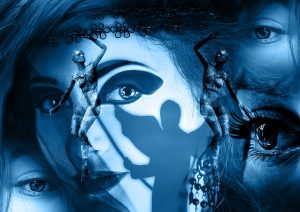 On an episode of Inside Amy Schumer last year there was a sketch called “Listen Alert.” The gist was that Listen Alert was an emergency service for people who feel the need to vent and aren’t receiving proper attention from their friends or significant others. Press the button on the Listen Alert necklace and vent away. But toward the end of the sketch one woman starts to describe a dream, and Schumer quickly interjects as a Listen Alert employee puts her hand over the woman’s mouth. “We will not listen to your dreams,” Schumer says. “We are not saints.”

There is something offensive about being subjected to someone else’s dream. Unless I am prominently involved, the vague description, senseless logic, and grasping, threadbare narrative are a form of verbal white noise—audible but strangely devoid of substance. And yet, for reasons that I can’t quite fathom, dream sequences continue to feature prominently in books, movies, and television.

Having your own dreams is a pretty cool feature of the sleeping brain, and potentially a crucial one. But no dream should ever be a crucial feature of a narrative. As Henry James famously advised, ”Tell a dream, lose a reader.” Many essays have explained why this is so from a literary perspective: dreams can be unreliable and confusing; dreams are a lazy way of conveying meaning; dreams often function solely as audacious displays of artistic flair. But I suspect there is a deeper issue with dream sequences—one that is rooted in how people process and understand experiences. I suspect that dream sequences are not just aesthetically off-putting but fundamentally so; that they are antithetical to the project of storytelling itself.

It is easy to see why understanding stories can be evolutionarily advantageous. An inability to accept stories would not only make one a horrible movie companion, but would be potentially debilitating. As Cody Delistraty points out in The Atlantic, in a piece on the psychological comforts of storytelling, “Stories can be a way for humans to feel that we have control over the world. They allow people to see patterns where there is chaos, meaning where there is randomness. Humans are inclined to see narratives where there are none because it can afford meaning to our lives—a form of existential problem-solving.”

In addition to helping us make sense of our world, stories also allow us to make sense of one another. A 2012 study by Dan Johnson, a researcher at Washington and Lee University, concluded that reading fiction increases empathy toward others. Other researchers have found that our brains are hardwired to understand stories. The cognitive scientist Veronique Boulenger has shown that both the language and the experiential parts of the brain light up when hearing a story, as if the events are actually happening to you. As Annie Murphy Paul concludes in an article for the New York Times that cites the above study, “Reading great literature, it has long been averred, enlarges and improves us as human beings. Brain science shows this claim is truer than we imagined.”

But it's hard to see how it could be similarly advantageous to better understand the dreams of others. The brain may light up when listening to a story, but listening to a dream is often described as “mind-numbing.” I don’t think this phenomenon has been studied, but I would speculate that the brain is not active in the same way when encountering someone else’s dream. Perhaps this is because we are all too aware when being subjected to a dream that it lacks the dramatic or instructive intention of a fully realized story. This doesn’t imply that dreams are meaningless, but that their power as a narrative form might be.

This premise becomes clearer when we consider the logical structure of stories. In The Art of Fiction, John Gardner writes, “The most important single notion in the theory of fiction I have outlined—essentially the traditional theory of our civilization’s literature—is that of the vivid and continuous fictional dream.” In order for one to believe a story, one must buy in: one must experience the narrative with the same lucidity one experiences a dream. Any deviations from the logical structure of a fictional world will only serve to undermine its reality. If I were to write a political thriller only to have it literally rain cats and dogs, this outlying feature would make it uncomfortably obvious to the reader that the story was but a story. However if my story were a work of magical realism, about a Labrador that has no friends until he does a rain dance and it suddenly starts raining cats and dogs, the logic of my world remains intact even if the events are illogical.

On the contrary, one’s own reality is experienced through direct sensory perception. Unless I’m on heavy drugs, or suffering a mental breakdown, I’m convinced that my experience is a reasonably accurate representation of the world around me. I experience, therefore I am. In fiction, or fictional worlds, one needs to be similarly convinced that the author is providing an accurate representation of the world they’ve created. There is an implicit understanding that the events being portrayed did not occur, but if the portrayal is done well enough, that understanding need not be acknowledged.

Thus, fiction is a suspension of disbelief. There was no friendless Labrador that actually caused cats and dogs to precipitate from the sky. The power of the story does not hinge on its veracity, it hinges on the dramatic impact created by the vivid and continuous fictional dream. This is where dream sequences fail us—they propagate chaos and randomness where we expect to see order. A fictional world is reality once removed—an acceptable fabrication reliant upon the perceived reliability of its author. A dream sequence, however, is something stranger: it requires a double suspension of disbelief—reality twice removed. A character experiencing a dream sequence is a fictional subject weaving a fictional story, a hallucination taking place within a mirage. There is no need for a character's dream to adhere to the logical structure of the fictional world the character inhabits. The falsity of the dream, rather than enhancing the fabrication, thereby exposes it, as the story becomes a teetering house of cards. As soon as the Labrador with no friends starts dreaming, the author is asking me to buy in twice, and the “vivid and continuous fictional dream” I’ve been immersed in is suddenly interrupted by the mental leap required to sustain the dream at a secondary narrative level. There is taxation without representation: I’m required to further inflate the fictional balloon without the balloon actually expanding.

Of course, there have been plenty of exceptions to the “Tell a dream, lose a reader” dictum; dream sequences that added to the enjoyment of a narrative and didn’t “awaken” the audience to its status as fiction (the Dude’s galactic bowling trip in The Big Lebowski comes to mind). But I would posit that these sequences were successful in and of themselves; that they were self-contained mini-narratives. A story can exist within a story. But a dream within a story is narrative gibberish.

And yet dreams still proliferate in pop culture. On a recent episode of Transparent, the popular TV series on Amazon, a character went to the dentist, and the ensuing nitrous-induced dream sequence had me checking football scores on my phone. After all, I’m no saint. I will not listen to your dreams.

Alex Tzelnic is a writer and teacher living in Cambridge, MA. He has resolved to tweet more in 2017, and you can follow his progress @atz840.