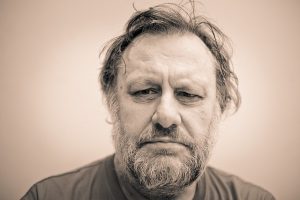 I’ve been wanting to interview the famous Slovenian philosopher for the last seven years and now I finally have.

I discovered Slavoj Žižek’s work quite by accident when, wanting to check out Loren Singer’s novel The Parallax View from my local library I put Žižek’s book with the same title on hold instead. Looking back on this incident now, after having finally gotten the chance to talk to him directly, the mistake seems like an act of fate. It seems like fate precisely because seeing it as an act of fate fits well within Žižek’s philosophical system. For Žižek, fate is something chosen retrospectively and retroactively. That is, our life is full of random accidents, stuff goes wrong this way and that way, but at certain moments we can stop, think it over, and say to ourselves “Ah ha, that one time when I read Žižek’s book by accident, that was fate.” Or, to use a different example, Žižek agrees with Jorge Luis Borges’ essay “Kafka and His Precursors.”

Borges said that it is only possible to discover the true antecedents of Kafka, to find the common themes and techniques in various earlier works, the themes and techniques that Kafka adopted and adapted into his own projects, if we first know Kafka. That is, Kafka created his precursors through his own work. It is only after Kafka that Kierkegaard, Zeno, Browning, and others can be found to relate to each other at all.

The fact is that every writer creates his own precursors. His work modifies our conception of the past, as it will modify the future. –Borges

In any case, I’d been wanting to interview Slavoj for years, I was even fated to do so, but for a long time I was turned down, either by his publicist or directly by the philosopher himself. Even when I could offer him some money in the form of future royalties from a small-press book that could be published based on the interview, the answer was still no.

And then, about six months ago, Slavoj Žižek’s stock started plummeting.

The philosopher has always faced charges of sexism and of Eurocentrism from a certain type of liberal critic, but during the months leading up our fateful encounter the criticism and attacks have been intensifying.

In April of 2016 he was on Channel 4 to discuss the refugee crisis and he argued that the crisis shouldn’t be understood merely as the tragic consequence of Western intervention, but also as the consequence of an active fundamentalist political project in Syria. This turned out to be too much for many to bear and in May, at the Left Forum, Žižek faced an organized band of protesters who insisted that the Forum had made a mistake when they invited a racist like Žižek to the conference.

But Žižek didn’t stop there. His next scandal was born of the US debate around transgenderism and bathrooms. Žižek published an essay in the LA Review of Books wherein he wrote,

…we can safely predict that new anti-discriminatory demands will emerge: why not marriages among multiple persons? What justifies the limitation to the binary form of marriage? Why not even marriage with animals? After all we already know about the finesse of animal emotions. Is to exclude marriage with an animal not a clear case of 'speciesism,’ an unjust privileging of the human species?

Lifted out of context this reads like the ranting of a pure homophobe, but Žižek fanboys like me know to only read his provocative prose in context. If you read the whole essay it really is clear that Žižek is aware of the absurdity of equating homosexuality with bestiality. What he was really arguing with was a certain utopian postmodern ideology that seeks to eliminate all limits, to eliminate all binaries, to go beyond norms because the imposition of a limit is patriarchal and oppressive. For Žižek, today’s gender politics is false and utopian or, as he would put it, pulled from the trashcan of ideology and so on.

It was not the case that Žižek opposed the struggle of LGBTQ people, but only that he opposed what he saw as a phony liberal ideology that set up the terms of the LGBTQ struggle.

Could Žižek really have been only pretending to be some sort of radical leftist all along?

Some of us could accept this even as we saw that he’d waded into a terrain that was full of landmines and that he’d done so in a self-destructive way. After all, Žižek is a provocateur. We knew that already, and even as Žižek was falling out of favor with many, there were also many who carried on defending him.

Then, in November of last year, once again on Channel 4, Žižek was asked who he would vote for in the upcoming election if he could vote in America. Žižek answered quickly with one word:

And with this answer I realized two things. First, this answer meant I could probably get Žižek to come onto my podcast, and second, I was no longer sure that I wanted Žižek on my podcast. After all, was it worth the risk to my own small reputation and the reputation of the small press I worked for?

I decide that yes, it was worth the risk. The question I needed to ask him, the reason the interview was worth having, was basically this one:

Could Žižek really have been only pretending to be some sort of radical leftist all along? Was his endorsement of Trump to be taken at face value, or was there, yet again, some more subtle point he was making? When he went on Al Jazeera to face off against Mehdi Hasan, Žižek said that he didn’t like Trump, but only thought that Clinton would maintain the status quo while Trump, by being really bad, would “shake up the system and reorganize the coordinates of our politics.”

I wanted to know if he had a better answer than that. I wanted to see if he had a deeper insight into the moment and if his call was something more than a rephrasing of the cliché “Things have to get worse before they can get better.”

I sent out a standard invitation form letter to Slavoj and, as I predicted, he accepted. We set up a time to talk.

What you’ll find if you listen to the interview is that the “Elvis of cultural theory” is mega-polite and very likable. He is precisely the same as you’d expect him to be, in fact. He is not racist (as far as I can tell), not transphobic, and not really a Trump supporter.

But he is a man without a fate I think. As old as he is, it seems to me that Žižek, like everyone else on the left, is reeling. More than that, he is still waiting for something to happen, something that will, when it arrives, force him to say. “Ah ha, that one time when I made those LGBTQ people mad and endorsed Trump, that was fate. Of course! It was meant to go that way all along.”

He is still waiting for Kafka. Perhaps we all are.