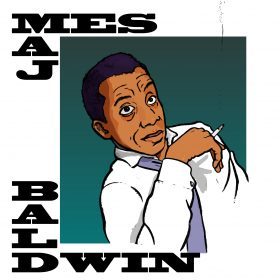 Baldwin is a go-to figure at this point in discussions of race; his essays, stories, and speeches provide a key touchstone in discussing how racism has warped our culture. So, how do we translate his testimony into philosophical theory? When he talks about the psychological/sociological maladies of both black and white folks resulting from the overt racism of his day, to what extent do his insights apply to us now, when racism has become more subtle?

The full foursome are rejoined by Lawrence Ware to shed new light on our discussion from ep. 161. We focus on Baldwin's middle way between MLK's love and Malcolm X's rage and his critique of the American dream. How do you oppose the inhumanity of others without demonizing them, and thereby becoming inhuman yourself?

Buy the book version of I Am Not Your Negro

that includes the rest of our readings. You can also read the essays online: "Notes of a Native Son," and the two essays that make up The Fire Next Time, the shorter “My Dungeon Shook — Letter to my Nephew on the One Hundredth Anniversary of Emancipation" and the more lengthy "Down at the Cross — Letter from a Region of My Mind."

You can watch several interviews used in the film or referred to on the episode: This 1963 one with Kenneth Clark is key; the clip is bookmarked at the claim from the film that white people created this despised other category; to fix America, we have to figure out what psychological need drove that creation. The short clip actually used in this episode from a Dick Cavett interview is here and another key point in that interview is here. The 1984 interview Mark refers to where Baldwin reflects on the lack of real progress in addressing the results of racism is here, bookmarked at at the point Mark paraphrased about the the increasing "economic uselessness" of blacks according to establishment.