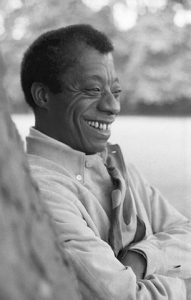 On two short stories by James Baldwin: “This Morning, This Evening, So Soon” and “Sonny’s Blues.” Both are included in the collection Going to meet the Man (1965). Unfortunately, Daniel had to be absent this time, but we did get Mark Linsenmayer to join us!

We highly recommend Baldwin's famous debate with William F. Buckley.
If you have thoughts, recommendations, or questions that you want to send our way, please do via phificpodcast@gmail.com.
Hear more Phi FIc.
Thanks to Chrisopher Nolen for our music.
Special thanks to Mark Linsenmayer for being our guest this month! And if you haven't already done so, check out the PEL's James Baldwin on Race in America episodes.
Photo by Allan Warren, 1969