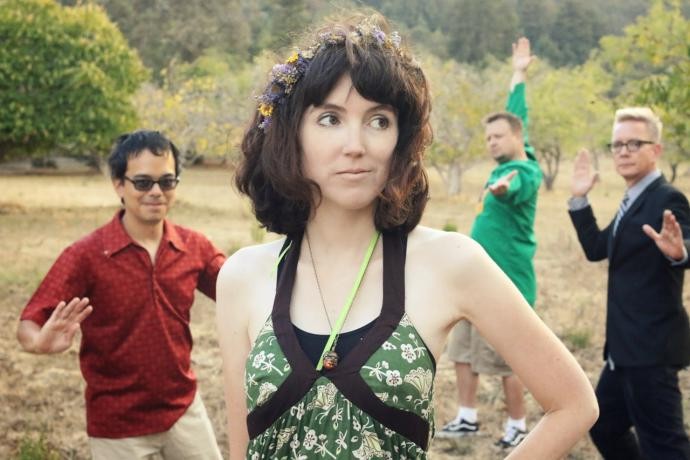 Karla has put out four albums since 2006 with the Corner Laughers, a Bay Area band that has been categorized as "twee" given Karla's ukulele, sparkly Brit-pop ornamentation, and similarly colorful lyrics.

We discuss "Queen of the Meadow" from Matilda Effect

(2015), the Nov. 2016 charity single "Don't Hush, Darling" (which gives us the title of this post; it's a message to girls to not settle for less-than), and a psychedelic whirl called "Grasshopper Clock" from Poppy Seeds

(2012). We also listen to "Fairytale Tourist" from Matilda Effect, and the opening/closing music is from that album's "Midsommar." Learn more at cornerlaughers.com.

Here are videos for "Fairytale Tourist," another song from Matilda Effect called "Octavia A," a cover of "Our House" (originally by Madness), and another song from Poppy Seeds called "8:18"featuring vocals by bassist Khoi Huynh. The producer for the songs we listen to here was Allen Clapp of The Orange Peels.