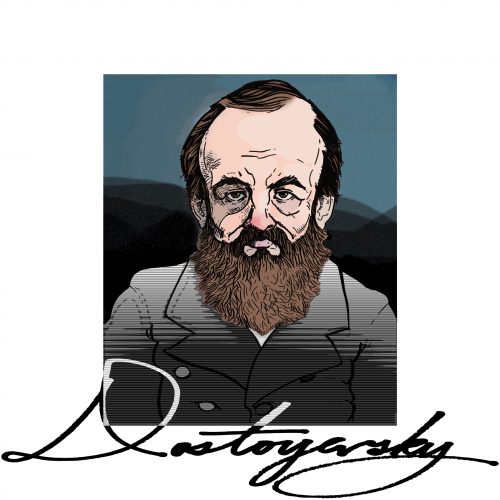 On Fyodor Dostoyevsky's philosophical novel from 1869.

Could a morally perfect person survive in the modern world? Is all this "modernity," which so efficiently computes our desires and provides mechanisms to fulfill them, actually suited to achieve human flourishing? Dostoyevsky (whose name, incidentally, can correctly be spelled with either one "y" or two... the translation from the Russian alphabet means that that there's no standard spelling for any of his characters either) says no on both counts. Typical Russian existentialist!

So, in the line of D's great string of philosophical novels, The Idiot comes after Crime and Punishment (1866) (and his great appetizer-novella Notes from Underground, 1864) but before The Brothers Karamazov (1880), and its philosophical purpose is largely to raise questions that it does not answer. In the novel's "hero" Myshkin, D. intended to present a morally perfect human being, but Myshkin's open-heartedness leads to disaster for both him (nothing unexpected in that, given his status as Christ figure) and those around him: People are not psychologically constituted to handle true goodness. We are a paradox, because (contra Plato) our freedom often necessitates that we turn away from "the good" that is set before us. This explains a lot of self-destructive behavior, and it means that utilitarian attempts to calculate what makes us happy and institute that as social policy will inevitably fail.

Mark, Wes, and Dylan are joined by Corey Mohler, author of Existential Comics and artist for our 2017 wall calendar (only a few copies left!). We talk through the various characters (lest you get lost just as readers of D. often do, here's a reference list) and D's implicit and explicit claims about psychology, ethics, religion, and how our inevitable death affects all of us. D's concern is that society and modernity have undermined the machinery of our motivations, which is supposed to work through the naturalness of human contact, which D. thinks that traditional, peasant-based Russian Christianity facilitated (as opposed to Catholicism, which he declaims as a political enterprise). Modern culture directs us to pursue social status and money, which is so obviously empty that it then tends to push us toward nihilism, which is D's great fear: Without a firm foundation for values, we do things out of spite, or for no reason, and can rationalize even terrible crimes as being understandable given the criminal's economic or social situation.

Of course, as a novelist, Dostoyevsky can create these very different characters with different philosophies, and it's never altogether clear when we're hearing D's actual view as opposed to one he's just playing out the implications of. Like Nietzsche, he certainly had a dim view of ordinariness, and saw the values as exhibited through status assignments in his society as pretty screwed up. But he doesn't start as Nietzsche does with atheism, nor does he address existentialism from a vantage that only makes sense for the religious à la Kierkegaard. We can all relate to the desire to cut through all the bullshit and react lovingly and authentically to people, and we all face the looming specter of death and how that potentially makes all of our projects meaningless.

Get a Dostoyevsky T-Shirt!