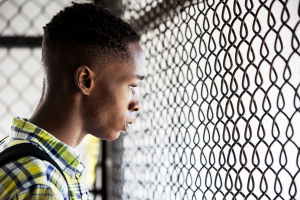 In a radio interview with the BBC, Moonlight director Barry Jenkins attributed the movie’s overwhelmingly positive reception to the fact that it showed filmgoers something new. Crediting cowriter Tarell Alvin McCraney, whose play In Moonlight Black Boys Look Blue inspired the film, Jenkins observes, “I’ve never seen a black man cradle a black boy in any film I’ve ever seen […] I think that when you have this lack of images, and then they suddenly appear, sometimes it can you strike down […] in a good way.”

This commitment to “striking down” viewers doesn’t just influence the film’s structure: it’s the central theme. At the end of the aforementioned scene, in which the adult Juan (Mahershala Ali) teaches protagonist Chiron (played as a boy by Alex Hibbert) how to swim, the older man offers the following advice: “At some point, you gotta decide for yourself who you're going to be. Can't let nobody make that decision for you.” Most of the movie features Chiron doing exactly that, trying to define himself according to his own terms but ultimately failing, because he does not recognize himself in the images presented to him. He cannot see himself as a character in the stories he’s been told.

Some observers have described Chiron’s process of deciding for himself in Romantic terms, as if there was a “real Chiron” struggling to manifest. But the very fact that he takes the entire film to realize his chosen identity illustrates the importance of social roles in identity formation.

Few philosophers have so plainly articulated this process better than Kwame Anthony Appiah, whose 2005 book The Ethics of Identity tries to recover a more social, situated form of individuality. Running through his book is this notion of “the social scriptorium,” the collective identities or social assumptions that “provide loose norms or models […] narratives that people can use in shaping their projects and in telling their life stories” (22). These include not only the basic modes of behavior in a given context, such as what society expects of a writer or a teacher, but also the “rites of passage” that indicate the major points of development for such a person (e.g., publication, getting tenure, etc.).

Moonlight repeatedly draws attention to these scripts, as characters navigate their lives by acting out the identities they choose. Perhaps unsurprisingly, the film’s high school scenes best demonstrate this principle at work: Chiron’s best friend and love interest Kevin (Jharrel Jerome) demonstrates his masculinity with an over-the-top sex story, bully Terrel (Patrick Decile) belittles Chiron (played here by Ashton Sanders) by describing him in feminine terms, and a sympathetic case worker tries to earn trust by retelling Chiron’s story in her own words.

One of the most instructive scenes occurs in a conversation in which Terrel coerces Kevin to attack Chiron. Throughout the conversation, Terrel invokes a series of scripts, beginning with references to middle school lunches the two boys shared. After establishing commonality, Terrel reminds Kevin of “Knocked Down, Stay Down,” a violent game they played with the other boys, and appeals to Kevin’s flattery by praising him for a beating up a certain classmate: “Kevin, you fucked that kid’s face up, man. We was calling you Tyson after that shit.” When Terrel declares “But niggas don’t do that no more,” the social script becomes clear: those who perform the violent acts that Terrel enjoys gain acceptance into a group exempt from the punishment of Terrel’s bullying.

So when Terrel asks, “If I point a nigga out you gon' knock his ass down?” he offers Kevin a role in the script, and simultaneously infers a punishment should he refuse.


The existence of the labels help individuals imagine themselves within a particular identity, gives them a set of behaviors associated with that identity, and provides guidance for others to respond to that identity.

Jenkins lets the camera to linger on Kevin at the end of that exchange and in the moments before he punches Chiron, allowing audiences to see his indecision. This ambivalence illustrates the distinction Appiah makes between identity, the scripts and social roles available to a given individual, and identification, “the processes through which individuals shape their projects—including their plans for their own lives and their conceptions of the good life—by reference to labels, available identities” (66). This process involves three aspects: the “availability of terms in public discourse,” followed by the “internalization of those labels as parts of individual identities,” and finally, the patterns of behavior toward those labels, guiding normative treatment of those who are thusly labeled (66, 68). The existence of the labels help individuals imagine themselves within a particular identity, gives them a set of behaviors associated with that identity, and provides guidance for others to respond to that identity.

Appiah rightly notes the complexities of these two functions in terms particularly appropriate to both Chiron and Kevin. A gay man, Appiah explains, acts in according to desires he has not chosen, but can still “choose whether or not to okay a certain conventional role” and can “choose whether to adopt the identity” (69–70). Chiron unquestionably has homosexual desires, even before he knows what to do with them, but the scripts available to him involve elements he does not want to identify with—namely, the bullying he receives from other boys, who already see that he is different or “soft.” In one of the film’s most powerful scenes, the young Chiron asks Juan, “What is a faggot?” and “Am I a faggot?” Juan’s sensitive answer underscores the distance between the person and the social role, defining the slur not as a way of being, but as “a word used to make gay people feel bad.” The fact that Chiron potentially identifies with a label he does not understand underscores the degree to which it is not his. He may have feelings for other boys, but he does not see himself as a “faggot,” despite what others tell him.

Much of the power in Juan’s response stems from the fact that it contrasts so starkly to the way others describe Chiron’s sexuality. The social script that understands homosexuality as something weak or aberrant prompts Terrel to use it as an excuse to terrorize Chiron, convinces Kevin to hide his own attraction to his friend, and even leaves Chiron’s mother Paula (Naomi Harris) befuddled on how to raise him. When she angrily asks Juan, “You gon' tell him why the other boys kick his ass all the time?” she expresses frustration that her son’s behavior contradicts the scripts available to her. She recognizes Chiron as her son and suspects that he may be homosexual, but both of those identities come with markers that she cannot reconcile, resulting in repeated failures and rejections that serve a function similar to the beatings Chiron receives from Kevin, Terell, and other boys: punishments for failing to identify with the script put forth by him.

So when we meet the adult Chiron (Trevante Rhodes) in the film’s final third section, and find him to be a muscular, gun-toting drug dealer who calls himself “Black,” we are meant to understand that he has resolved his indecision. Bereft of a script with which he can identify, Chiron follows the one most obviously available to young black men in economically destroyed parts of the inner city. He does so in a manner that recalls his biggest influences—the gold crown on the dashboard of his car recalls Juan (himself a drug dealer, sometimes threatening)—but his half-hearted attempts to engage in heterosexual banter with another man, or his refusal to punish that same man for erring with his drug money, indicate that the division remains: Chiron refuses to fully identify with the identity put before him.

While Appiah often describes social scripts as something received, prewritten and then altered as an individual takes them on, Moonlight vividly dramatizes the possibilities of revision. After receiving a phone call apology from Kevin (played as an adult by André Holland), Chiron impulsively drives from Atlanta to Miami to visit his friend’s restaurant. After a night of catching up, the two men end up in Kevin’s apartment, where the following exchange occurs, which interrogates Chiron’s identity performance:

Kevin here does recognize the scripts at work and, like Paula, cannot reconcile the two: the adult Chiron is hardly recognizable as the young man Kevin knew as a youth. But by framing it as a question instead of an accusation, Kevin gives Chiron space to respond, to tell his own story. And that’s exactly what Chiron does; when he haltingly declares, “You’re the only man who’s ever touched me,” Chiron reveals not only his inability to identify with the role available to him, but his body language asks Kevin to help him write a new one.

This desire to write a new identity recalls Appiah’s correlation between storytelling and autonomy. The process of identification, he writes, “typically has a strong narrative dimension, through which one tries to fit a life story into certain patterns—a student of literature would call them tropes—and into larger, cosmic or social stories (about one’s significance to a nation, or a higher power)” (68). As this observation, and the whole “script” metaphor suggests, creating one’s identity is a form of storytelling, and Moonlight very much functions as a new script, written in defiance of those already in place.

Joseph George is a lecturer in the English Department at the University of North Carolina at Greensboro. He is the author of Postmodern Suburban Spaces: Philosophy, Ethics, and Community in Post-War American Fiction, and his writing is collected at joewriteswords.com.