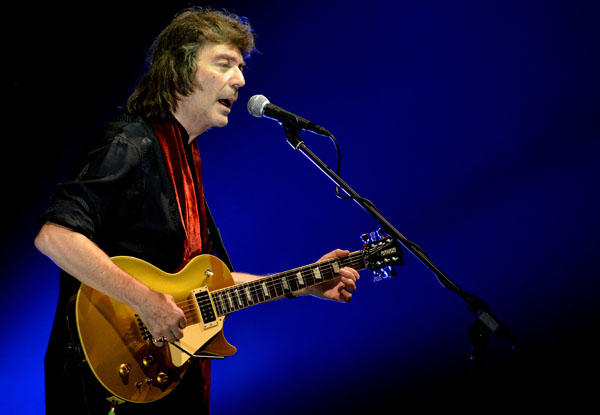 Steve released six studio albums with Genesis between 1971 and 1977 and twenty-five solo albums that feature his virtuosic guitar (he invented tapping!) and much of the spirit of '70s prog rock. He now works with producer/keyboardist Roger King to create dense, cinematic soundscapes.

We discuss "In the Skeleton Gallery" from The Night Siren

(2014), and "Omega Metallicus" from Darktown (1999). End song: "Anything but Love" from The Night Siren. Opening/closing music: Steve's solo from "Firth of Fifth" from Genesis's Selling England by the Pound (1973). For more information, see hackettsongs.com.

Here's a video of "Behind the Smoke," also from the new album, and here's a video for Love Song to a Vampire. If you haven't heard his albums, start with his first: 1975's Voyage of the Acolyte. In 2012 he recorded a whole album as Squackett

with Chris Squire that you might enjoy. I also recommend his classical work, especially the 1998 album Momentum.

There's a lot of live Steve available (do a search on Amazon Prime!); here's a televised show of his classic material from 1978 (with his brother John on flute). Here's a whole concert with Steve's band playing old Genesis songs. Here's Steve playing "In the Court of the Crimson King" with its composer Ian McDonald and John Wetton.

For much more Steve talking, check out this series "The Man, The Music," which includes him showing you the whole "Firth of Fifth" solo. Here's another good, recent interview.