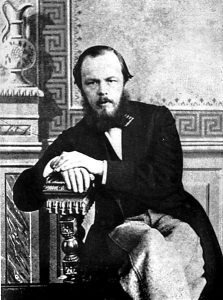 Our reading this month is The House of the Dead by Fyodor Dostoevsky, a semi-autobiographical novel about life in a Siberian labor camp. Dostoevsky was sent there after being convicted for his connection with the Petrashevsky Circle, where Western philosophy and literature were discussed, which was deemed subversive by Tsar Nicholas I.

Told through the eyes of Aleksander Petrovich Goryanchikov, convicted of murdering his wife, Dostoevsky paints the world of the camp through the prisoners. He pulls us into the horror the inmates suffer within their souls:

No man lives, or can live, without having some object in view, and without making efforts to attain that object. But when there is no such object and hope is entirely fled, anguish often turns a man into a monster. The object we all had in view was liberty, the remission of our confinement and hard labor. —The House of the Dead

We discuss this fascinating "early prison literature," and explore (i.e., veer off into) the role of crime and moral breakdown in society. Mary expresses concern about the loss of hope, and Laura about the inescapable human condition. Daniel admires Dostoevsky’s psychological sense, and Nathan notes that the prisoners are “broken in time by the larger swarm of the State.” And poignantly, Cezary finds Dostoevsky's words hold hints of Nietzsche, with our laws having buckets of blood behind them.

Reality is a thing of infinite diversity, and defies the most ingenious deductions and definitions of abstract thought, nay, abhors the clear and precise classifications in which we so delight. Reality tends to infinite subdivision of things, and truth is a matter of infinite shadings and differentiations. —The House of the Dead

This is one of our earlier discussions, so there are a few sound issues. Many thanks to Tyler Hislop and Laura for their editing magic!

You are welcome to contact us at phificpodcast@gmail.com with any recommendations, thoughts, or what have you. Thanks to Christopher Nolen for our music.