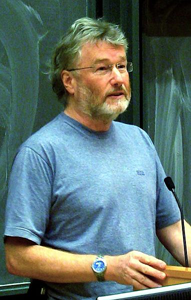 This time, we talk about a novella in the late, great Iain M. Banks’s famed Culture sci-fi series, which is centered around a utopian, post-scarcity society that spans various planets (and other habitats) within the Milky Way galaxy.

They have hope. The Culture has statistics.

So says Linter, one of the chief protagonists in The State of the Art. In the story, a group of Culture members—mostly humanoids—venture to Earth to study its inhabitants and decide whether to induct them into the fold. A crisis occurs when one of the group—Linter, who has spent a considerable amount of time on-planet—wants to “go native” rather than return to the ship and his life in the Culture.

We’re the ones who’re different, we’re the self-mutilated, the self-mutated. This is the mainstream; we’re just like very smart kids; infants with a brilliant construction kit. They’re real because they live the way they have to. We aren’t because we live the way we want to.

Linter’s shipmate and friend, Diziet Sma, gives her best arguments to try to urge Linter to return, highlighting Banks’s fascinating examination of Earth’s human inhabitants as seen through the eyes of a far more advanced civilization. What they observe is a relatively barbaric species consumed by materialism, violence, and spiritual uncertainty, along with feats of astonishing creativity, depth, and beauty.

Within our discussion, Nathan contrasts Linter’s statement that “the stakes are higher on Earth” to the Culture’s belief that our civilization is brutal and wild. Cezary notes the similarity between the Culture’s attitude and that of hunter-gatherer tribes in the Amazon that avoid contact with the West, as once you do there’s no going back. Daniel wonders about the frictionless lives of Culture citizens, and what they sacrifice in never experiencing true pain and suffering. Laura questions the lack of hope in the Culture, and Mary says that it might be hard to imagine a post-scarcity existence, but it’s sure fun to dream of it.

Disclaimer: Banks created a rich, dense fictional world in the Culture series, which might make this discussion a little tough to follow for folks who aren’t familiar with it. Plus, this is one of our older discussions, so there are a few glitches in the recording. That said, we had a good talk and Iain Banks was a great writer, well worth talking about, so please join us.

Listen to a dramatization by Paul Cornell from BBC Radio 4 on youtube.

Thanks to Christopher Nolen for our music.

If you have thoughts, recommendations, or questions that you want to send our way, please do via phificpodcast@gmail.com.
Hear more Phi Fic.