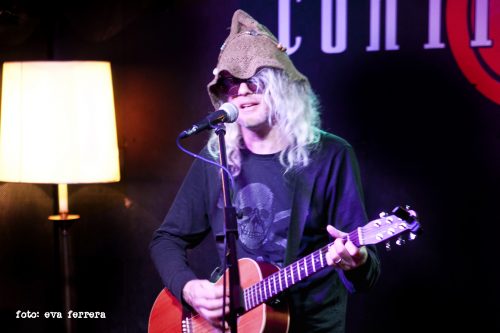 Californian-turned-British singer-songwriter Anton has released over 25 albums since 1993, generally moving from alterna-guitar-pop to colorful-pychedelic, but remaining tuneful.

We start by discussing "High Noon" from Magic Act

(2016), featuring XTC's Colin Moulding on bass and Michael Urbano (Smash Mouth, Cracker, et al) on drums. We then move to "Dust Beneath My Wings" by Three Minute Tease (Anton's band with Morris Windsor and Andy Metcalfe, who were Robyn Hitchcock's bandmates in The Egyptians and The Soft Boys) from the album of that name

(2011). That song was later released on the solo album Antronica

(2016), and we talk about the song's evolution. We then turn back to the title track from In the Village of the Apple Sun

(2006). Finally, we listen to another Magic Act tune, "Swindon." Intro/outro music is "King of Missouri" from the album of that name

Here's the official video for High Noon (which is the version from the podcast that includes the drum manipulation that Michael Urbano didn't like and shows both him and Colin Moulding). Here's "Love Is Onion," another song from Three Minute Tease that shows the warmth that Morris and Andy provided to later Egyptians albums (e.g., this song). Here's Three Minute Tease live. Here's the full Allyson Seconds version of Anton's "Dust Beneath My Wings." Here's the same song live in a sprightly rock-band arrangement with Allyson on backing vocals. Here's one of Anton's more synthy songs, "Clubbing in Berlin." Some more '60s psychedelic-type songs of Anton's include "Mushroom Box, 1975" (from In the Village of the Apple Sun) and "Black Lemon Sauce" (from Magic Act).