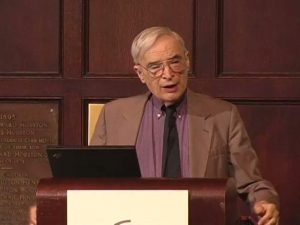 If one had to attach a name to the contemporary revival of interest in science and religion, the name would almost certainly be that of physicist Ian Barbour (1923–2013, pictured right). His 1966 book, Issues in Science and Religion, outlined four models for interaction between science and religion: conflict, dialogue, synthesis, and independence. These four models have provided the basic framework for discussion since. Today, “Science and Religion” is a thriving interdisciplinary field, drawing on the work of historians, theologians, scientists, and philosophers.

The first model, conflict, has already been alluded to in the previous article. When, after the terror attacks of 9/11, cosmologist Victor Stenger quipped that “science flies you to the moon, religion flies you into buildings,” he was expressing a conflict theory of their relationship. According to Stenger, religion is based on faith, which means belief in the absence of, and often in opposition to, reason. It is immoral to act in opposition to reason, and moral to act in accordance with it; hence religion is immoral, and science, as our preeminently reasonable activity, moral. A moral society is a scientific society, according to Victor Stenger.

Two other historical examples are especially prominent for the conflict thesis. The first is the trial of Galileo. Galileo was a pioneer in astronomy and the scientific method. He developed some of the first telescopes, microscopes, and the sector compass, and also made important observations of the stars and planets. He found mountains on the moon and moons around Jupiter. He also demonstrated that multiple centers of revolution existed within the solar system—not the one center assumed in Ptolemaic astronomy. More important by far, however, was Galileo’s insistence on quantifying observation. The Aristotelian “natural philosophy” of his day was based on qualitative notions, such as “heaviness” and “lightness,” or “tendency” and “aversion.” It was thought that these qualitative terms corresponded to real Platonic “essences,” adhering within the objects themselves, and thus described the most basic truths about them. When Galileo said that “the laws of nature are written by the hand of God in the language of mathematics,” he was proposing a research methodology—one that directed “natural philosophers” toward quantity rather than quality as their point of access to nature. This is such a commonplace in science today that it is easy to take for granted the gravity of the shift in thinking involved.

Famously, Galileo quarreled with the leaders of the Roman Catholic Church over the heliocentric theory. He believed, based on observation, that the sun was at the center of the solar system. But the Catholic Church taught, based both on Ptolemaic astronomy inherited from the ancient world, and on certain passages of the Bible (especially Joshua 10:13, where Joshua commands the sun to “stop in the middle of the sky” for “about a full day”), that the sun revolved around the earth. As a result of political maneuvering in Rome, the details of which cannot detain us, Galileo was ordered to stop teaching the heliocentric theory. When he defied the ban, he was put on trial and sentenced to house arrest. “It still moves,” he is supposed to have muttered, as his sentence was pronounced.

Today, political and legal battles over Darwinian biology persist, and, indeed, have broadened to include climatology, economics, and the biology and sociology of gender and race

The second major example for conflict theorists is the Scopes trial, and the continuing disputes over Darwinian biology and Creationism. In the 1920s, the modern fundamentalist movement was new, and emboldened by the recent war in Europe. Germany had been at the forefront of scientific progress, and had also rapidly secularized, during the nineteenth century, and the social Darwinist philosophies of some of its scientists and military leaders had convinced many American clergy that Darwinian biology had played an important role. They feared that if it were taught in the United States, it would both undermine people’s faith and lead to a coarsening of the culture, as it had, they said, in Germany. As a result, they pushed for laws to forbid it from being taught in the schools. When a teacher from a small town in Tennessee and the American Civil Liberties Union teamed up to defy the ban, a very public trial took place. Although commonly thought a victory for Darwinian biology, it really wasn’t. The teacher was found guilty and ordered to pay a fine, but the verdict was overturned on appeal. The real victory went to the fundamentalists, who succeeded in keeping Darwinian biology out of the classroom for another generation. For the textbook manufacturers and the local education boards, it made more sense to find a compromise than to double down on evolution. Today, political and legal battles over Darwinian biology persist, and, indeed, have broadened to include climatology, economics, and the biology and sociology of gender and race. So there is a narrative-historical element to the conflict model. From Galileo to Darwin to 9/11, there has been science and reason on one side, and religion and ignorance on the other.

The conflict model also typically (though not necessarily) entails commitment to several metaphysical theses. One is physicalism (i.e., materialism). A physicalist is a person who asserts the ontological primacy of matter—that everything that exists (to the extent that, in reality, it does) is composed of matter. At bottom, reality just is matter, however conceived. Some physicalists go on to make a stronger claim, that not only is matter the most fundamental reality, it is the only reality. Both typically (though, again, not necessarily) will agree on the methodological principle of reductionism. Reductionists assert that explanation should move upward, from smaller components to larger. Whatever is observed at a larger level of sophistication is, in principle, explicable in terms of its constituent parts. Hence the claim that “the whole is more than the sum of its parts” makes no sense. The whole just is its parts, and the system just is their interactions, according to reductionism. Nothing “emerges” from those interactions that is not accountable for in terms of the properties of the smaller parts. Combined with determinism, causal closure, the principle of sufficient reason, and some other theses that we may be able to explore in a future article, there emerges a picture of reality as a self-contained and exclusive reality, and of science as a self-contained and exclusive method of investigating it. This view might be called scientific naturalism—the general world-picture made up of a cluster of overlapping theses, which combine to assert that nature alone exists and that science alone genuinely informs us about it. When people complain about “scientism,” they’re complaining about scientific naturalism.

Well-known representatives of scientific naturalism and the conflict model included Carl Sagan, Edward O. Wilson, and, more recently, New Atheists like Daniel Dennett and Sam Harris. Ironically, they agree with their fundamentalist opponents, such as Ken Ham or Philip Johnson, on at least one thing—that science and theology offer competing and mutually exclusive explanatory models. They cannot coexist.

Ian Barbour criticizes the conflict model on “church-and-state” grounds. If, as Richard Dawkins has argued, Darwinian biology shows that atheism is true, then teaching it amounts to teaching atheism. It then becomes a question of constitutional law, whether teaching it, at tax-payer expense, violates the neutrality of the state in matters of faith and worship. Barbour (and many other commentators, atheist and theist) deny that evolution is intrinsically atheistic, or that it necessarily constitutes a challenge to theology just as such, though of course it does conflict with some theological perspectives. In future articles, we will explore some of the ways that Darwinian biology has been appropriated for theistic and atheistic worldviews.

According to Ian Barbour, both scientific naturalism and fundamentalism emerge from a search for certainty in a world of bewildering variety, frenetic energy, and relentless anxiety. In the latter half of the nineteenth century, conservative leaders in the Catholic and Protestant churches found infallible sources of authority—in the teaching magisterium of the Popes (at the first Vatican council) for the one, and in the “plenary (that is, word-by-word, line-by-line) inspiration” of Scripture for Protestants. Their churches were under attack, and needed to draw a line in the sand, in order to clarify for people both in- and outside their churches, what the nonnegotiable items of their faith were. Of course, not all Protestants or Catholics went along with these assertions at the time. There remains (characteristically) a tremendous variety of opinion among Protestants, while Catholics have largely accepted the doctrine of Papal infallibility.

For people who assert the scientific naturalism point of view, the authoritative point of reference is somewhat more difficult to locate. It is true, of course, that science is an open-ended process of exploration. Theories change in light of new evidence, and that is expected. Hardly anyone thinks that scientific theories are authoritative in the sense that Protestants who assert the plenary inspiration of Scripture think the Bible is, or that Catholics who affirm the doctrine of Papal infallibility think that the Pope’s pronouncements on certain matters of faith are, i.e., in the sense that they are settled truths that cannot change. Nevertheless, whatever the current scientific theory asserts has a way of being treated as, for all practical purposes, the “Truth-with-a-capital-T,” as something that has been settled in every meaningful respect. Dissent from the prevailing scientific consensus is frowned upon, to say the least, and the result is that both researchers and lay people who dissent from it face a hard struggle for credibility. In this way, an open-ended process of exploration delivers, in practice, an authoritative body of truth, one capable of providing a fixed point of reference in a bewildering and anxiety-ridden world—even if it is conceded that, yes, that consensus might change in the future. Ironically, the open-ended nature of scientific discovery both conceals and underwrites a very conservative approach to its results. For adherents of both a theological and a scientific naturalism perspective, managing the corrosive forces of change is a major challenge.

This essay is part of a series; the previous essay can be found here.

Daniel Halverson is a graduate student studying the History of Science and Technology. He is also a regular contributor to the PEL Facebook page.