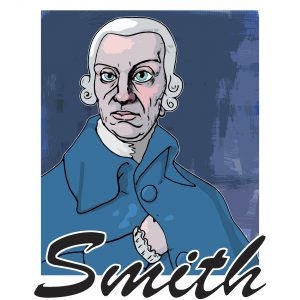 . We discuss the foundational text of modern economics, first published in 1776. How does the division of labor and our instinct to exchange lead to the growth of wealth? Is the economy sufficiently machine-like to enable us to manipulate its output, or at least to tell us how not to screw it up?

The selections we read were:

For more on Smith's moral views, listen to our ep #45. For a longer treatment, Econtalk recorded a six-part series on The Theory of Moral Sentiments. We also covered economics in our ep #123. For some potential alternatives to the stupefying effects of the division of labor, check out ep #83 on New Work and ep #103 on Thoreau.

Continues on part 2, or get your unbroken, ad-free Citizen Edition. Please support PEL!