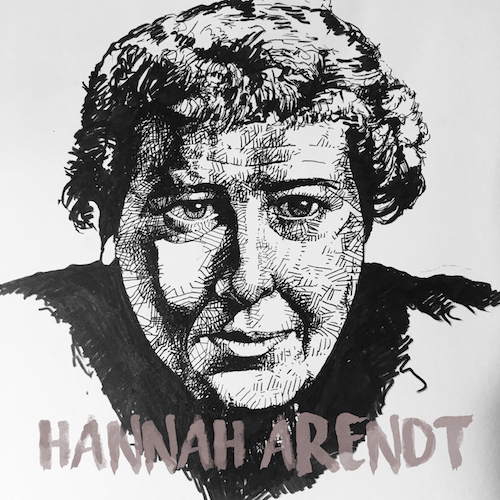 On Eichmann in Jerusalem: A Report on the Banality of Evil (1963).

Are we still morally culpable if our entire society is corrupt? Arendt definitely thinks so, but has a number of criticisms of the handling of the 1961 trial of Nazi war criminal Adolf Eichmann. Israel used the spectacle to remind people of the horrors of the Holocaust, but missed the opportunity to explore what would make a really rather ordinary man a party to such heinous acts. They were committed to the view that he was a monster, when the reality, says Arendt, is more frightening. He was really more of a clown: a status-obsessed, cliche-spouting, self-pitying bureaucrat who, far from having no moral compass, was extremely dedicated to obeying a warped version of the Categorical Imperative: "Act in such a way that the Führer, if he knew your action, would approve it."

She also had problems with the jurisdictional claim of Israel: Eichmann was tried by Israelis for crimes against the Jewish people. She thought that the Holocaust was not just the worst of a history of pogroms, but that genocide constituted a fundamentally new type of crime that needed clear philosophical analysis: The effort to snuff out a whole civilization is a crime against humanity as a whole beyond the individual murders involved. Arendt advocated for a permanent, international criminal court (which didn't materialize until 2002).

This constitutes a test case for our previous discussion of psychological situationism: In a situation where the whole society is oriented toward evil, then the pull of duty runs counter to one's conscience, which is reined in just like in ordinary circumstances one's disruptive impulses are reined in, because conscience is disruptive in that milieu. Eichmann could have chosen not to participate in the way that he did, but considered this unthinkable; abandoning one's duty in that way "just wasn't done." All dissenting voices had been silenced. “It was not his fanaticism but his very conscience that prompted Eichmann to adopt his uncompromising attitude during the last year of the war" (from Ch. 8).

Arendt still thought that he deserved execution, that we are responsible for engaging in concrete moral thinking—grasping other people as real others and not just as labels or roles—no matter what the environment. But she thought it important that we not gloss over factual details for the sake of making a political point: Eichmann was not in a position to have "masterminded" the Holocaust as was alleged, never pulled a trigger himself or directly ordered an execution, though he did order many deportations, even after his immediate superior had ordered that they cease, knowing full well that most of those deported would be killed. She also wants to be realistic about the guilt of those who helped the Nazis either through active cooperation (e.g., Jewish leaders who worked with the Nazis to provide them with information on the Jews in the area and their property, before the Final Solution was in evidence) or through inaction, and describes countries like Denmark where the "machine" didn't work because local officials would not cooperate in handing over their Jews, and troops on the ground didn't have the heart to press through such resistance.

The full foursome tries to figure out why we assigned ourselves such depressing holiday reading and whether we in the modern day might be subject to any kind of comparable moral blindness to what was going on in Nazi Germany. How slippery is the slope when you start considering your main social ill the "problem" of immigrants? Does loyalty to a leader commit one to denying obvious truths that the leader denies?