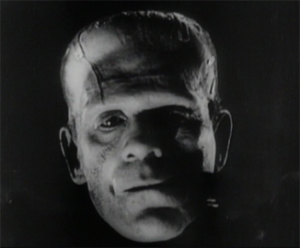 What of the creature himself? Thus far we have treated him primarily as if he were a part of Frankenstein—as the product of overweening ambition, self-creation gone wrong, and incestuous family ties. But in touching on the broader predicament of being something that is created, we also touch on the role of creature as child. On first blush, the childhood of Frankenstein’s monster seems to have been very different than the perfect childhood of Frankenstein. Abandoned by his creator, the creature must raise, educate, and socialize himself. An astonishingly, implausibly agile learner, he receives this education through the crack in a boarded up window, spying on a family whose troubles and affections seem straight out of a fairy tale, complete with a visitor who approximates an Arabian princess. The point of the fairy tale is that the family be easy to idealize from afar. Via this idealization, the creature can treat them as surrogate, long-distance parents, despite the fact that they are unaware of his existence. From them, the creature learns language, morals, history, and culture. He caps this education by finding and reading three books, including one that will turn out to have many parallels to his own story, Milton’s Paradise Lost.

As I have pointed out, before Walton’s encounter with the creature one might have made the case that he is Frankenstein’s fictional rather than scientific creation. Exhibit A would have been the uncanny similarities between the childhood stories of Frankenstein and the creature. Both come up under the influence of a fairy tale family, a family of perfect givers and perfect sufferers. Both, in a way, are autodidacts who have been left to their own devices, Frankenstein because of the liberality of his family and the creature because of the partition that separates him from his. Both talk of having a special relationship to the beauty of nature, which has the advantage over human relationships of not involving rejection or loss. Both come to think of themselves as the most miserable creatures on the face of the planet, one for having his loved ones annihilated and the other for never really having them in the first place. Finally, both lament the fact of having sensibilities more developed than that of animals, of needing not just food and shelter but human contact. They differ in that the creature’s wretchedness is more visible than Frankenstein’s—etched as it is into his outer form—and much more explicable. One of them had the perfect childhood, and one of them was abandoned. Nevertheless, these similarities give us reason to believe that in the creature’s story there is a more accurate retelling of a sinister dynamic concealed in Frankenstein’s. The most critical commonality is the charged presence of an ideal family, with one creature too close to the electricity, and the other too far away.

The creature’s education creates new problems: “Sorrow only increased with knowledge.” Knowledge is a problem in part because socialization creates new needs. The creature has fallen in love with his quasi-family, and he wants to be loved back, something he believes to be unlikely given his hideousness and “stature gigantic,” to which human beings have generally responded with attacks. The result is a being who, while not completely feral and unsocialized, as the creature might have been, is damaged in one tragic and crucial respect: the degree of his desire for social contact is not matched by the quality of his social desirability. His solution to being “solitary and detested”—one that sounds like a sort of dementedly honest online dating ad—is to have Frankenstein create for him a “creature of another sex, but as hideous as myself,” with “the same defects,” “with whom I can live in interchange of those sympathies necessary for my being.” The monster needs a girlfriend.

And so where Frankenstein spends the entire novel trying to evade the domestic scene, including his pending marriage to Elizabeth, the monstrous distraction he created for the purpose of this evasion insists on being restored to this very scene. For Frankenstein, it is a confining scene: Domestic affections make us “more necessary beings,” which is to say less free and more subject to the pain of loss. But for the creature, the domestic scene provides constitutive relations without which he cannot be whole.

Being a creature—being created—is just a beginning. Some creatures need fellow creatures, and in extraordinary cases, finding one requires an application to the creator. Despite the abuse heaped upon him by Frankenstein, the creature makes this request in the vernacular of Milton’s Satan, a sort of soothing eloquence that belies the agony it tries to communicate. Responding to Frankenstein’s “relieve me from the sight of your detested form,” the creature holds his hands over his creator’s eyes and responds with a touching “thus I relieve thee my creator.” He is willing not to be seen if he can be heard, to be scorned if he is given the chance to justify the ways of monsters to men by explaining his wickedness in terms of the circumstances of his unhappiness, which ultimately have to do with the deficiencies in his construction and the limitations of his creator. And so the creature makes the case for being made happy, for being treated not as Satan but as Adam.

Revenge is the inverse of reproductivity: instead of borrowing the creator’s generative power, it arrogates his destructive power.

God compensates Adam’s creature-hood by giving him a mate. Beyond the companionship this affords, the compensation for being created is to be conferred something of the power of the creator, which turns out to be the ability to reproduce. This is a story that can be retold in a Promethean context, as the character of Aristophanes does in Plato’s Symposium: Sexuality is the result of the gods punishing human beings for attempting to usurp the (presumably creative) power of the gods. Human beings, originally hermaphroditic and whole, are divided into two sexes, which leads them to long to be made whole again. The ability to produce children was given to them by Zeus as a benevolent afterthought, a way of sparing these divided beings too much misery by making their yearned-for unity more complete than mere coitus would allow. Socrates amends this account, making reproduction of all sorts—including thinking and artistic reproduction—not merely a consolation prize, but the central goal of Eros.

Once Frankenstein refuses the creature this consolation prize, the creature promises revenge. Or in his phrasing, “revenge remains”: revenge is what remains when love is taken away. Revenge is the inverse of reproductivity: instead of borrowing the creator’s generative power, it arrogates his destructive power. The point is at least to produce an effect: if not love and gratitude, then fear and remorse. When he tells Frankenstein, “I shall be with you on your wedding night,” this is the creature’s way of obtaining his wish by being involved in a debased form of the procreative act. Similarly, the glory that Frankenstein might have achieved is an extreme and lopsided form of the mutual recognition that is constitutive of self-conscious creatures. When recognition is expansive and asymmetrical—as it is when we achieve glory or infamy—it seems to transcend the cloying, determining, and trapping possibilities of more ordinary exchanges, leaving us with the illusion that we can live both with other human beings, and without them.