This essay is the fifth in a five-part series, in honor of the 200th anniversary of the publication of Mary Shelley's Frankenstein. Part four can be found here. 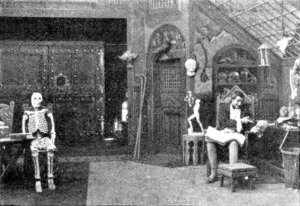 Consider Mary Shelley’s task. In a competition with great poets, one of whom was her future husband, she was asked to create a ghost story. Instead, she created a story of excessive ambition as the ghosting of the self. Worried at first about whether she could come up with a story at all, she wrote a tale about the perils of being both creator and creature, one reflecting anxieties of influence that can become especially acute to the would-be artist. Instead of writing a ghost story, she wrote an early work of science fiction that proudly displays the influence of what is arguably the ultimate source of the genre, Paradise Lost.

And instead of having her ghosts appear as they usually do, of their own accord—from the rafters or the grave—Shelley has her protagonist create his own. In a typical ghost story, ghosts are not creatures but creators. We might think of them as the spirits of our ancestors—our biological and cultural progenitors—returning presumably because they are unhappy for our hanging on to the luxury of life when they have been forced to give it up. They reflect the anxiety that living must come at the expense of the dead, and youth at the expense of old age, leading to the return of malign, retributive forces. They speak to the notion that in creating us, our creators have handed their vitality over to us, and may come to regret this decision and want it back. In Frankenstein, it is creature rather than creator that returns from the grave, not to retrieve vitality but to complain of the monstrosity of being created.

Once we read the creature as not just a literal but figurative expression of the creator, then the ghost re-inhabits its typical role. The monster is the return of devitalized creator, where the loss of vitality represents a failure of creativity driven by an inability to tolerate the imperfection of the creative process. Creativity collapses into self-creation. This failure is driven in part by the creator’s anxieties about her own status as a creature, the product of some creative process. Ideally, creativity overcomes or manages such anxieties. But sometimes it is infected by them. The trick is to harness some of the grandiosity that provides the electrical jolt for bringing creative work to life, without letting this grandiosity overwhelm us to the point of producing something grotesque.

To be a creature—of the human, self-conscious sort—is to walk the fine line between two sorts of monstrosity. On the one side, to be a social being is always to be faced with the prospect of not getting the sociability we need: of being an outcast. Because such social ties are constitutive, the threat of being an outcast is the threat of being psychically destroyed. On the other side, constitutive social forces can become entrapping. One attempt at a solution is, like Frankenstein, to simply try to fly away: to try to transcend the predicament altogether, become perfectly independent and self-creating, and be a creator par excellence. This solution does not work. In this, the anxieties of creature-hood have invaded the creative act. Another solution is to put all one’s hopes, like Frankenstein’s creature, in being loved. This solution does not work either. The middle ground is very simply the activity of loving, and the creativity it implies. In Frankenstein, the prototypical instance of such love is love of nature: it cannot love you back, but nor can it reject you. But there is no husbandry in this relationship, and no reproduction. More to the point are creative acts that aspire not principally to greatness but to their own activity—to the reproduction of an experience. These cannot complete us, or our desires. They cannot make us feel as though we are loved without condition, as by a parent or a god. But in replacing being loved with loving, they give us everything we can hope for: an adult form and a pair of wings, not for reaching the stars, but for making our way from flower to flower.