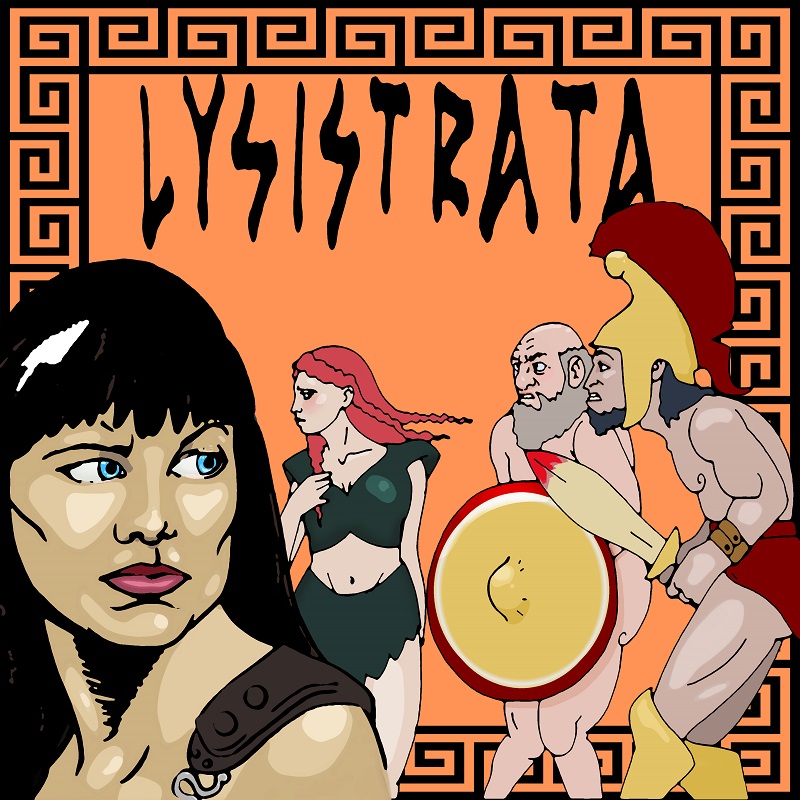 Mark (old men's chorus leader), Wes (old men's chorus and Athenian), Dylan (old men's chorus), and Seth (Spartan sentry) are joined once again by TV's Lucy Lawless (Xena Warrior Princess, Ash vs. Evil Dead, Spartacus, Battlestar Galactica, etc.) as Lysistrata and Broadway's Bill Youmans (hear his past performance for us of Crito) as the Athenian magistrate and Athenian ambassador. Plus, new fan Emily Perkins (she was the girl in the TV mini-series of Stephen King's It and starred in the Ginger Snaps movies) as the young Athenian wife Myrrhine as well as the Spartan Lampito and several other small old- and young-woman parts. (The young women are holding the sex strike while the old women have taken over the treasury in the Citadel of Athena to stop funds from going to the war.) Bill brought along his fellow cast member in the current Broadway production of Carousel, Erica Spyres, to play Lysistrata's co-conspirator Calonice, the old women's chorus leader, and other parts. Finally, actor/musician Aaron David Gleason (also featured on the Nakedly Examined Music podcast, episode 71) joined in to play the young Athenian soldier Rodney Balling (husband of Myrrhine) as well as the Spartan ambassador (who sings!) and joined the old man's chorus.

We start out by giving a bit of historical context and explaining some of the weird conventions of the play, then give a "cold read" of the full script (meaning this was not rehearsed, though the result has been edited to smooth things out and add some sound effects and a little music), then talk for another ten minutes after we're done about what we just read. Is this the feminist tract that history presents it as?

This was performed via remote conference call. Each participant recorded him- or herself locally, which explains the difference in sound quality among participants, but I've done my best to smooth everything out. The giggling and a few actual scene-breaking comments were carefully left in, though, to help convey how damn fun this was. Henderson's translation uses a modern idiom (so this doesn't sound like Shakespeare, which would be just as remote from the original Greek as what you're hearing here), and presents the Spartan foreigners as having Russian accents.

We'll be releasing as Partially Examined Life episode 188 a full discussion of the play, bringing back Lucy and Emily as guests to help us work out the relation between feminine power (and sex) and politics both for the Ancient Greeks and for us now. What does it really mean to say "make love not war," and does the increasing presence of female political leaders portend any changes of the sort that Charlotte Perkins Gilman predicted?

We're pleased to bring you this performance without commercial interruptions. Why not respond in loving kind by tipping some pennies into the hat?

If you enjoy this, check out our past PEL Players productions: Antigone (feat. Lucy Lawless and Paul Provenza), No Exit (feat. Lucy and Jaime Murray), and (if you're desperate) Plato's Gorgias (feat. no real actors whatsoever).

Lysistrata image by Solomon Grundy. You can still get our 2017 wall calendar of his art at partiallyexaminedlife.com/calendar.