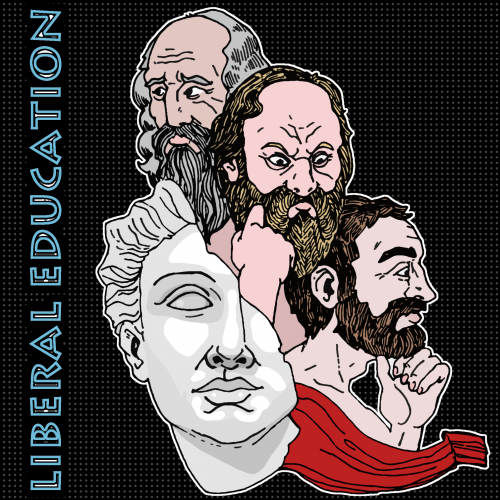 Dylan returns to St. John's College, Annapolis to bring its president into dialogue with the PEL clan about Jacob Klein's “The Idea of a Liberal Education” (1960) and “On Liberal Education” (1965), plus Sidney Hook’s “A Critical Appraisal of the St. John’s College Curriculum” (1946) and Martha Nussbaum’s “Undemocratic Vistas” (1987).

Ep. 192 got us talking about a great-books-oriented education, and this discussion tackles that issue head-on: What constitutes a liberal education? Klein (a former Dean of St. John's) describes the process of metastrophe (fundamental change), where you take the familiar and make it strange; you contemplate what you used to take for granted. Seeing thinkers of the past grapple with the concepts ancestral to the ones we use now, whether in the areas of science or politics or whatever, makes us question these current concepts and ultimately understand them better. Klein even has a story about how metastrophic questioning was necessary for these modern disciplines to be founded in the first place.

Hook witnessed the first generation of Johnnies and was very critical of this idea of the same menu of ideas for all students, with a heavy emphasis on the history of science (rather than current, practical science) and learning ancient languages (as an exercise in translation and seeing how alien different languages are, not to be able to actually speak to anyone). He thought that study of the past should be guided by the concerns of the present, not insulated from them. What sense does it make for a student to know more about the political structure of ancient Greece than that of his or her own country?

Nussbaum's article is a New York Review of Books article about Bloom's book. She stresses contra Bloom that a philosophical education is practical, and that it should be made available to everyone. The SJC curriculum was (as Hook describes) originally advertised as the model that all colleges should follow, but time (and/or realism) has seemingly dampened that ambition. So, is there a single history of the intellectual life of the West that we Westerners would be well advised to study, maybe just adding a couple of authors who are not dead white males to modernize it a bit, or is a more thorough break from this idolized past needed? Or is the whole idea of a "best" education for all just ill-advised? Do people really need to read the Western canon at all?

Don't wait for part two; get the full, unbroken Citizen Edition now. This will also get you access to the follow-up discussion to be released within the next week: Wes and Dylan discuss articles by Richard Rorty and Leo Strauss about liberal education and democracy that were originally on our reading list for this episode, but were deleted due to too many things to read that weren't exactly on point. Please support PEL!

Sponsored by Molekule, the only air purifier that actually destroys pollutants. Visit molekule.com and use offer code PEL for $75 off.