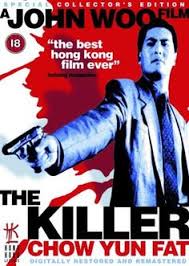 John Woo is synonymous with Hollywood blockbuster action films, or what in Hong Kong was referred to as the Heroic Bloodshed genre: tempestuous plots, explosive action scenes, and shootouts that often end with two empty guns. No one will argue with that. But is John Woo really that simple?

Anyone reading this has probably already anticipated the obvious “no” that follows my rhetorical question, but what of it? What exactly makes Woo’s action films interesting enough for an inquiry? His films are actually more about ethics than explosions.

Let’s take his 1989 masterpiece The Killer. The plot is simple: a professional hitman completes his final hit, but in doing so, disables a singer. Of course, the hitman has a golden heart, so he decides to take her into his care. After all, being blind, she can’t identify him. There’s a lot of other incidental details here and there, but the other most important aspect of the narrative occurs after Chow Yun-fat’s character, Ah Jong (the killer), runs into the detective (Yi Ling) assigned to his case, played by Danny Lee. Seeing that this cold-blooded killer has taken one of his victims into his care, Yi Ling becomes captivated by Ah Jong’s morality.

The point is that Ah Jong has a dense system of ethics that somehow seems unaligned to his profession—his ethics seems to transcend his position in the social order. Lee understands this perfectly. The film’s final scene appropriately takes place in a church, conveniently accentuating the narrative’s obsession with moral comportment. This church-based scene ends with a shootout where both the noble killer and his lover are slain, but the villain—the boss of the triads—survives. He even asks to be taken into custody as the police arrive, a request that is easily granted and in accordance with the system. Aggrieved with this outcome, police detective Yi Ling takes the law into his own hands and executes the triad boss in cold blood. The police surround him, and the credits roll.

Yi Ling’s climactic choice is obviously unlawful, or at the very least, illiberal, but most viewers probably sympathize with his actions. Why? It’s because John Woo’s The Killer persuades its viewers into its own ideal ethical world. Both Yi Ling and Ah Jong share a mode of social being that goes beyond the trivialities of their own profession. They are both antibureaucratic and skeptical of institutions. They believe they are responsible moral agents who cannot be persuaded that right or wrong can be dictated by those from above, like a police chief or politician. The elite, they might be saying, do not have a monopoly on morality. This message undoubtedly rings a familiar sound to North Americans as well, especially with the contemptuous anti-elitist atmosphere in the recent American election, but Woo’s themes are also uniquely Chinese. John Woo’s The Killer is a Confucian action film.

What do I mean by that? Confucian ethics are usually understood as being a form of situational or virtue ethics. In Book X of the Analects, Confucius’s followers wrote of how the revered sage would act in a quotidian environment. Much like how the first few parts of the New Testament are brief accounts of how Christ responded to different moral dilemmas, the Analects presents a similar picture for its readers and followers to imitate. In Chinese philosophy, the term junzi is the ideal ethical being: in this respect, Confucius is an exemplar of the perfect citizen.

In Book X of he Analects, we are told of how a junzi should act in daily social life. We are told that when a stable was burned down, Confucius immediately left court and arrived at the scene in order to inquire whether any person was injured, without inquiring about the horses. While some animal rights activists might wince at the implications of this chapter, the point here is to emphasize how highly Confucius valued any human life. In another account, we are told how Confucius acted in court, in private life, and so on. We are even told how we should dress. The point of these expressionistic pictures is for followers to absorb exactly what constitutes virtuous behavior.

If a follower were interested in learning how to become a junzi, then he or she would ideally copy these certain sets of behaviors in order align his or her moral compass with the one set out in these pages. This is what Aristotle refers to as virtue ethics: the imitation of an already virtuous person. Undoubtedly, what counts as a virtuous person and why one’s system of beliefs is somehow superior to others already opens up the specter of relativism, but that’s the yolk of all imitative ethics.

What The Killer seems to be suggesting in this respect is that Yi Ling is learning virtue from Ah Jong, and in turn, we’re learning from them both. That’s why we can sympathize with the clearly unlawful action performed by someone assigned to defend lawfulness. Yi Ling goes out of his way and administers his notion of justice—a notion that transcends any institution. He mimics Ah Jong’s unlawful morality but arrives at a decision that seems perfectly acceptable to Woo’s audience, precisely because his audience has slowly been persuaded into adopting both Ah Jong’s and Yi Ling’s ethics, making the unlawful anti-institutional individual into the junzi.

Another important kernel of Confucian ethics is the concept of ren. In Book XII, when one disciple asks Confucius what the meaning of ren is, he simply defines it as the love of others. This brief response lays out the altruism inherent in Confucianism. Ren is a basic human instinct that can be cultivated in order to yield virtuous results. Such altruism can also be found in Yun-fat’s character. The film begins with his final contract killing, but as soon as he realizes that the singer he accidentally disables needs an operation she cannot pay for, he takes it upon himself to pay for it himself. This is his redemptive act, but it’s less Christian than Confucian: he paradoxically engages in another killing in order to save an innocent human being—an act that might be a hitman’s only path to altruism.

I have, of course, been avoiding the most complex issue here. What about the act of killing itself? What Confucius says about that is rather interesting in relation to Woo’s film. In Book XII, a government official asks Confucius about the nature of killing. In a famous passage, someone asks Confucius if the government can kill the unjust in order to protect the just. The sage’s reply is ambiguous. Why should the government need to kill people? As long as you desire good, the people will also be good. Confucius here seems to be at odds with The Killer, but our contract killer is obviously not a representative of the government—Yi Ling, however, is part of the police force. Confucius would disagree with Yi Ling’s decision to execute the unjust in order to avenge the just. With that, we can see where Woo doesn’t directly see eye to eye with Confucius. Woo might even be rewriting Confucian ethics for a new age.

By now, we should see that Woo’s film is a pop-cultural take on Confucian morality. It’s very clear that Woo isn’t simply directing an action film; or rather, maybe the action films we often assume as meretriciously simple have deeper layers of complexity that often elude our surface viewings. But one thing remains certain: John Woo’s film is just as philosophical as Plato or Nietzsche in its exploration of Confucian ethics. What this film shows is that some of the most seemingly mundane products of culture are actually saturated with philosophical arguments—ones that we are unconsciously persuaded into believing.

Edward Sakowsky is a recent M.A. graduate from the University of Toronto and a prospective law student. He is also both a freelance writer and scriptwriter.