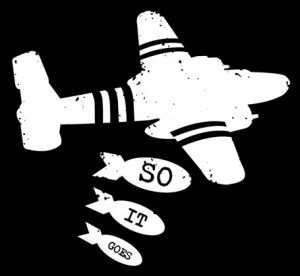 Slaughterhouse Five is a story about war, yet one that seems to advance the thesis that there can be no war stories that don’t entirely falsify the experience and significance of war.

That falsification is effected by the way in which such stories a) make war the pornographic object of prurient, sadistic interest; b) glorify war, representing as powerful and heroic what is really a state of total, infantile helplessness; c) depict something inherently impersonal—the massacre of enormous numbers of anonymous human beings—as a personal struggle between well-defined characters, protagonists and antagonists; d) explain—via cause-and-effect plotting—something that is inexplicable.

Why is war so hard to talk about? For one thing, it can be severely traumatic, constituted as it is by attempts by human beings to banish each other’s life stories from space and time and experience. Survivors escape with their lives, and so escape this banishment on a physical level: but psychologically, they may become, like Vonnegut’s Billy Pilgrim, “unstuck in time.” In the form of flashbacks, their memories of trauma seem less like memories than re-experiencings. In acting on trauma—often in repetitively self-destructive ways—they operate on a kind of unconscious procedural memory that, in its failure to meaningfully link representations, has a timeless quality. Ultimately, they fail to make sense of their experiences and actions in terms of temporal cause and effect: which is to say, in terms of a plot. They fail to resolve their trauma by telling its story.

As the locus of total helplessness and violation, perhaps trauma cannot be accurately represented within a narrative, the very essence of which is to supply a sense of power and mastery by fitting raw experience into a causal framework. And so, Vonnegut seems to say, the only thing that can be said about trauma involves something like the pre-linguistic, senseless utterances of birds: “poo-tee-weet.”

How, then, does Vonnegut tell his story at all? He has a few strategies that might be seen as sublimated versions of various psychological defenses:

Where do we find all of this in the text? Do these strategies actually work? What do they have to say about how we might deal with trauma in our own lives? We discuss these questions and more in Episode 2 of (sub)Text.

Buy the book: Slaughterhouse-Five: Or The Children's Crusade, A Duty Dance With Death