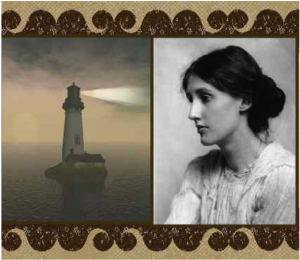 It was a house full of unrelated passions.
–To The Lighthouse, by Virginia Woolf

In the incredible novel To the Lighthouse, Virginia Woolf takes us to Hebrides on the Isle of Skye off the coast of Scotland, where the Ramsey family retreats during the summer. The novel is not driven by plot but rather through the consciousnesses of many of the characters. Mr. and Mrs. Ramsey and their eight children are at the house where we hear much from their son James, who is anxious to visit the lighthouse, but is curtly denied by his father due to the weather. A number of guests arrive to spend the summer with them, including Lily Briscoe, who is planning to paint a portrait of Mr. Ramsey and James.

There he sat with his hand on the tiller in the sun, staring at the Lighthouse, powerless to move, powerless to flick off these grains of misery which settled on his mind one after another. A rope seemed to bind him there, and his father had knotted it and he could only escape by taking a knife and plunging it…

The novel is in three sections—The Windows, Time Passes, and The Lighthouse. The story covers ten years, through the death of Mrs. Ramsey and two of the children, finally ending with the long-awaited trip to the lighthouse. Meanwhile, Lily Briscoe, one of the few guests who have returned to the summer house, remains there while the rest of them sail off, finally finishing her long-labored painting.

Considered one of the top 100 English-language novels, To the Lighthouse is seen as an autobiographical exploration by Virginia Woolf of her summers with her family, in St. Ives in Cornwall, until the death of her mother. Her sister Vanessa said she was “Transfixed by the portrait of their mother, [that] ‘It is almost painful to have her so raised from the dead.’”

This discussion first appeared in our Not School Group and the readers at the time were Nathan, Laura, Daniel, and Dan Johnson. As an early recording, please bear with the sound quality—many thanks!

A film based on the novel was released in 1983, and is described as a faithful rendition of the novel. It stars  Rosemary Harris, Michael Gough, Suzanne Bertish, and Kenneth Branagh.

If you have thoughts, recommendations, or questions that you want to send our way, please do via phificpodcast@gmail.com.
Hear more Phi Fic..
Thanks to Chrisopher Nolen for our music.