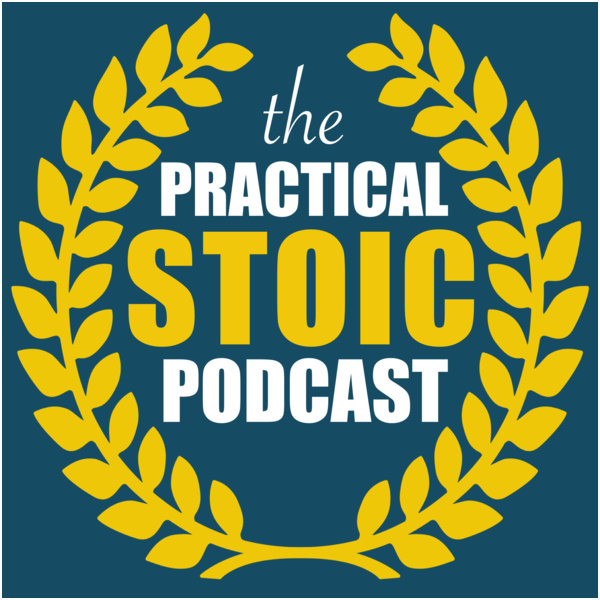 In preparation for our episode #201 with Ryan Holiday about Marcus Aurelius, our third bout with Stoicism, I have been listening to many episodes of The Practical Stoic podcast, which features among other things, very good interviews with Ryan, with our previous guest Massimo, and with friend-of-our-podcast Gregory B. Sadler. If you're looking for a quick historical overview of Stoicism, try this episode. The host, Simon Drew, is unrelentingly positive, and I encourage anyone into self-help, "daily affirmation"-type podcasts to check it out.

I think an opponent is often useful in clarifying your rhetorical stance. It doesn't matter if this opponent is largely a mirage: It provides a surface that you reject and hence launch yourself in the direction you want to go. In our early episodes here at PEL, one of these opponents for me was academic philosophy itself: that there's something sickly about specializing, about devoting yourself to a small corner of academia, about secreting yourself in an ivory tower.

But what was I rejecting, really? My experience in jobs outside of academia was largely miserable. As far as the choices actually available to us go, I certainly don't fault anyone for pursuing that life, and there's certainly no pressing save-the-starving-children type of work that I prioritized as an alternative to a life of teaching and writing and researching.

No, what I was trying to do was to carve out my own view. Following what I learned through training in analytic philosophy, you need to actually look at arguments and not hero-worship their sources. Both as pedagogy and as a tool for re-integrating philosophy into my own life, I had to try to get that the "real-world" impact of what we were reading. A primary part of this approach is to prioritize the reader's point of view: To understand that what you take away from a work is what matters, not what it actually says, much less what scholars say that it says.

I still think this is a legitimate point, and well worth elaborating every once and a while, possibly still foundational for PEL, but harping on it quickly got old. It certainly doesn't centrally inform the way that I now try to prepare for episodes, which is not just to read them and channel my gut. I'm not consistent in how much I rely on secondary sources, but, time and energy permitting, I'll take all the help I can get.

In short, you create an opponent to help you focus yourself: I am not this. But then soon enough, you think further and acknowledge that "this" has something to offer, that "this" is not so foreign after all, that you are maybe as much "this" as anything else.

Some fans of Philosophize This! define their affection for Stephen's work on that podcast in opposition to ours: He is actually clear, concise, easy to follow, lays out the practical upshot of the philosophy, never gets pulled into the weeds, and always frames his project in terms of the positive desire to learn more and become better. But Stephen himself is an avid PEL fan, seemed to enjoy his time in the weeds with us, and has described his podcast as training for ours.

On the similarly user-friendly Practical Stoic, Simon embraces philosophy as central to life: It is the pursuit of wisdom and the good life, the desire to eradicate error, overcome our unexamined acculturation, and rise above the social pressures that continually foist false values like the pursuit of money, fame, and fashionability on us. Simon's opponents here are many and various, but among them is the type of philosophy that he characterizes as "mind games" and "word games." It's people showing off their intellectual acumen, and so involves arrogance. It's divorced from immediate practical application: puzzles (presumably) like the efforts to prove the existence of other minds and physical objects, and word games (presumably) like the pursuit of definitions, making fine distinctions, creating formal logical languages, etc.

I say "presumably" because I don't see any evidence that Simon has looked into any of these philosophical topics outside the relatively small world of Stoicism. And I don't think one can really claim to be a follower of philosophy and yet have decided in advance of inquiry what boons philosophy will bring, how it will change one's mindset, what vistas might be unveiled.

Contra to our treatment of Stoicism in our Epictetus episode, where we pointed out things like Epictetus's disdain of laughter and the strong implications that you really shouldn't put much energy into relationships, into your physical body, into ambition, Simon's approach (in common so far as I can tell with Ryan Holiday's) is that the modern Stoic should pick-and-choose to create a philosophy to serve his or her goals, that Stoicism provides tools to help control your life, for example in pursuing physical fitness, deepening your relationships, overcoming creative blockages, and avoiding distractions to your life's work. Insofar as dwelling on philosophical problems is an avoidance of life, a way to pump up your ego, to "mentally masturbate" (not Simon's phrase), then this should be avoided on practical Stoic grounds.

However, among the virtues that Simon praises (and presumably practices) are openness to new ideas, humility about the state of your current knowledge, curiosity about different points of view, and constant self-examination. Philosophy for the curious Stoic should presumably not think that it knows all the answers, that Epictetus was Jesus and got it all right, so that we need only imitate him. Turning to philosophy for solace should be a matter of turning to a mind-enlivening activity, not to a set of established doctrines that need only be repeated daily to redraw one's brain after a predetermined image.

Even wanting just to know more about Stoic doctrines involves entry into authentic philosophizing: What is it to live "in the way of nature"? Many Stoics talk about this as living in accordance with God's greater plan, which we can see in how things actually happen: Accept fate. But is there actually such a "greater plan"? Or are we better off taking Schopenhauer's Stoic attitude that denies this and uses Stoicism to live in the lack of such a plan?

In trying to live in accord with nature, what should my attitude be toward my natural impulses? We presumably want to get past our momentary whims and live in accordance with our deep nature, what we really want when we really think about it. But is this a matter of getting at our underlying teleology, or is this a matter of rewriting our teleology (programmed by natural selection) in accordance with Reason? Stoicism follows Plato and Aristotle in wanting our rational nature to dominate our animal nature, but is that goal actually wise, or does it profoundly misunderstand both the nature of rationality and the nature of our own psychology? Does Reason actually dictate certain particular goals, or does the famous Is-Ought distinction undermine this?

We are creatures trying to make sense of ourselves, which involves trying to understand political structures, what ethics actually is (i.e., we need to study meta-ethics), what language and truth are, what this world is that we're living in (not just what science says it is, but how to interpret science, what science actually is and how it relates to metaphysics), and what our minds are. We may not get very far in these sprawling woods, but we should not fear to venture out into them, and doing so certainly isn't a matter of "games" (though it can be playful!), nor is it a matter of showing off or idleness.

For both PEL and The Practical Stoic, disdaining a largely imaginary opponent was a matter of pushing aside some perceived pile of bullshit to focus on something important, to present a view that would be a needed antidote to some particular cultural strain. But growth means outgrowing some of the tools that were needed at an early stage, and there is no need for any practical philosopher to permanently disdain the other strains making up philosophy as a whole. Come out into the weedy woods with us!